The EU's chief negotiator Michel Barnier will seek a full exit agreement with Britain, provided a solution is found to keep the Irish border open. Otherwise, Britain faces a no-deal, no transition divorce from the bloc. 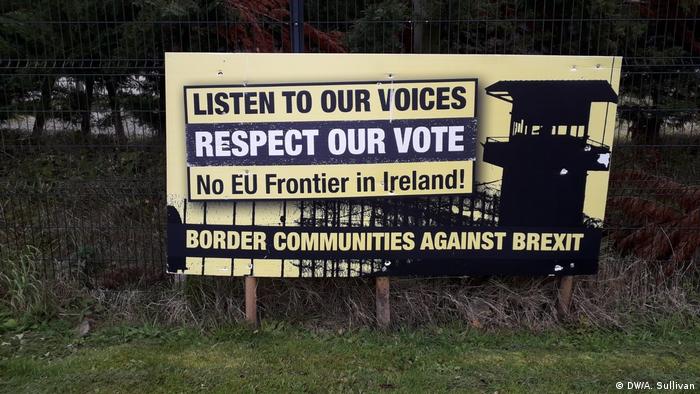 The European Union will not approve a Brexit deal unless it permanently avoids a hard border between Ireland and Northern Ireland, the EU's chief negotiator said on Tuesday.

Michel Barnier's comments lay bare the EU's unequivocal position on the situation in Ireland after the UK leaves the bloc.

British Prime Minister Theresa May told her cabinet that she was not going to accept a Brexit deal "at any cost."

"This includes ensuring that, if the backstop is ever needed, it is not permanent and there's a mechanism to ensure that the UK could not be held in the arrangement indefinitely."

Irish Prime Minister Leo Varadkar said he was willing to explore backstop solutions so long as they did not allow the UK to unilaterally walk away from an open border.

What is the backstop? The so-called backstop is a plan to keep the Irish border open even in the event of no final deal on the issue. It would keep Northern Ireland in the EU Customs Union and large parts of the single market, creating a de facto border in the Irish Sea. The Northern Irish Democratic Unionist Party, which props up May's Conservative government, strongly rejects the idea, as it would threaten the integrity of the UK and increase chances of a united Ireland  — a red line for most Unionists.

Why is an open border so important? In the late sixties, tensions in Northern Ireland between mostly Protestant loyalists and mostly Catholic nationalists boiled over into a 30-year guerilla war known as The Troubles. In 1998, after more than 3,500 deaths and almost 50,000 injuries, peace was brokered with the signing of the Good Friday Agreement. A fundamental part of that deal was the opening of the century-old Irish border, allowing Irish Nationalists to feel a part of Ireland and letting Unionists continue their wish of staying in the UK. Victims of the conflict fear that closing the border could reignite sectarian tensions, which still bubbles beneath the surface today.

The Irish border is the final sticking point in the EU-UK Brexit negotiation, with the future of the frontier far from certain. That is causing worry for businesses north and south, as Arthur Sullivan found out. (01.11.2018)

Alexander Stubb wants to become the next president of the EU Commission. But does he have what it takes to tackle rising populism and bring together a deeply divided continent? He spoke to DW's Conflict Zone. (24.10.2018)

Northern Ireland: Anyone running the region?

Northern Ireland’s assembly collapsed in a row over a botched renewable heating scheme in January 2017. More than 600 days later, the province still has no functioning government. Peter Geoghegan reports. (13.09.2018)