Brexit causing concern for business on both sides of the Irish border | Business| Economy and finance news from a German perspective | DW | 01.11.2018 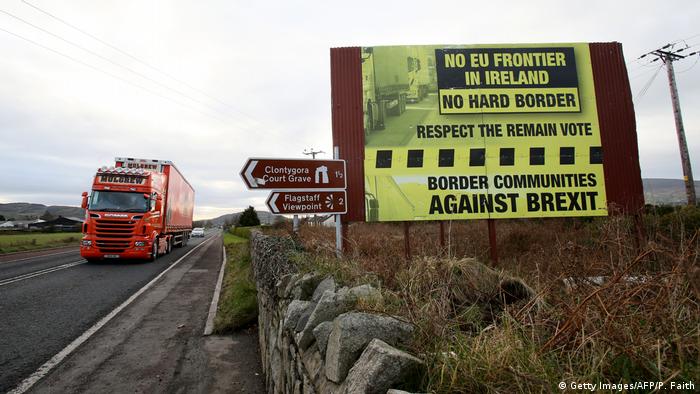 Dublin's Convention Centre — a shining new building on the banks of the River Liffey, designed to look like a giant glass being tipped over —  was abuzz with activity.

The latest "Getting Ireland Brexit Ready" workshop was in full swing, one of several such events taking place in Ireland at the moment aimed at helping businesses prepare for the UK's forthcoming exit from the European Union.

Enthusiastic volunteers provided people with nametags and pointed them towards the next panel discussion. Business leaders manned stalls, armed with leaflets and advice. Leo Varadkar, Ireland's 39-year-old Taoiseach (prime minister), even dropped by. Who knew planning for Brexit could be such fun?

Except it's not really much fun. Ireland has plenty at stake when it comes to the UK leaving the bloc. For one, there is the matter of the border with Northern Ireland and all the political and cultural complications that entails.

The second reason is Ireland's business and economic relationship with the UK, particularly with Northern Ireland. Since the customs and then the security posts came down at the border between the jurisdictions during the 1990s, cross-border business ties have flourished. The border essentially no longer exists.

However, with the terms of the UK's exit far from certain, the prospect of barriers returning is very real. That is cause for concern for businesses on both sides of the border.

"It's a total disaster if we have Brexit because 20 years ago, we had nothing but traffic jams, security, soldiers searching you, customs searching you, guards searching you," said Gerard Crowe, a butcher who has been operating in the border town of Ballyconnell since 1987.

"It took an hour to cross the border most days, just for a one day trip. We'd hate to see that back," he told DW at his shop in the town (population 1,100), which is located about a mile (1.6 kilometers) from the border on the southern side. 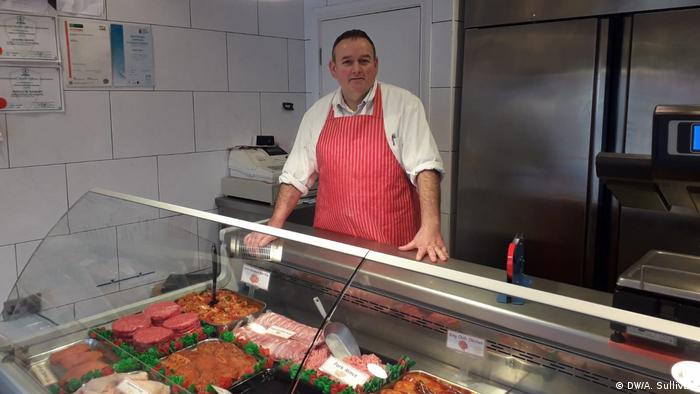 At the moment he buys most of his meat from farmers in Ireland, but he says the majority of the ingredients and supplies he buys, as well as fresh chickens and turkeys, are bought from suppliers in Northern Ireland.

He says he has already cut back by around 40 percent on his accounts in the north due to the uncertainty caused by Brexit and has already noticed a drop-off in customers coming from over the border due to the fall in value of sterling (£).

The agricultural sector has plenty to lose on both sides of the border from any scenario that would see Britain and/or Northern Ireland no longer remain within the European Single Market or the EU Customs Union (EUCU).

Even if one of the many political proposals currently on the table avoids the worst-case scenario, the uncertainty is already doing damage according to Gareth Bannon, a free-range egg producer from the nearby town of Bawnboy.

"The big problem now is just how unknown everything is," he told DW. "We see it in the factory price for sheep at the moment, and beef for that matter. The uncertainty is driving costs up and the price of beef and lamb is on the floor at the minute in Ireland.

"Plus a lot of lamb comes from the north down here. That is going to stop and we don't know what effect that is going to have. The uncertainty is already causing me lots of worry in my business."

The concerns are universal, regardless of the side of the border, or the political persuasion. Tom Elliott is a prominent Unionist politician in Northern Ireland and was the leader of the Ulster Unionist Party from 2010-2012. He also runs a large beef farm close to the town of Ballinamallard, 18 miles north of the border. 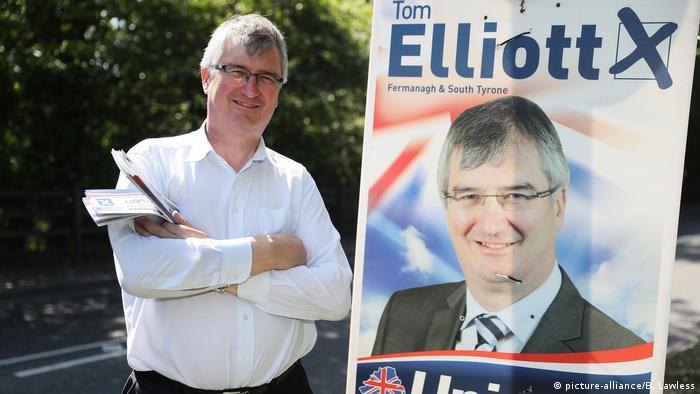 Unionist Tom Elliott understands there are business concerns over Brexit in Northern Ireland, but remains a supporter of the UK leaving the bloc

He says Brexit is currently the biggest topic among the farming community on his side of the border and that there are plenty of concerns. For example, there are fears among sheep producers in Northern Ireland, given the volume of produce they sell across the border. There are also worries over what will replace the EU agricultural subsidies to Northern Irish farmers once the UK leaves.

However, Elliott also represents an alternative view. Although 56 percent of voters in Northern Ireland were against Brexit, there were still 350,000 people in the small region who voted to leave, the vast majority of them Unionist voters. He was one of them, and remains a supporter of Brexit.

He says his support for Brexit has been strengthened since the vote in June 2016 and he also believes the risks posed by Brexit to cross-border trade are being exaggerated. "I don't think you are going to see border customs all around the place, although I think there will be spot checks," he told DW at his political office in Enniskillen.

"But I actually see opportunities for businesses in the ROI (Republic of Ireland) and in Northern Ireland, in that they could have a business in both places. I have been advising companies in both places to set up bases on the other side of the border."

Back in June, the Northern Ireland Statistics and Research Agency and the Irish Department of Finance published figures which showed the level of interconnectedness between the Irish and Northern Irish economies in terms of trade. 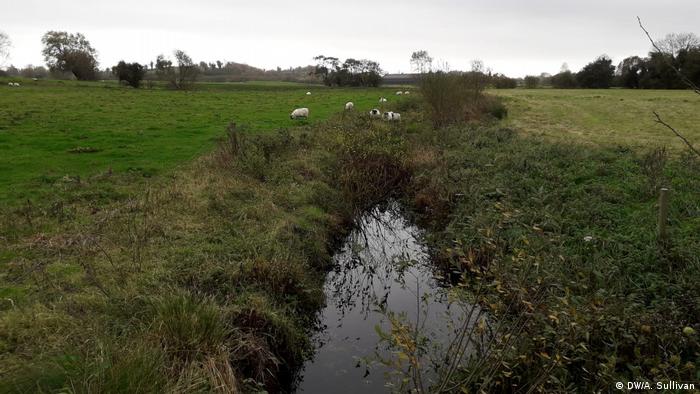 On the right of the stream is the Republic of Ireland while on the left is Northern Ireland. The border is characterized today by its invisibility as much as anything else

In 2016, 30 percent of Northern Irish exports, totaling £2 billion (€2.25 billion, $2.55 billion) were sent to Ireland. Although Unionists consistently point out that Northern Ireland sells more goods to Britain than Ireland, the volume going south and west of the border still accounts for a very significant chunk of the region's output.

Those exports are dominated by the food, agriculture, machinery and transport sectors, with almost three-quarters coming from small businesses.

The dependence of Irish exports on Northern Ireland as a market is much smaller, standing at around 1 percent. However, around 11 percent of Irish exports go to the UK as a whole. Some sectors are particularly reliant on the UK market — for example, around half of all Irish beef goes to the UK.

While many Unionist politicians in Northern Ireland are starkly at odds with their Nationalist counterparts and indeed the Irish government when it comes to Brexit, the Northern Irish business community as a whole appears much more united and more closely aligned with its neighbors over the subject.

All were unanimous in their desire for a deal that preserves the trading status quo. "The vast bulk of people are sitting with their head in their hands," Stephen Kelly from the Manufacturing NI group told the committee. "The overall reaction is worry and concern." 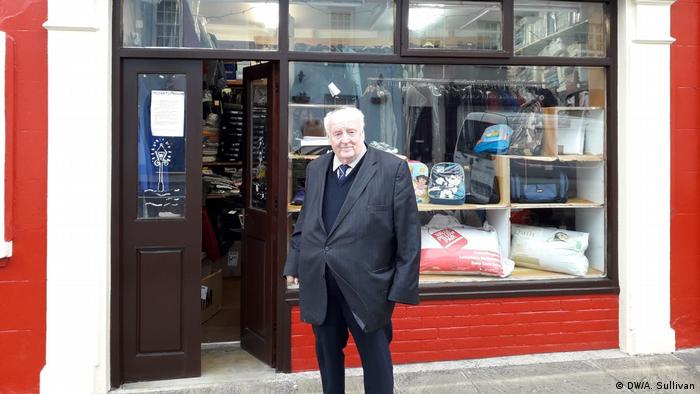 Harold Johnston has run a drapery store in the border town of Blacklion for 55 years. He is relaxed about the implications of Brexit for the region

As ever in the border region though, there is something of a sideways view as well. Harold Johnston has run his family's drapery store for 55 years in the town of Blacklion, literally across the bridge from Northern Ireland.

He says he is not worried about Brexit at all. "I wouldn't get too excited about it,” the 74-year-old told DW at his shop. "A while back, a sheep farmer says to me and another lad, ‘oh what will we do if the border is back?'. The other lad says back, ‘sure you made your money because of the border in the first place — smuggling sheep!'"

"Life will go on regardless."

Brexit along the Irish border