The British prime minister has headed back to Brussels, having survived a vote of confidence from her own party. While she'll be seeking concessions on the Brexit deal, the EU says there'll be no big changes. 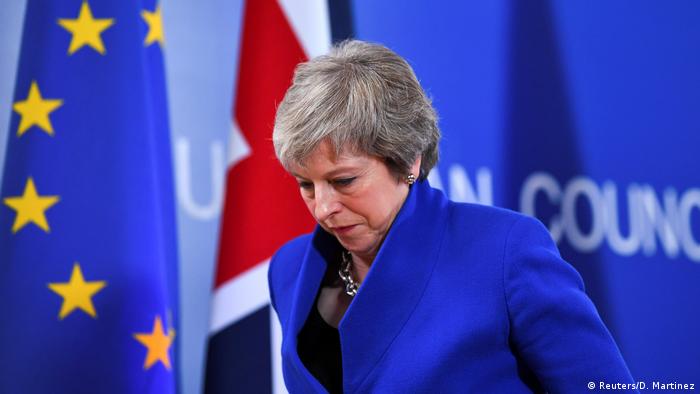 UK Prime Minister Theresa May arrived in Brussels on Thursday, desperately seeking concessions on the Brexit withdrawal agreement at a summit of EU leaders.

May was due to make her case to other leaders after she survived a damaging confidence vote triggered by Conservative lawmakers unhappy with her Brexit plan.

May: 'We need to get this deal over the line'

"We need to get this deal over the line," May told reporters on arrival. The prime minister said she had "heard loud and clear" the concerns of party rebels who tried to unseat her.

"I don't expect an immediate breakthrough," May said, adding that she would tell other leaders of the "legal and political assurances" her party needed.

The prime minister is seeking guarantees about the agreement from the 27 other EU leaders, particularly about the Northern Irish "backstop" clause. Under the deal, the UK would remain part of the EU customs union if the two sides couldn't agree on another way to avoid a "hard border" on the island of Ireland.

However, the bloc has said it is adamant there can be no substantive changes to the legally binding withdrawal deal, while leaving some scope for nonbinding "clarifications" or "assurances."

On Wednesday evening, May survived a no-confidence mutiny triggered by euroskeptic Conservative lawmakers — many of whom are unhappy at the potential prospect of an indefinite backstop — winning by 200 votes to 117. The victory eased the most immediate domestic pressure on the prime minister, though as part of her pitch for survival she pledged to step aside before the next general election.

Irish Prime Minister Leo Varadkar met May ahead of the summit. Head of the European Council Donald Tusk was also due to meet the British prime minister before the event.

'No basis for rewriting agreement'

The German parliament's lower house on Thursday voted against any amendment being made to the withdrawal agreement, as part of a major sitting before Merkel would travel on to Brussels.

Addressing the parliament ahead of the vote, Foreign Minister Heiko Maas said there should be no redrafting. The functioning backstop for Northern Ireland — designed to guarantee no hard border in Ireland — was not up for discussion, he said.

Reaching a Brexit deal with the UK was clearly in Germany's interest, said Maas. However, after months of negotiations to reach a fair compromise, he said, there was "no basis for rewriting this agreement."

As long as the withdrawal agreement was not fully ratified, said Maas, Germany would also continue with its preparations for a hard Brexit.

May also met several European leaders earlier in the week, in a series of stopovers in the Netherlands, Germany and Brussels.

Opinion: Britain, you haven't got time

UK Prime Minister Theresa May has survived a vote of no confidence. And yet with the clock ticking towards a hard Brexit, Britain doesn't seem to be able to tell the time, writes DW's Rob Turner. (12.12.2018)