Opinion: Britain, you haven't got time

UK Prime Minister Theresa May has survived a vote of no confidence. And yet with the clock ticking towards a hard Brexit, Britain doesn't seem to be able to tell the time, writes DW's Rob Turner. 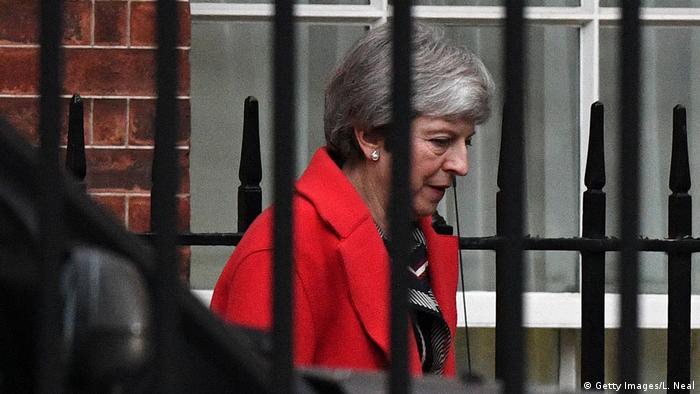 Really? Do you really have time for this? As things stand, you will be crashing out of the European Union without a deal in place in a matter of weeks. Whatever the pro-Brexit hard-liners may say to the contrary, that would be catastrophic.

Unless your MPs pass a law on the divorce deal or suspend Article 50, you will face a hard Brexit.

So why are you wasting such valuable time on internal party politics? Had the prime minister lost a no-confidence vote, finding a new leader could have taken up to six weeks. And you only have 14 weeks to go until March 29.

Then it is D-Day for Brexit.

The choice of words there is not merely coincidental. I was just trying to speak to you in the only language some of you seem to understand.

"The UK changed Prime Minister in May 1940 — in the middle of a monstrously greater national crisis than this. If it has to be done, it has to be done," tweeted Brexiteer MP Bernard Jenkin after the vote was announced.

But these are different times. This is not 1940. This is not World War II. We have been at peace for over 70 years, thanks to carefully constructed European unity.

The potential disaster is of your own making. So why the change now? Why tear yet further at the threadbare fabric of a fragmented country?

Is it possible to kick the can down the street whilst dragging your feet? That's what you seem to have been doing these past two years. And, yes, Theresa May must take plenty of the blame for that.

The unnecessary snap election in 2017 meant precious months that could have been spent working hard on a deal were wasted on campaigning. And ended in an even more fragile government.

She presented an initial draft, the so-called Chequers agreement, that led to a raft of high-profile resignations.

But time finally ran out after taking an age to make progress on a draft deal and then delaying the vote on it.

It seems ironic that it wasn't until her defiant stand on the morning of the confidence vote that May finally struck the right chord.

Changing leaders could have "put our country's future at risk and create uncertainty when we can least afford it," she claimed. And she is right. Parliament goes into Christmas recess in just seven days.

What could a new leader possibly have got done before Brexit? Do the maths. There would be no change to the makeup of Parliament. The government still wouldn't have a majority. There would be the same number of MPs sitting, the majority of whom voted to remain in the EU.

The question of the Irish backstop would not change with a more fervent Brexiteer at the helm. The Good Friday agreement and the EU both insist on there being no hard border between Northern Ireland and the Republic. If there were time to sort that out, it would have been done already.

So what are your realistic options? Another general election? No time. Another referendum on Brexit? No time. A Canada/Norway/Switzerland-style deal with the EU? Do you know how long it took to reach those agreements?

And therein lies the problem. Even with all the time in the world, it couldn't be done. The 48-plus rebels who brought about the leadership challenge are flying in the face of reality if they think a new leader could force a different Brexit deal outcome.

There will be no other outcome. Enough is enough, Europe has said. The next EU summit is on Thursday, and there will be no more time for renegotiation.

The clock is ticking, yet you seem unable to hear. Perhaps it is highly symbolic that the bells of the UK Parliament's famous Big Ben are currently silent. The clock hands were removed in April for maintenance work set to last three years. The repair job on the country could take a lot longer.

UK Prime Minister Theresa May is facing a vote of no-confidence over her Brexit deal. As she attempts to gather support, who can she count on, and who will be trying to get her out? (12.12.2018)

Russia freezes bank accounts of US broadcaster RFE/RL 3h ago

Opinion: Elon Musk a liability for Bitcoin 8h ago