Meghan Markle pregnant as she and Prince Harry arrive in Australia

Kensington Palace has announced that the Duchess of Sussex is expecting a child due in spring 2019. The news comes as she and Prince Harry start a more than two-week Pacific tour in Australia. 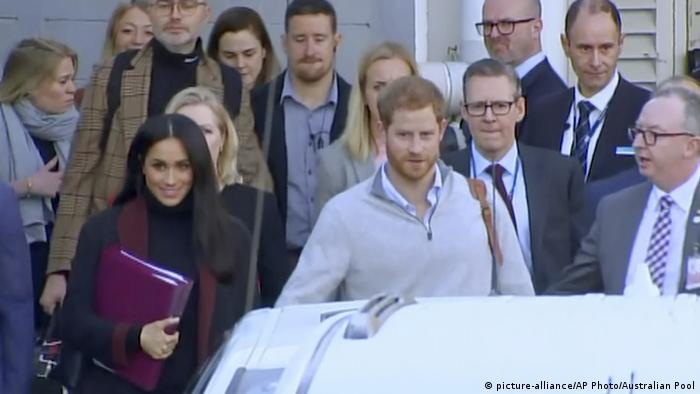 Meghan Markle began her first overseas multicountry royal tour as she and Prince Harry landed in Sydney, Australia on Monday. The newlyweds will embark on a more than two-week tour of the Pacific that also includes Fiji, Tonga and New Zealand, attending some 76 official events during the trip.

Shortly after their arrival in Australia, Kensington Palace announced that the couple are expecting their first child in the spring of 2019.

"Their royal highnesses have appreciated all of the support they have received from people around the world since their wedding in May and are delighted to be able to share this happy news with the public," the palace said in a statement.

The baby will be seventh in line to the British throne.

In Australia, Meghan and Harry will be welcomed on Tuesday by Governor-General Peter Cosgrove and his wife, Lynne. A more light-hearted visit will follow, when the Duke and Duchess of Sussex visit the Taronga Zoo's koalas.

Their itinerary in Sydney also includes sailing in the harbor and visiting the famous Bondi Beach. The couple is set to attend the Invictus Games and also hold a meeting with the new Australian prime minister, Scott Morrison.

The Invictus Games are an international Paralympics-style sport event for military personnel wounded in action, which was founded by Prince Harry.

Additionally, the royal couple will visit the drought-stricken outback town of Dubbo and meet indigenous leaders on Fraser Island, the world's largest sand island, in the northeastern state of Queensland.

A focus on youth development

In a statement about the visit, Kensington Palace said that the couple looked forward to "building an enduring relationship with the people of the region" and that they had asked to meet as many locals from each country as possible.

"Their Royal Highnesses' program will focus on youth leadership, and projects being undertaken by young people to address the social, economic, and environmental challenges of the region," the statement read, highlighting Prince Harry's new role as Commonwealth Youth Ambassador.

All countries in the royal couple's itinerary are members of the British Commonwealth and were former British colonies. Queen Elizabeth II is currently the head of state of Australia, but her role is largely ceremonial.

Meghan and Harry's trip will conclude in New Zealand and will coincide with the commemoration of the 125th anniversary of women's suffrage there. The island nation was the first country to give women the right to vote.

Meghan is expected to speak at the suffrage anniversary celebration in Wellington on October 28.

Confectionary firm Super Dickmann's says the decision to compare Markle to a chocolate-covered marshmallow was "stupid and embarrassing." The firm has been accused of racism for its Facebook post. (22.05.2018)

Prince Louis, son of Britain's Prince William and his wife Kate, has been christened. A small, private ceremony took place at St James's Palace in London. (10.07.2018)

Over 100,000 people gathered in the English town of Windsor for Prince Harry and Meghan Markle’s royal wedding. Fans traveled from all four corners of the globe to be a part of the most uniquely British of celebrations. (19.05.2018)