Confectionary firm Super Dickmann's says the decision to compare Markle to a chocolate-covered marshmallow was "stupid and embarrassing." The firm has been accused of racism for its Facebook post. 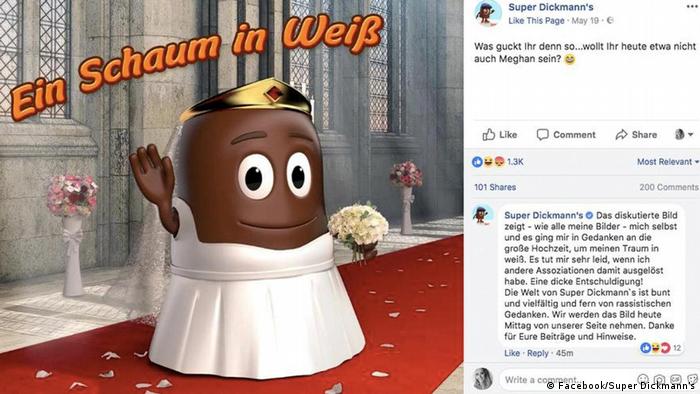 The German company that produces one of the country's well-known chocolate-covered marshmallow sweets has apologized for posting an image of a marshmallow in a bridal dress during the wedding of Britain's Prince Harry and Meghan Markle.

Super Dickmann's shared the image of a smiling "Schokokuss" ("chocolate kiss") bride in a cathedral in a Facebook post on Saturday. The image includes the words, "a foam in white," which refers to the Schokokuss's creamy interior and rhymes with the phrase, "a dream in white."

The company also wrote in the post's caption: "What are you looking at? Wouldn't you also want to be Meghan today?"

Markle, a biracial American, married Prince Harry on Saturday in a wedding ceremony watched by millions of people around the world. Many commentators and media outlets focused on Markle's African-American ethnicity in the run-up to the event.

Dickmann's spokesman Bernd Roessler apologized on Tuesday and said the post, which has since been taken down, was "stupid and embarrassing" and that the firm had not put enough thought into the decision.

In an apology posted on Facebook, the company wrote, "the world of Super Dickmann's is varied and diverse and far removed from racist ideas."

The Schokokuss's association with racism is not new. Although no longer politically correct, older generations of Germans called the snack "Negerkuss" ("Negro kiss").

Read more: What we say when we talk about race