Brazil Squeaks Past Japan | News and current affairs from Germany and around the world | DW | 22.06.2005

Japan nearly pulled off the biggest upset of the tournament by drawing 2-2 with Brazil in Cologne on Wednesday night. Brazil will now face Germany in the semi-finals. 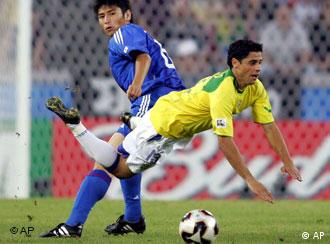 The result left the sides tied on four points in Group B, with Brazil's better goal difference earning them the right to meet Germany in Nuremberg on Saturday.

Robinho and Ronaldinho, wearing the captain's armband, scored Brazil's goals with second half substitute Masashi Oguro getting a second half equalizer after Shunsuke Nakamura's first half effort.

There was a touching scene before kick-off when Ronaldinho, Kaka and Juan came up and hugged Zico, followed by the Brazil team doctor who used to look after the 1980s Brazil superstar in his playing days for Flamengo.

Brazil coach Carlos Alberto Parreira kept his word and made four changes to the side - introducing Marcos in goal and a new backline of Bayer Leverkusen's Juan and Leo to replace Dida, Roque Junior and Gilberto, with Arsenal's Gilberto Silva coming on for Emerson in midfield. Zico kept faith with strikers Keji Tamada and Atsushi Yanagisawa despite the duo misfiring badly against Greece.

"I had two targets in Germany," said Parreira. "The first was to use 20 players in three matches - the second was to qualify for the semi-finals. We knew Japan were going to give us a hard time, they are a very experienced team, they never give up."

In a frenetic start Brazil could have been a goal down in the fourth minute when Akira Kaji's shot slipped under Marcos only for the FC Tokyo defender to be ruled offside. 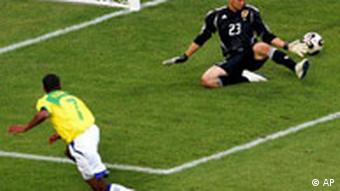 But it was the five time world champions who took the lead in the tenth minute with a fine moment of artistry from Ronaldinho, who escaped Kaji's attentions and ran half the length of the pitch to feed Robinho who had brilliantly slipped his marker, the 21-year-old striker angling his shot from the left past Yoshikatsu Kawaguchi.

Only Kawaguchi's right post prevented Japan going further behind when a Kaka rocket ricocheted off it soon after. The crossbar at the other end was responsible for denying a header from Kaji off Mitsuo Ogasawura's free kick as the Asian champions' pace began to nettle the Brazilians.

Then on 27 minutes they got a deserved equalizer with Marcos only getting his fingertips to Nakamura's shot after an attack which had its origins in a Hidetoshi Nakata-taken free kick. 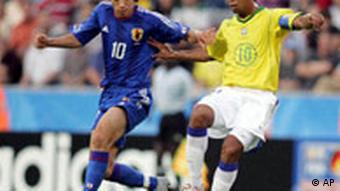 Ronaldinho restored Brazil's supremacy when Robinho crossed from the left for the Barcelona star to slide the ball in from in front of goal in the 32nd minute.

The second half was barely born when Nakamura had his head in his hands after a point-blank effort saved by Marcos - up at the other end only Kawaguchi's bravery kept the ball from going in when the former Portsmouth keeper took the full force of Juan's shot in his face.

Adriano, having an off day, made way for Julio Baptista with Kaka replaced by Baptista's Seville teammate Renato on the hour mark and shortly after there was another new face on the pitch belonging to the Brazilian fan who breached the tight security cordon.

He ran up to Ronaldinho before jumping into the Japan goal's netting, five security guards in hot pursuit in the third incident of this nature at the 2005 Confed Cup which will give organizers cause for concern ahead of next year's World Cup.

Japan's Shunsuke Nakamura, left, hits a free kick over the Brazilian wall during the Confederations Cup Group B soccer match between Brazil and Japan in Cologne, Germany Wednesday June 22, 2005. The free kick hit a post and from the rebound Masashi Oguro scored Japan's equalizer.

Japan had the last word when Oguro repeated his feat against Greece and scored the late leveller after a beautiful free kick over the wall by Nakamura hit the post. All Oguro had to do was sink the rebound.

"I'm pleased with my freekick but disappointed we haven't
qualified," said Nakamura, who was named man-of-the-match.

Soccer gods Brazil nearly suffered a massive upset when in the match's waning seconds, Japan nearly scored again. Only a save by keeper Marcos kept the world champions from going home early.

Mexico will face Argentina in the semi-finals of the Confederations Cup after a 0-0 draw against Greece in the other Group B match on Wednesday. The scoreless draw, the first of the tournament so far, helps Mexico stretch their unbeaten run to 21 games.

Mexico won the competition in their homeland back in 1999 and if they can continue their unbeaten run for two more games the trophy will be theirs again.

Germany tied 2-2 with Argentina on Tuesday night, making the hosts the winner of Confed Cup group A. The result puts both teams through to the next round. (June 21, 2005)

Confederations Cup host Germany isn't resting on its laurels after its 2-2 draw against soccer heavyweight Argentina on Tuesday. But its determined performance seems to have finally silenced the sceptics. (June 22, 2005)

The official homepage of the 2005 FIFA Confederations Cup in Germany.