Boris Nemtsov: The man who dared to criticize Vladimir Putin | Europe | News and current affairs from around the continent | DW | 27.02.2020 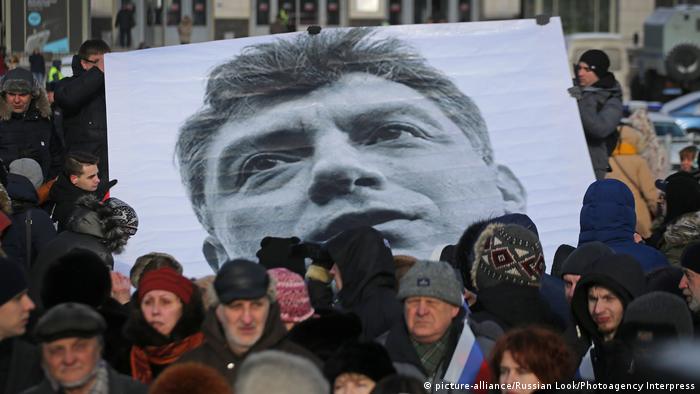 Late on February 27, 2015, Boris Nemtsov was walking across a bridge in Moscow after dinner with his Ukrainian girlfriend when an unknown assailant shot him several times in the back. Nemtsov died almost instantly, but his girlfriend escaped unhurt.

Russia was shocked by this high-profile assassination of a well-known politician in such a symbolic location. At the time, Nemtsov was one of the country's most prominent opposition figures and one of President Vladimir Putin's most vocal critics.

Political star of the 1990s

Nemtsov's political career underwent many transformations. He made a name for himself in the 1990s as one of the "young reformers" without a communist background. In 1991, President Boris Yeltsin appointed Nemtsov, then 32, governor of the Nizhny Novgorod region, making him the youngest governor in post-Soviet Russia.

In a region that had been isolated because of its military production sites, Nemtsov introduced liberal reforms that were later considered exemplary by the central government. At 36, he became deputy prime minister, and many believed he would succeed Yeltsin as president.

'A political murder for which Putin was responsible'

But instead, Vladimir Putin became president in 2000. At first, Nemtsov sought to cooperate with Putin, but soon he and his party, the Union of Right Forces, entered the opposition. In 2004, he supported Ukraine's Orange Revolution and became adviser to the liberal Ukrainian President Viktor Yushchenko, much to the anger of the Russian leadership who had backed Putin protege Viktor Yanukovych — who would eventually take power in 2010. Nemtsov was also a vociferous critic of the Russian military intervention in Ukraine and the 2014 annexation of the Crimean Peninsula.

Who gave the orders to kill?

The investigation into Nemtsov's murder quickly led to the semi-autonomous Russian republic of Chechnya, with five Chechen men being found guilty of carrying out the contract killing in exchange for 15 million rubles (some €210,000). Zaur Dadaev, 35, a Chechen officer, admitted he had fired the shots and was sentenced to 20 years in prison in 2017. His four accomplices were sentenced to between 11 years and 19 years in prison.

The identity of the person who gave the orders to kill Nemtsov, and the motive, remains unknown, but there is speculation it could be somebody high up in the Chechen leadership. Nemtsov's daughter Zhanna Nemtsova, who worked for DW from 2015 to January 2020, has criticized the investigation, saying it was "not a full-fledged investigation, but an imitation." The Organization for Security and Cooperation in Europe and the Council of Europe have called on Russian authorities to conduct a new and transparent investigation, but authorities have rebuffed the request.

Read more: Opinion: Getting to know my own father

Calls to erect a monument to Nemtsov, or rename the bridge on which he was shot in his memory, have been rejected by the Kremlin. Flowers which are laid almost every day in the spot where he was killed are regularly removed, and there are frequent violent altercations between police and activists. After plenty of wrangling, a private initiative received permission to install commemorative plaques on the buildings in which he lived. 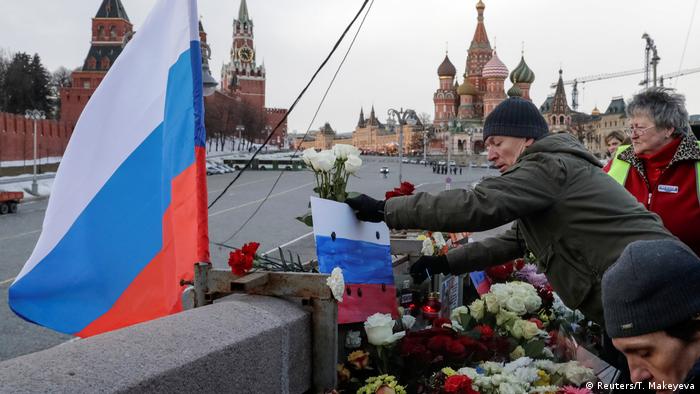 To this day, people continue to lay flowers at the site of Nemtsov's assassination

Various cities around the world, including Washington, Vilnius and Kyiv, have already renamed squares to commemorate Nemtsov.

The latest to join this group was Prague, which renamed a square — home to the Russian Embassy — in his memory. Zhanna Nemtsova has welcomed the decision, telling DW that the international initiative had had an "impact on the Russian authorities, particularly the municipal ones."

"While political persecution is on the rise in Russia, the authorities are beginning to understand that you can't just physically annihilate an opposition leader," she said. "They did not expect such a wave of discontent and outrage to be unleashed."

On February 29, a memorial march for Boris Nemtsov will take place in Moscow. Authorities in St. Petersburg have rejected a request for a similar commemoration.

Her father was Russian opposition politician Boris Nemtsov, who was assassinated in February 2015. Now Zhanna Nemtsova, who works for DW, launches a book in Germany, as she wants to "wake up Russia." (12.02.2016)