It is often said you can take a person out of a place, but not vice versa. From condensed milk to vodka and pickled tomatoes to melancholy music, Russian Berlin is a magical case in point.

Time was, the closest I'd ever been to Russia was through the words of Pasternak, Solzhenitsyn and Dostoyevsky. But that was before I made Berlin my home. In the early days of my being here, back when the Wall, though five years gone, still visibly divided the city, I moved into a flat in the former East.

It was on a cobbled street across from a newsstand that sold Russian papers, and above a cafe whose modest menu gave pride of place to the meaty flavors of solyanka and borscht. I ate them enthusiastically and became accustomed, whenever questioned about where I came from, to hearing people tell me they spoke no English because they had Russian at school.

-Berlin and beyond: Shalom Berlin

-Berlin and beyond: Keep working, women

-Berlin and beyond: Virgin voter

The cafe, cobbles and the newsstand have all been removed or replaced by the ever-shifting sands of time, but even now, those who grew up in the East sometimes reference their language classes as a means of giving context to their heritage. Which is not to say they unanimously embraced them. Far from it.

The story of Russian Berlin is complex, and like so much in this city, a tale of two halves. In the early 1920s, more than 300,000 refugees fleeing the Revolution at home arrived here. Of those who stayed for any length of time, most settled in the western district of Charlottenburg, thereby lending it the local nickname Charlottengrad. 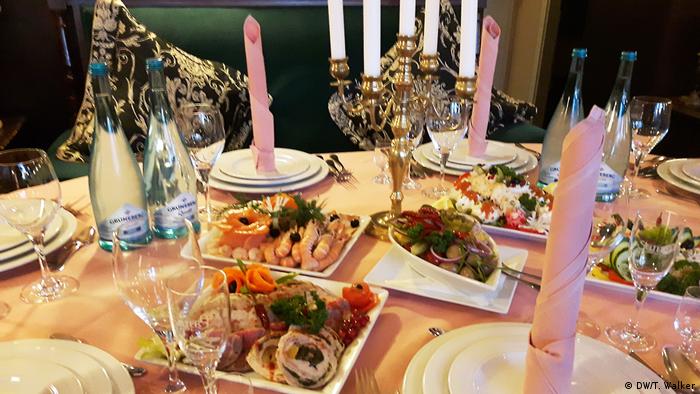 A century down the line, Berlin's Russian community numbers around 22,000. Many live in that same pocket of the city where their forbears planted roots and where the trappings of what they brought with them endure in the form of specialist shops, entertainment venues, schools, an Orthodox church, synagogues and, of course, bars and restaurants.

The oldest is the Samowar, which with its traditional music, samovars, matryoshkas and tables elaborately laid out for long evenings of talking, eating and drinking, is a slice of home from home.

-Berlin and beyond: Into the woods

-Berlin and beyond: Hunting for hipsters

-Berlin and beyond: Auf Wiedersehen Britain

Second half of the story

Tradition is a word that comes up over and again when speaking with Russians. And over the years, many have told me they live alongside rather than with Berliners. My probing whys have elicited a range of responses, from casual shrugs to assertions that minority groups stick together, to claims of irreconcilable personality and cultural differences. If condensed milk is your thing...

But I don't buy that. Sandwiched between high-rise blocks of flats on a main traffic artery in the former east is a supermarket that's testament to the second half of Berlin's Russian tale. Within easy reach of the city's other significant community -  most members of which settled here after the Cold War - its shelves are stocked with thousands of products imported from the motherland while its aisles are alive with shoppers of both nationalities. A penchant for vodka is well-served here in Berlin

At the snack bar outside, I got chatting to a man who arrived in Berlin about a decade ago. He studied music here and married a German woman with whom he has bilingual children. As we stood under the chilly grey skies, eating pickled onion and drinking Kwas, an alcohol-free rye drink, talking about the Russian ability to embrace melancholy, to sing - as he put it - a sad song with joy, I was acutely aware of still never having made it to his home turf. But equally aware of how close I can get right here in Berlin.