Fresh from becoming Bayern’s youngest Champions League scorer, Jamal Musiala has made a big decision about his future. The teenager will play his international football for Germany, rather than England. 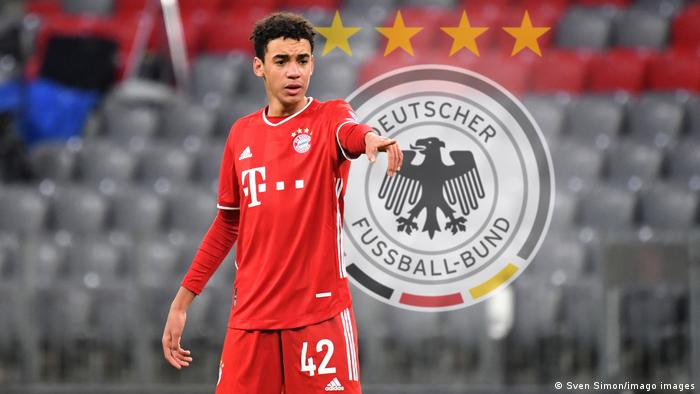 Jamal Musiala has burst on to the Bundelsiga scene this season.

Though Jamal Musiala says that England "feels like home for me," the 17-year-old will play his international football for the country of his birth, Germany.

"In the end, I just listened to the feeling that over a long period of time kept telling me that it was the right decision to play for Germany, the land I was born in. Still, it wasn’t an easy decision for me," he told "The Athletic."

Musiala primarily represented England in youth internationals after moving to the country aged seven. But he was born in Stuttgart to a German mother and British-Nigerian father so had a big choice to make.

It had been thought that the teenager, who will sign professional terms with Bayern on his 18th birthday later this week, would continue to play for England but Germany head coach Joachim Löw and his Bayern teammates appear to have been a factor in a difficult decision.

"I had a very good and honest conversation with Joachim Löw. We met personally in Munich. At this meeting, Mr. Löw showed me a very clear path for me in the national team," he told German broadcaster ARD. "I was very impressed when I read that Serge Gnabry, Manuel Neuer and Joshua Kimmich publicly stood up for me and spoke so positively about me. I have a huge amount of respect for their achievements at FC Bayern and the German national team and for them as personalities."

Musiala said he had felt welcome in England from the start, despite arriving without speaking the language and expressed his gratitude to the English FA and Chelsea, where he started as a youth player.

"It is difficult to find words for what England means for me because I have so many memories connected to very positive emotions," he said.

Musiala returned to Germany when he signed for Bayern two years ago, and said his feelings for both countries remain.

After a two minute debut cameo last season, Musiala has become a regular for Bayern this term and is clearly trusted by former Germany assistant coach Hansi Flick. His goal in the win over Lazio on Tuesday was his fourth of the season in 27 appearances, many of which have been from the bench.

An attacking midfielder with vision, grace and composure, Musiala will now form part of a strong Bayern backbone eligible for Germany along with Neuer, Niklas Süle, Leon Goretzka, Kimmich, Gnabry and Leroy Sane.

Why has Leroy Sané struggled since joining Bayern?

Why has Leroy Sané struggled at Bayern in his first months?

Eintracht Frankfurt pulled off a season-defining victory against Bayern Munich on Saturday. The result strengthens Frankfurt's claim for a Champions League place and weakens Bayern Munich's place at the top of the table.