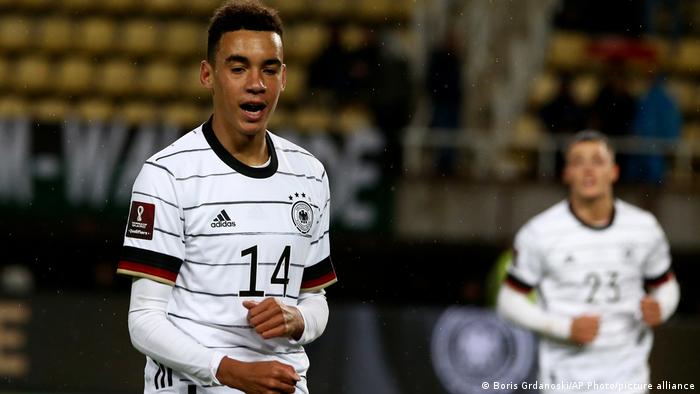 One of the first text messages Jamal Musiala received after he became the youngest goal scorer in Bayern Munich's history last season was from his old school teacher. "Congratulations Jamal, the first of hundreds to come!" the text read. Musiala swiftly replied with a thumbs up emoji and the words "Thanks, sir!"

The chances look good, and the records keep on coming. In June 2020, Musiala became Bayern's youngest-ever player in the Bundesliga, aged just 17 years and 115 days. Ninety days later, he became their youngest-ever scorer.

At Euro 2020 earlier this year, he became Germany's youngest-ever player at a major tournament, coming on as an 82nd-minute substitute for Robin Gosens before helping to set up Leon Goretzka's decisive equalizer. Another record tumbled on Monday night, a goal against North Macedonia making him the youngest man to score for Germany in a competitive game.

Made in England, polished in Germany

Born in Stuttgart in February 2003, Musiala spent the first seven years of his life in Fulda, a small city near Frankfurt before moving to London with his German mother and Nigerian father. He represented England from under-15 to under-21 level but ultimately decided in February 2021 to represent Germany — much to the surprise of his former coach Martin.

"He grew up as a footballer at Chelsea, and there he played with many other English players, so he always felt more comfortable playing for England," he said. "When he played for Germany, he felt like an outsider purely because he wasn't on that circuit and he didn't know any of the boys."

He's quickly settled into life with the Nationalmannschaft though, with experienced fullback Gosens telling a press conference earlier this year:

"When I was 18, I was still hanging out with my friends and had nothing to do with professional football. Jamal is a really nice guy, very open and willing to learn. He is very down to earth and, if things carry on like this, he'll have a great career." 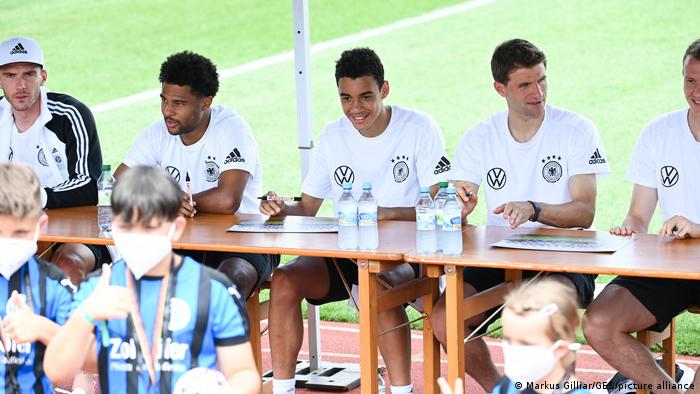 Musiala isn't one to get carried away, though. He's a quiet boy whose grit and determination to make it at the top level have been obvious for a long time — but his raw ability as a goalscorer is what made him stand out at youth level.

"I was fortunate enough to coach Jamal for the three years he was at Whitgift," recalls Martin, a former player and coach for Premier League club Crystal Palace. "When he first arrived, he was a small and slight lad, and someone who didn't strike you as having great amounts of confidence. But as soon as you put him on a football pitch he comes alive."

That was certainly the case in his first full season for Bayern Munich, in which he scored six goals in 27 appearances, plus his first Champions League goal in a 4-1 win away at Lazio. One day later, he officially declared for Germany. His progress in Bavaria has continued under Julian Nagelsmann, with Musiala registering two goals and two assists from 188 league minutes over six appearances this term.

"He is an outstanding footballer and that was very obvious from an early age," Martin said. "He was predominantly a No. 9 and a prolific goalscorer. He would score 50+ goals for us a season, and he wasn't far off that mark at Chelsea.

"Technically outstanding, very skillful, and a player who can score all types of goals, inside and outside the box. And he's a great dribbler and likes to take players on. He later became a No.10 and has become as much of a creator as a goalscorer. 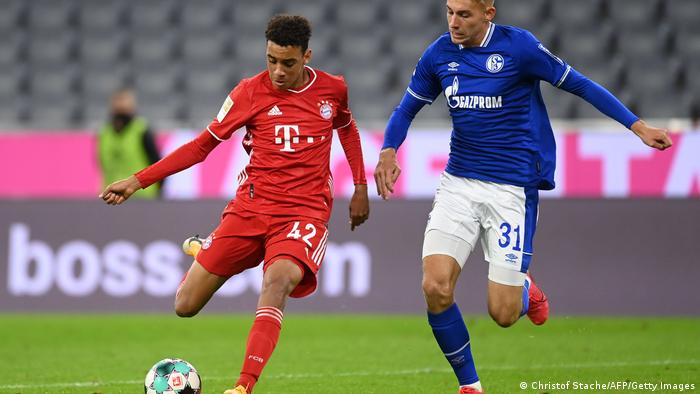 Musiala scored his first goal for Bayern at the tender age of 17 years, 6 months and 23 days against Schalke

Admirers all over Europe

Musiala has many admirers. His former Bayern boss is one, with Hansi Flick delighted to have him in the German set up. "He is already very calm in front of goal for his age," the coach said after Musiala set his latest recrod.

From Andrew Martin to Julian Nagelsmann to Hansi Flick, it appears Musiala is in safe hands.

England vs. Germany: Is it the greatest rivalry in sports?

Euro 2020: What do the Germans really think of England?

Germany face England in the last-16 on Tuesday, a fixture considered one of the greatest rivalries in the game — at least in England. But how do the Germans see it? Three German football experts tell DW what they think.