Germany have qualified for the 2022 World Cup in Qatar following a big win against North Macedonia in Skopje, with Timo Werner scoring twice. A lot has changed since Germany last faced the same opponents. 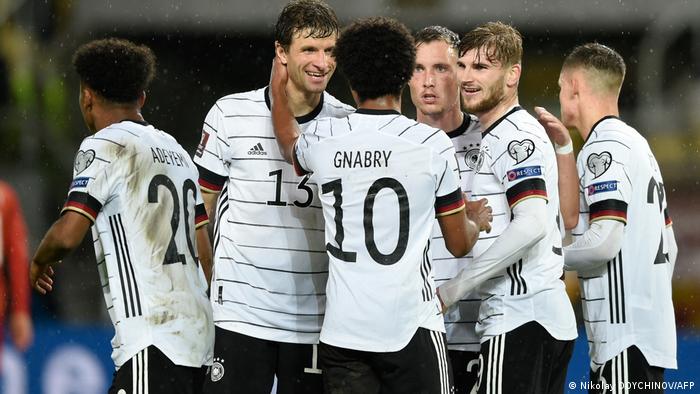 Germany have qualified for the World Cup more than a year before it starts.

What a difference seven months makes.

In a soggy Skopje, Germany got their revenge against North Macedonia for that shocking upset in March. In doing so, Hansi Flick's Germany revealed just how much has changed since the two teams last met.

Once again, Germany played more vertical passes, took more risks across the field, and worked harder to win the ball back the moment it was lost. It is clear how this team wants to win games.

"I have to compliment the team's attitude," Flick told RTL afterwards.

Leon Goretzka admitted afterwards Germany had to tire North Macedonia out before they could make their breakthrough, and so it proved as Germany's patience was tested.

Starting debutant David Raum's impressive deliveries from the left weren't capitalized on, Timo Werner hit the post and Joshua Kimmich did his best to overcome having a laser pointed in his face.

Germany have Serge Gnabry though. The Bayern attacker, who has 20 goals in 30 games for his country, sparked Germany into life with a perfectly weighted pass that split North Macedonia's defense, allowing Thomas Müller to draw the goalkeeper and set up Kai Havertz for an easy finish.

"The final ball was right in the second half," Kai Havertz told RTL afterwards. "The last few games have shown the quality in this team."

In just five games, Flick has changed the discourse around this team as well as the belief within it.

Just last week, Gnabry talked about winning the World Cup being a German tradition while captain Manuel Neuer doubled down on his desire to win it all. "We want to be world champions. That is the aim of this team," Neuer told Bild.

Perhaps more than anyone though, Timo Werner has benefited from Flick's faith. Another poor performance in Hamburg led to questions about whether Werner could really lead Germany's line. Flick delivered a public display of support and confidence and Werner responded, lashing in a second with the frustration of a striker who has been short on luck. His third, a beautifully curled effort from just inside the corner of the box, had the markings of a player free of the weight on their shoulders.

"I think I've said it a lot but if a coach likes a player and plays them then it helps and gives confidence. I need that and he [Flick] gives it to me," Werner said afterwards.

October's results may appear little more than hard-earned or expected victories for Germany but the performances promise much more than was being squeezed out in the late Joachim Löw era. Jamal Musiala coming off the bench to add a fourth feels like something that would never have been possible seven months ago, as does conceding just one goal in five games.

With qualification achieved, now Flick will begin to fine tune. The final two games in November, the unconfirmed friendlies planned for March, and the new Nations League tournament in June are all opportunities for Germany to get better at delivering Flick's gameplan.

"We have to keep growing as a team," Goretzka said. "We don't have much time, but I don't think there's many better than Hansi [Flick] to get us there but we have to use each training session and each game."

The World Cup might be a year away, but already it is clear that Germany will arrive at the tournament as serious contenders rather than hopeful challengers. What a difference seven months has made.

Re-live Germany's win over North Macedonia in our live blog on page two:

Welcome to live buildup of Germany’s World Cup qualifier against North Macedonia. The four-time world champions will qualify for the World Cup with victory against the team that shocked them earlier this year.