In Joachim Löw's last-ever qualifier, his Germany side fell to defeat by North Macedonia. With the Euros less than three months away it's an alarming defeat for a side that had appeared to have rediscovered its mojo. 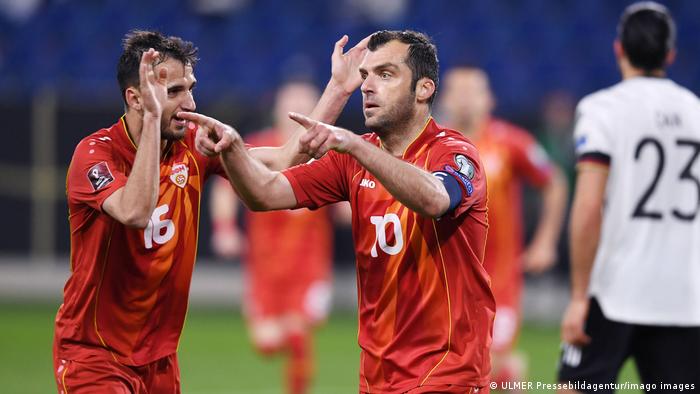 During a triple header of World Cup qualifiers, Germany saved their worst for last.

Having dispatched Iceland and ground out a win against Romania, Germany suffered defeat by North Macedonia in Joachim Löw's last qualifier as head coach. This was a mad March, but not in the way Germany would have imagined.

The lethargy and hesitation on show against Romania remained for Germany's second game in Duisburg this week. Having dominated early, they suffered late as a familiar and inevitable in-game dip turned into a halftime and full-time deficit. The evergreen Goran Pandev and the elusive Elif Elmas showed Germany that sometimes it pays to not over think it.

Löw's decision to change just his keeper and left back from the last game suggests he already knows who is starting eleven will be in the summer. The team did not transmit that clarity, though. Wasteful and ponderous, this was more Germany post-Russia than Löw's famous farewell tour it looked like being last week. 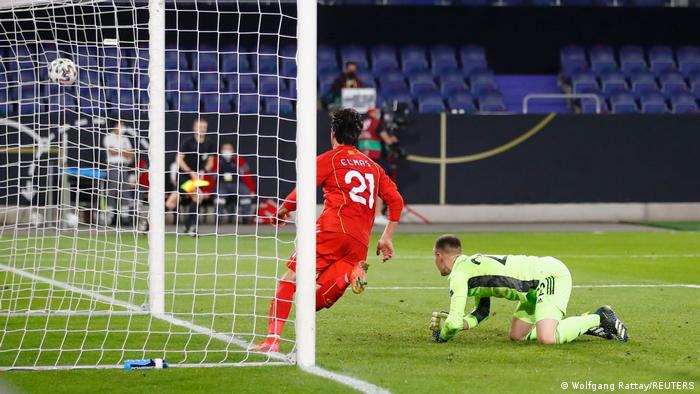 Eljif Elmas scored the winner for North Macedonia, the biggest win in their history.

While the continued support for human rights — a move soured only by the DFB’s (German FA) decision to seize upon the first show of support for marketing gain — shows a personality emerging out of this team, their on-field performances are still far too unpredictable. In the space of a week, Germany have gone from wonderful to wilful to woeful. Three months away from a major tournament, that is the last thing any team wants or needs.

And that is Löw's biggest issue. Most coaches would be happy to just get three points expected of them in qualifiers. Not only could his side not do that, but for a man leaving in four months the performances matter just as much now.

Initially, the news of Löw's departure loosened something in him and the team. The weight of development or future cycles of this team are no longer on his shoulders. That pep, enthusiasm and  has continued on the sidelines — as his team came in from warm-ups before the game against North Macedonia, he clapped his hands with giddy excitement — but his newfound bounce has not been matched by his team.

"We couldn't find a way to break down a deep-lying North Macedonia team," Löw said afterwards. "Our organization inside the box wasn't good."

Amin Younes added the impetus off the bench that ultimately led to Germany's equalizer but it was nothing more than a flash of brilliance. North Macedonia deserved their winner as much as they had deserved to take the lead. The defeat was damning enough for Löw, but it was the manner that will cause more concern. Germany's loss was their first in a home World Cup qualifier since 2001.

Germany wobbled their way through this game. They escaped conceding a penalty after a deliberate handball by Emre Can. They fluffed a glorious chance to win the game when Timo Werner got his feet mixed up, a miss that Löw said was a "turning point for the team". Germany looked and played tired, and in the current context that is understandable. While this is perhaps not an unsurprisingly way to the end week for Löw and Germany, it is painful one.

Löw announces his squad for the Euros on May 18. This week has shown he already knows his starting eleven, but it has also shown that a week cannot change the truth about a team. And for Germany, that truth is this team has not recovered from Russia and Spain as much as it thinks it has.

86' GOAL! Germany 1-2 North Macedonia — North Macedonia have scored again! Eljif Elmas scores what could prove to be a famous winner. Germany have been second best tonight and can have no complaints.

76' North Madeonia should have a penalty. The ball strikes the arm of Emre Can at the near post nd, despite North Macedonia's vehement shouts for a spot-kick, nothing is given. No VAR in World Cup qualifiers.

63' GOAL! Germany 1-1 North Macedonia — Ilkay Gündogan makes no mistake from the spot and Germany are level.

56' A double swap for Germany: Younes and Werner on, Gosens and Havertz off.

SECOND HALF — We go again. Can Germany avoid humiliation?

HALF TIME - Germany 0-1 North Macedonia: That half had a late sting in the tail and it has left Germany with a challenge in the second half. The visitors have been quite happy to sit back and defend in numbers in Duisburg, so expect that to be a factor after the break.

45'+2 GOAL! Germany 0-1 North Macedonia — Pandev scores! Well, well, well, what a story we could have here. Enis Bardhi finds Goran Pandev and the veteran forward tucks the ball in from close range. His 37th international goal and that's got to be one of the biggest.

41' Ter Stegen forced into his first save of the night, flicking away a ball into the box that threatened to sneak in.

37' Antonio Rüdiger receives an extremely harsh yellow card. He simply attempts a spectacular overhead kick but misses the ball and catches Adena. Obviously an accident, but the card-happy Russian referee Sergei Karasev is quick to brandish the yellow.

26' Another sight at goal for Germany and again it's Gnabry — but his low shot is saved well by the left leg of North Macedonia goalkeeper Stole Dimitrievski. A few moments later Gnabry gets a third opportunity, but he skies his shot from close range.

20' North Macedonia have survived that early Germany storm and are looking fairly comfortable now. Germany have just lost some of that early steam.

9' Off the bar! Goretzka slams the ball against the frame of the goal as Germany co tinue to knock at the door. Havertz laid it off for the Bayern midfielder, whose shot has left the bar still shaking. North Macedonia clinging on already. 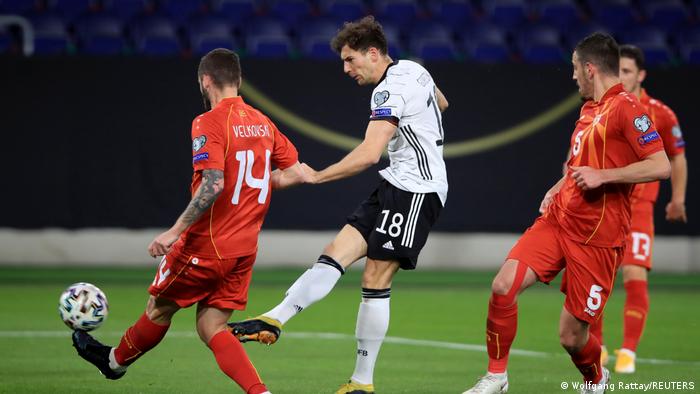 Goretzka hammers an early shot against the bar.

5' First sight at goal for Germany as Ginter floats a delightful ball over the top for Gnabry, who can't quite make contact with the ball as it dropped over his right shoulder. A difficult chance, in all honesty. Moments later, Darko Velkovski, North Macedonia's center back, picks up an early yellow card.

We're underway in Duisburg as the team makes another stand against Human Rights abuses in Qatar (without actually mentioning Qatar).

Manuel Neuer steps aside for a pre-agreed change of goalkeeper. Barcelona's Marc-andre ter Stegen — the best understudy goalkeeper in the world — gets the nod. Elsewhere, Robin Gosens of Atalanta gets his chance at left-back. Otherwise, it's as-you-were for Germany.

Kroos hits out at Qatar

As countries and players continue to speak out about the awarding of the 2022 World Cup to Qatar, Germany's Toni Kroos has added his criticism to the decision to award the tournament to Qatar — but stopped short of calling to boycott it.

Speaking on his podcast, Einfach mal Luppen, which he records weekly with his brother, Union Berlin's Felix Kroos, the injured Real Madrid midfielder said: "I think it's wrong that this tournament was awarded to Qatar.

You can read more of Kroos's comments here.

Joachim Löw's side needed a point to win their Nations League group. Instead they suffered their biggest defeat since 1931 as Spain dispatched their visitors in a flurry of minutes in both halves.