Austrian Chancellor Sebastian Kurz and Bavaria's premier, Markus Söder, supported closing the EU's "external border." Söder said a failure to find a solution to migration would be "a problem for democracy" in Europe. 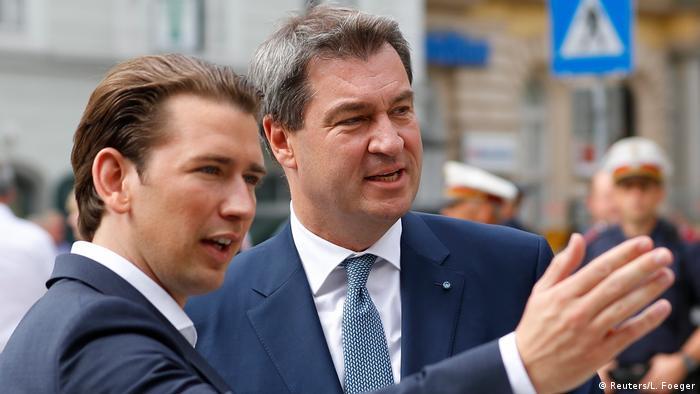 Ahead of Sunday's European mini-summit on immigration, Austrian Chancellor Sebastian Kurz met with neighboring Bavarian Premier Markus Söder on Wednesday to discuss cooperation on the issue.

The meeting comes at a time of high tension in Germany between Angela Merkel and her Bavarian sister party, the Christian Social Union (CSU), over immigration policy. Interior Minister and head of the CSU, Horst Seehofer, has given her two weeks to find a solution to illegal migration at the EU level before he orders border police to start turning away refugees.

Söder, of the CSU, which currently governs Bavaria, found support in like-minded Kurz, whose center-right party is currently in a coalition government with the far-right party FPÖ in Austria.

"Bavaria and Austria have a joint conviction and a joint stance," Söder said ahead of talks with Kurz, in the city of Linz, Austria.

What was said at the press conference:

The Austrian position: Kurz has recently proposed a so-called "axis of the willing" with Germany and Italy, hoping that it will push for restrictive border policies at the national and the EU level. Austria is set to take over the European Union's rotating presidency, and Kurz looks forward to Sunday's mini-summit, to address an issue whose solution he has said is "overdue."

Unison with Bavaria: Kurz and Söder are both hardliners on immigration issues, but at the meeting they said they saw each other as a "bridge builders" within EU politics. They said they were committed to finally resolving the migration issue and prevent a repeat of the events of 2015.

Kurz told reporters that he believed that European politics had reached the point where "most countries agree that open external borders are the wrong way."

The Austrian chancellor says he wants a continental solution, warning that if Europe does not agree on a common response to immigration, the specter of a "catastrophe" similar to the events of 2015 will occur.

A Bavarian official known as a "tough dog" for taking a harder line against asylum-seekers is the new head of Germany's migration office. The agency's former chief was fired on Friday over an asylum application scandal. (17.06.2018)

German Chancellor Angela Merkel and her French counterpart have vowed to introduce a single eurozone budget and emergency funding as part of far-reaching reforms. They also agreed to reduce the refugee flow to Europe. (19.06.2018)