German Chancellor Angela Merkel and her French counterpart have vowed to introduce a single eurozone budget and emergency funding as part of far-reaching reforms. They also agreed to reduce the refugee flow to Europe. 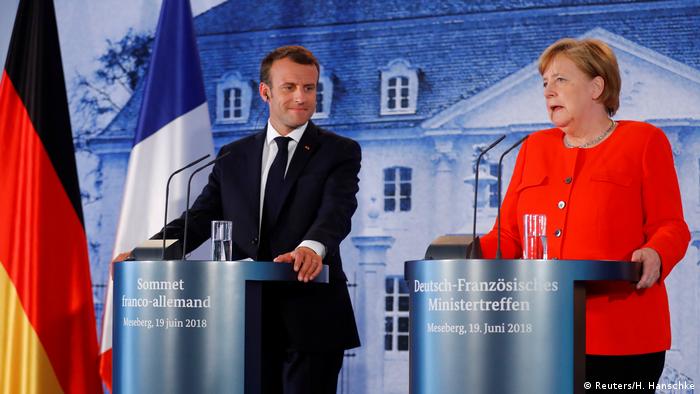 Germany and France have agreed to "open a new chapter" in European Union relations, after Chancellor Angela Merkel and French President Emmanuel Macron met to finalize plans for sweeping reforms of the 19-member eurozone, including a new parallel budget.

Tuesday's talks at Meseberg castle outside Berlin have a lot riding on them: Merkel's political survival rests on her finding a European solution to prevent another influx of migrants to Germany, while both leaders have staked their reputation on further reworking the eurozone.

What the two leaders agreed

Budget details to be hammered out

"We are working to make sure that the eurozone budget will be used to strengthen investment, also with the aim of strengthening convergence within the eurozone," Merkel said.

Macron added that the budget will be a "real budget with annual revenues and spending."

Regarding migration, Merkel said it was vital that EU states are "not just working for ourselves but in the spirit of Europe."

In reference to wider reforms to EU foreign policy and defense, Merkel said: "We want Europe to find its place in a multilateral world." The German chancellor said the EU needed to react more speedily to world events and "we won't always wait for absolute consensus."

EU needs Macron vision, but not his 'super-state'

Moment of truth: Tuesday's talks were seen as vital for ensuring the European project moves ahead after a decade of crisis, division and instability. France said ahead of the talks that if Merkel and Macron didn't agree on strengthening the eurozone and dealing with migration, the bloc was likely to return to turbulent times.

Macron gets his way: Self-proclaimed europhile, Macron, who has vowed to reform the bloc, had previously been pushing for the creation of a parallel budget for the eurozone. But he may not achieve the several hundred billion euro allocation that he had hoped for.

Much-needed reforms: Although Europe's economy has picked up steam, and there is no immediate sign of financial stress, many analysts maintain that reforms are needed to protect the single currency.

The reforms will be discussed at a summit of EU leaders on June 28-29.

In his first speech before the European Parliament, France's Emmanuel Macron called for energetic changes and open debate with EU citizens. Macron also decried the bickering among EU politicians as a "fool's game." (17.04.2018)

French President Emmanuel Macron is addressing the European Parliament about his plans for reforms of the EU. But it remains to be seen whether it can convince the French and other Europeans of its pro-European ideas. (17.04.2018)