In his first speech before the European Parliament, France's Emmanuel Macron called for energetic changes and open debate with EU citizens. Macron also decried the bickering among EU politicians as a "fool's game."

France's president, Emmanuel Macron, urged changes to address concerns and fears of EU citizens in a speech aimed at boosting unity amid a string of crises.

Speaking to EU lawmakers in Strasbourg on Tuesday, he urged the deputies to create a "proper debate on convictions and proposals" and make "EU democracy come alive" as the bloc starts preparations for the May 2019 elections for the European Parliament. The vote is the first EU-wide election since before the UK voted to leave the union.

People "have not given up on Europe," Macron said in an emotionally charged address on Tuesday.

Macron called for a debate on migration, a road map to eurozone regulation, reforming the banking system, and "EU-wide sovereignty" to complement the sovereignty of individual member states.

"We need to build this EU-wide sovereignty to protect our citizens in terms of internal and external defense and security," he said.

'Wost possible mistake' to give up on democracy 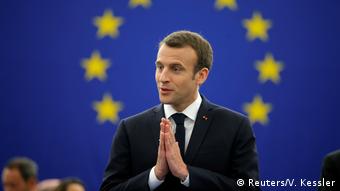 Macron's described the EU democracy and unity as a "treasure"

The 40-year-old Macron also pointed at the rise of populism inside the EU, reflected in the outcome of recent elections in Italy and Hungary.

The rapid changes in the today's world require politicians to change their ways, but this must not mean a rejection of democracy, he added.

"Indeed, in these difficult times, the European democracy is our best chance," Macron said. "The worst possible mistake would be to give up on our model and our identity."

US moving away from EU values

"To carry on in this manner is a fool's game, which may be more comfortable for us to engage in, but nothing will be resolved in this way," Macron said.

Macron also decried the growing gap between the EU and the values propagated by the current US administration.

"We share so much with this country, but this country is rejecting multilateralism, free trade and climate change," he said.

"The true France is back," Juncker said on Tuesday.

At the same time, he warned that the EU was an "ensemble" and not just a club made up of Germany and France.

Macron previously spoke at length about his vision for a closer EU at the Sorbonne in September, where he urged a joint eurozone budget and the introduction of an EU finance minister. Among other steps, he called for a joint asylum office, an aligning of national tax systems, and an EU-wide innovations office. Macron also suggested creating an EU rapid response force.

Macron was forced to delay its plans following the elections in France's most important EU ally, Germany. Talks on forming a government in Berlin lasted much longer than expected. Even after the new German government took office, officials in Berlin have seemed cautious about the changes proposed by Macron.

The French president is set to meet German Chancellor Angela Merkel on Thursday in Berlin. Last month, the two leaders pledged to bridge their differences and come up with a joint road map for reforms by June.