Bangladeshis call for war criminals to be tried

In Bangladesh, demands for a speedy trial for those accused of committing war crimes in the 1971 War of Independence are gathering momentum. 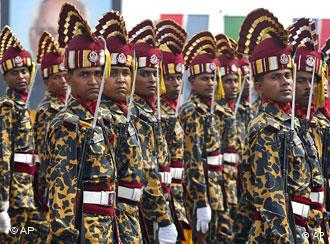 This year Bangladesh is celebrating 40 years of independence

Those who fought for the independence of Bangladesh 40 years ago say victory is not yet complete because the war criminals who supported West Pakistan and committed atrocities on pro-liberation forces have yet to be punished.

The leader of the independence movement, Sheikh Mujibur Rahman granted a general amnesty and subsequent governments have not confronted the controversial issue.

But since the Sheikh Hasina-led Awami League came into power in 2008, the government has started stepping up efforts to prosecute local people who collaborated with the Pakistani army and the armed militia, or razakars, created during the time.

Swapon Das, a journalist and volunteer member of the of the youth group formed by children of freedom fighters, says the war criminals have enjoyed positions of privilege in Bangladesh and gave the example of Moulana Abdul Mannan, who, according to government investigations was a member of a pro-Pakistan militia group and responsible for many killings. However, he became a cabinet minister and member of the parliament and died in 2006.

"Our first priority is to pressurize the government to punish the war criminals," Das explained. "We have organized protests and demonstrations. We want to make sure they don't have voting rights," he said, adding that a complete list of war criminals was sorely needed. 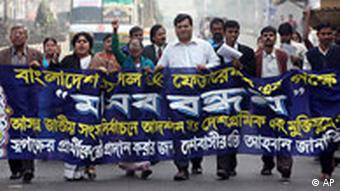 Das said that the efforts of the new generation had received a lot of support and appreciation but they had also angered groups such as Jamaat-e-Islami, a political party that supported West Pakistan during the War of Independence and was responsible for the creation of militias that were later accused of mass killings.

"Some workers of Jamaat-e-Islami attacked our office and there was even a court case. We were given death threats," Das reported. "They destroyed our documents and vandalized the office".

He also said that in some cases the families and children of war criminals had organized press conferences demanding a fair trial and punishment.

After two decades of investigation, the War Crimes Fact Finding Committee published a list of 1,775 suspects. It includes the names of pro-Pakistan Bengalis and Urdu-speaking migrants who were members of the Razakar and Al-Badr paramilitary forces organized by the Pakistani army. Six of thee accused, including five top leaders of Jamaat-e-Islami, are now in custody. A member of the Bangladesh National Party is also among the accused. A war crimes tribunal is expected to try them in the coming months.

Mohammad Nizamuddin, Secretary of the Freedom Fighters Residential Complex in Dhaka, is demanding the death penalty for war criminals. He believes that hundreds of thousands of independence activists, villagers, students and intellectuals were brutally tortured, killed and dumped in mass graves. 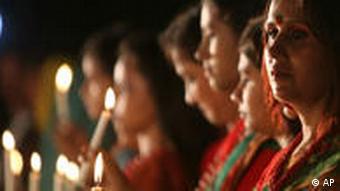 "Our sons and daughters have the right to be proud of us forever" he argued. "But if the children of war criminals support their parents, they are being unpatriotic."

Mohammad Nizamuddin thinks that war criminals who have not accepted the independence of Bangladesh should be punished. "Those who speak against the country are traitors and traitors should be given the death penalty" he said.

Laily Begum, who was raped by the Pakistani army during the war and later fought with the Himayat Bahini freedom fighters group, says the war criminals have to be punished because the many female war victims need justice to heal.

"For me even the death penalty is not enough" she said, demanding that war criminals be "cut into pieces and fed to the dogs." She said that only then she would find peace, adding that "if this country keeps them alive we will always be in pain."

In Bangladesh, the celebration of four decades of independence is often overshadowed by the debate about the war criminals.