Azerbaijan and Armenia accuse each other of violating cease-fire

Azerbaijan and Armenia have both claimed that the other side instigated fresh attacks, in the first hour of a delicate cease-fire brokered by Russia. Nagorno-Karabakh has seen repeated shelling over the last two weeks. 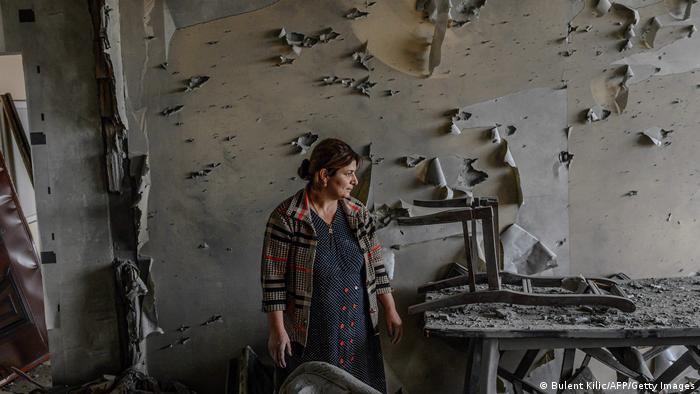 Azerbaijan and Armenia have both accused the other side of violating a Russian-mediated cease-fire that came into force at noon local time on Saturday (08:00 UCT).

"Armenia is blatantly violating the cease-fire regime," the statement said, claiming there had been attacks in two directions on the front line.

The cease-fire was agreed after 10 hours of talks sponsored by Russian Foreign Minister Sergey Lavrov.

Since September 27, more than 400 people have been killed in fighting over the contested region. Nagorno-Karabakh is officially part of Azerbaijan, but has been under control of ethnic Armenian forces backed by Armenia since the end of a separatist war in 1994.

Armenian Foreign Minister Zohrab Mnatsakanyan and his Azerbaijani counterpart, Jeyhun Bayramov, agreed to a cease-fire early Saturday "on humanitarian grounds for exchanging POWs and other detained persons and dead bodies," according to a statement read out by Lavrov.

The cease-fire deal was set to put a hold on a conflict that has threatened to spin out of control, potentially pitting Turkey, a close ally of Azerbaijan, against Russia, which has a defense pact with Armenia.

'A test of Russia's leverage'

Laurence Broers, the Caucasus program director at the London-based peacebuilding organization Conciliation Resources, said he had also heard that the cease-fire had been broken.

"The cease-fire is supposed to have been in place now for some three hours and there were already reports that fighting was continuing in the combat zone," Broers told DW on Saturday afternoon.

"This is a real test of Russia's leverage," he added, referring to the sticking power of the Russian-brokered cease-fire. "We are two weeks into a major war, and the last time there was a major escalation, Russia was able to broker a cease-fire after just four days."

"The entry of Turkey into this conflict in a much more explicit way is a kind of geopolitical power play. Turkey is seeking to expand its influence to project a more assertive foreign policy. And Russia, in a sense, is trying to contain that. This is a conflict in the former Soviet Union. Russia sees itself as the informal leader of an international coalition to resolve the conflict."

The group was created in 1992 by the Organization for Security and Cooperation in Europe (OSCE) to encourage a peaceful, negotiated resolution to the conflict over Nagorno-Karabakh amid a full-blown war that killed at least 30,000 people and ended without a peace treaty in 1994.

Saturday's statement indicated that negotiations moving forward would be mediated by the Minsk Group.

But Azeri foreign minister Jeyhun Bayramov said on Saturday that France was not being neutral when it comes to mediating the Nagorno-Karabakh conflict.

He told a news conference that France had violated the principle of neutrality, while the Azeri side had not noticed any such violations by Russia.

The warring countries held high-level talks in Moscow, looking to end the conflict in the contested region. Turkey and Azerbaijan expressed doubts over their success.