Armenia has accused Azerbaijan of targeting a historic cathedral in Nagorno-Karabakh. Two Russian journalists were injured in the shellings. Azerbaijan rejected the allegations, saying it did not target religious sites. 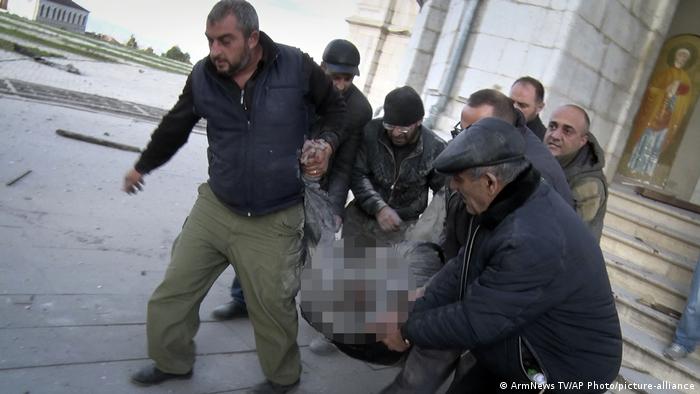 Armenia accused Azerbaijan on Thursday of shelling a cathedral in Nagorno-Karabakh.

It said that the dome of the Holy Savior Cathedral — also known as the Ghazanchetsots Cathedral — was pierced by a shell that damaged parts of the interior.

Local reports claimed that children and adults had been sheltering in the cathedral, but they were not killed or wounded.

Several hours later, the cathedral was hit again, wounding two Russian journalists, one of whom was critically injured, according to Armenian authorities.

The Armenian Foreign Ministry said the shelling was a "monstrous crime and a challenge to the civilized humankind." It said targeting religious sites amounted to a war crime. 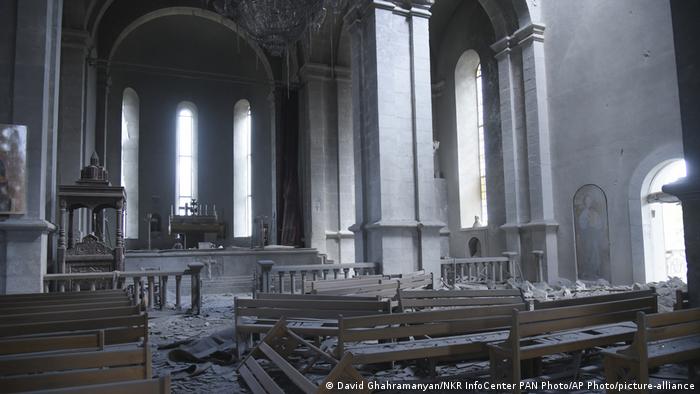 A priest at the cathedral told the Associated Press that he was anguished over the attack.

The cathedral in the town of Shusha was built in the 19th century and previously suffered damage during ethnic violence in 1920. It was restored after clashes in the 1990s. It belongs to the Armenian Apostolic Church.

Fighting in the region broke out two weeks ago, killing hundreds of people — including at least 350 members of the Nagorno-Karabakh military, an unknown number of Azerbaijani troops, and scores of civilians.

Despite international calls for calm, fighting has continued with heavy artillery, warplanes and drones.

The conflict has been simmering since the late 1980s, when Azerbaijan and Armenia fought a war over the disputed region amid the collapse of the Soviet Union.

Christian Armenian troops have controlled the region for decades, but the United Nations recognizes the region as belonging to predominantly Muslim Azerbaijan.

Turkey backs Azerbaijan in the conflict, while Russia backs Armenia.

International mediators were due to meet in Geneva on Thursday in a bid to halt the escalating conflict. However expectations of a breakthrough at the closed-door meetings were low.

The region's disputed capital Stepanakert was also targeted on Thursday.

Later on Thursday, Russian President Vladimir Putin invited the foreign ministers of Azerbaijan and Armenia to Moscow to take part in talks on Friday. This came after calls between all three leaders.

"Following a series of telephone discussions between the President of Azerbaijan Ilham Aliyev and the Prime Minister of Armenia Nikol Pashinyan, the President of Russia calls for a halt to military actions in the Nagorno-Karabakh conflict," the statement from the Kremlin added.