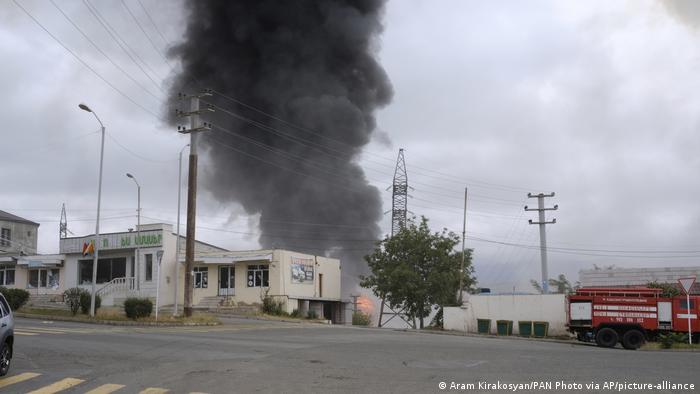 Turkish Foreign Minister Mevlut Cavusoglu will visit Ankara's close ally Azerbaijan on Tuesday for talks on the conflict in the ethnic Armenian separatist region of Nagorno-Karabakh.

Cavusoglu "will pay a working visit to Azerbaijan on October 6," the Foreign Ministry said in a statement. He is scheduled to meet President Ilham Aliyev and "also exchange views on the present situation in the Armenian-occupied Nagorno-Karabakh region of Azerbaijan," the statement continued.

The visit comes a day after Russia, the US and France called on Armenia and Azerbaijan to agree to an "unconditional cease-fire," and a day after NATO Secretary-General Jens Stoltenberg appealed in Ankara for Turkey to use its "considerable" regional influence to mediate in the conflict.

"We are deeply concerned by the escalation of hostilities. All sides should immediately cease fighting and find a way forward towards a peaceful resolution," Stoltenberg said, after direct talks with Cavusoglu. "And I expect Turkey to use its considerable influence to calm tensions."

The Kremlin again on Tuesday spoke out against the situation in the region: "So far the situation is deteriorating. People are still getting killed, which is absolutely unacceptable," Kremlin spokesman Dmitry Peskov told journalists.

For decades, Azerbaijan and Armenia have been locked in a simmering conflict over the Karabakh region, which broke away from Baku in a 1990s war that claimed 30,000 lives. Armenia effectively controls most of the geographical area, including parts still technically recognized as belonging to Azerbaijan. The latest fighting is the worst since a 1994 truce between the two former Soviet republics.

There are fears the ongoing clashes, which erupted late last month, could escalate into a full-scale war drawing in other powers such as Turkey and Russia. Turkey has close ties to Azerbaijan and a difficult relationship with Armenia.

"We, Turkey, say that we are always on the Azerbaijan side," Turkish President Recep Tayyip Erdogan said in a televised address on Monday. "As long as the Karabakh issue is not resolved, it will not be possible to end the unrest and conflict in the region."

Ottawa has announced an investigation into the alleged use of Canada's military technologies in the conflict, prompting the suspension of arms exports to Turkey.

"In line with Canada's robust export control regime and due to the ongoing hostilities, I have suspended the relevant export permits to Turkey, so as to allow time to further assess the situation," Foreign Minister Francois-Philippe Champagne said in a statement.

He said the country was investigating allegations that Canadian-provided imaging and targeting systems on unmanned drones were being used by Azerbaijan against Armenia.

Armenia and Azerbaijan are facing international pressure to deescalate tensions in the region, with the foreign ministers of Russia, the United States and France saying the conflict represented an "unacceptable threat" to the region's stability.

In a joint statement on Monday, the countries condemned the "unprecedented and dangerous escalation of violence" as well as the alleged targeting of civilian centers.

"The ministers call once again upon the conflicting parties to accept an immediate and unconditional cease-fire," the statement said.

As fierce fighting in the disputed region enters its sixth day, Armenia says it is ready to begin talks about a ceasefire with international mediators. Azerbaijan says it will only stop fighting if Armenia withdraws.