Fires are nothing new for Australia. But the blazes engulfing the country have now reached new dimensions and the country's leaders continue to dismiss climate change. For DW's Ben Fajzullin, it's personal. 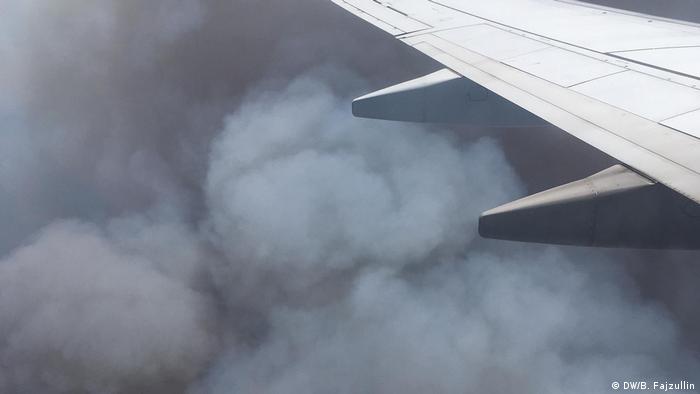 "From paradise to purgatory," an Aussie mate texted me, after his plane from Hobart dodged plumes of smoke flying into Sydney. I was also counting the fires on my flight to Brisbane. Every Australian state was burning.

The bushfires razed more than 4 million hectares (9.88 million acres), which is bigger than Belgium, in the last four months of 2019. They are set to burn for months more. Fire authorities called it unprecedented. The government refused to — and dismissed climate change.

Scientists don't link the two directly. But they say a hotter, drier climate meant more frequent and intense blazes. Well, temperatures reached record highs of around 50 degrees Celsius (122 degrees Fahrenheit) — melting roads in South Australia — and the drought was the worst on record. It's a deadly combination.

Several people perished. Over a thousand homes were destroyed. The mass evacuations of residents and tourists continued. Experts feared around half a billion dead animals, including a third of New South Wales' koalas.

The political disconnect was clear when Prime Minister Scott Morrison snuck off to Hawaii for an unannounced holiday, while the bushfires raged. His office tried to cover up what they insisted was "not a story." He was forced to issue an apology, after the details emerged.

However, the carnage continued. People were finding tiny dead flying foxes scattered along the New South Wales coast. Thousands of bats had abandoned their pups, exhausted and malnourished from traveling so far for food.

Deputy Prime Minister Michael McCormack was next to dismiss climate change, as the concerns of "raving inner-city lefties," arguing, "We've had fires in Australia since time began."

"Australia is politically dominated by climate change trivializers," according to Australian economist Steve Keen. "They deny the need for action on the argument that Australia contributes only 1.3% of global CO2 emissions."

"But they've always assumed that sea level rise would be the symptom, and Pacific island nations, who don't matter, the victims. Now with the bushfires, the populace is realizing that Australia may be the first victim."

NASA analysis showed Australia's bushfires generated over 250 million tons of carbon dioxide. That was close to half the country's annual CO2 emissions. Australia is one of the world's worst polluters per capita. It is the biggest net exporter of coal. And the government keeps opening new coal mines and gas fields.

Forward Communications managing director Greer Quinn said it was a global embarrassment: "Instead of arguing about climate change, the government needs to acknowledge humans haven't always done the best at protecting our planet."

"The only way to make a concerted change is if we do more to build our green capability in Australia. Right now, we have European and Asian companies installing large-scale solar farms in Australia. They'll sell our energy back to us in the future," according to Quinn.

Politicians only need look to the skies. Canberra was shrouded in smoke. Sydney even more so. SGS Economics estimated that the haze cost the nation's biggest city up to €30 million ($33.6 million) a day.

People called in sick. Doctors said the medical bills could go into the hundreds of millions. The smoke kept setting off fire alarms, sending workers outside to breathe in even more. 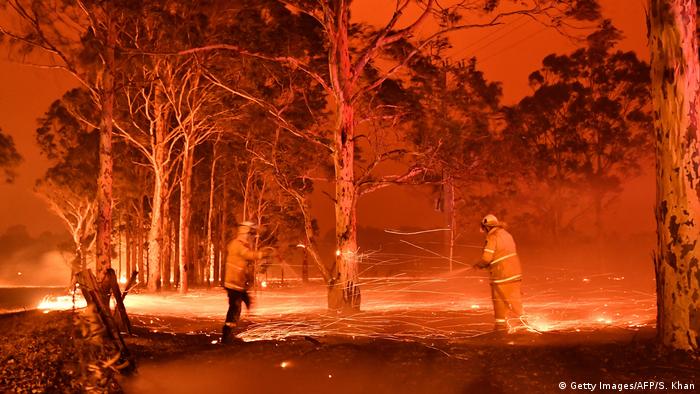 Firefighters battling bushfires around the town of Nowra in New South Wales, Australia

Ash clouds made their way to New Zealand, 2,000 kilometers (1,240 miles) away. Insurers received claims worth millions of euros. Locals complained that food prices were rising. Vintners were reeling. Some lost their entire harvests. Others said smoke could get into their grapes and make wine taste like the bottom of an ashtray. Australian wines are world-renowned.

The rural sector was hurting. Not just crops and livestock. The bushfires wiped out bookings for farm stays. Rural businesses were suffering. Money wasn't being spent. There were fears towns could shut down.

Scientists had said Australia was the most vulnerable continent to climate change — and yet a firefighter told me: "The Australian state and federal governments have been woefully ill-prepared for what they were warned would be catastrophic."

Up close and personal

London-based Keen has family in Sydney, which was on "catastrophic" alert for the first time. "This has turned suddenly personal." First thing in the morning, he checks the fire danger online. Keen said the fires were beyond anything he had ever experienced.

The firefighter I spoke to said: "These fires are so large and remote they can only be fought effectively from the air. Our current water bombing fleet is totally inadequate for the size and intensity of these fires and undoubtedly the fires coming."

Canberra needed a plan. Former Queensland fire commissioner Lee Johnson was one of about 30 fire chiefs lobbying the federal government to devise a bushfire strategy and fight climate change.

It shocked me to learn that my country didn't have a proper national plan! The states and territories have primary responsibility for responding to natural disasters.

But we've had fires in Australia since time began, as the deputy prime minister pointed out. I love my country. But I hate to see it burning. This was getting personal for me, too.

Firefighters are using a brief period of cooler temperatures to establish containment lines ahead of a weekend heatwave. Sydney's water supply is threatened by two fires. (27.12.2019)