Residents of three Melbourne suburbs were told it was too late to leave. A volunteer firefighter in the eastern state of New South Wales also died Monday amid the blazes. 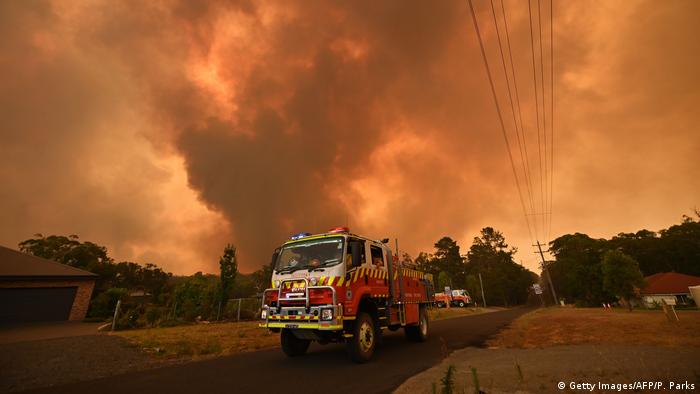 An emergency warning was issued in three northern suburbs of the eastern Australian city of Melbourne on Monday as fires continue to burn across the states of Victoria, New South Wales, South Australia and Tasmania.

Residents of Bundoora, Greensborough and Mill Park were told that it was too late to leave, and instead to "take shelter indoors" after the warning was sent out this afternoon around 3.20pm local time.

East Gippsland, a region in the far northeastern corner of Victoria, was projected to be the hardest hit by Monday's blazes. The area is home to about 80,000 residents and is a popular area for outdoor tourism.

Meanwhile, multiple fires in northeastern Tasmania were burning at an emergency level, according to the ABC, Australia's national broadcaster. The normally cool island state reached temperatures of more than double the summer average on Monday, with the state capital, Hobart, experiencing 40.8 C (105.4 F) — the city's hottest December day on record, according to the Bureau of Meteorology.

In New South Wales, the Rural Fire Service (NSW RFS) confirmed on Twitter that a volunteer firefighter died in Jingellic, a town southwest of Canberra, after a firetruck rolled over due to strong winds. Two others were also hospitalized with severe burns. Three volunteer firefighters have now died in fires since October.

In South Australia, more than 600 firefighters fought some 120 blazes across the state, according to local paper The Advertiser. Most of them were reported to have been caused by lightning strikes.

Canberra canceled its annual New Year's Eve fireworks as the danger of wildfires hitting the Australian capital rose. But authorities in New South Wales, where Sydney is located, said the city's   New Year's celebrations could go ahead on Tuesday despite rising temperatures.

The deputy premier of New South Wales, John Barilaro, had made calls for the event to be cancelled, and denounced it as being too dangerous. "The risk is too high and we must respect our exhausted RFS volunteers ... We're all in this crisis together," he wrote on Twitter.

Read more:Australia on fire as it marks hottest day ever

The city is expecting an audience of 1 million people to attend the Sydney Harbour's iconic fireworks display. The event is forecast to bring in AU$130 million (€81 million, US$91 million) in tourist cash.

Nine people have died and more than 1,000 homes have been destroyed since the early start of Australia's bushfire season in September. New South Wales has been the hardest hit by the fires, with the blazes continuing to spread across the country.

"If you don't need to be in the area, you need to leave," the New South Wales premier has said. Westerly winds and soaring temperatures are set to stoke flames across southern Australia and bring more devastation. (03.01.2020)

Experts have warned the death toll is expected to rise as bushfires continue to engulf the southeast coastal region of the country. The military has been deployed to bring relief. Smoke has reached as far as New Zealand. (01.01.2020)