Sydney New Year's Eve fireworks to go ahead despite wildfires

Sydney's multimillion-dollar New Year's Eve fireworks display will go ahead despite the wildfire crisis threatening the city. Australia has also confirmed that volunteer firefighters will receive some financial support. 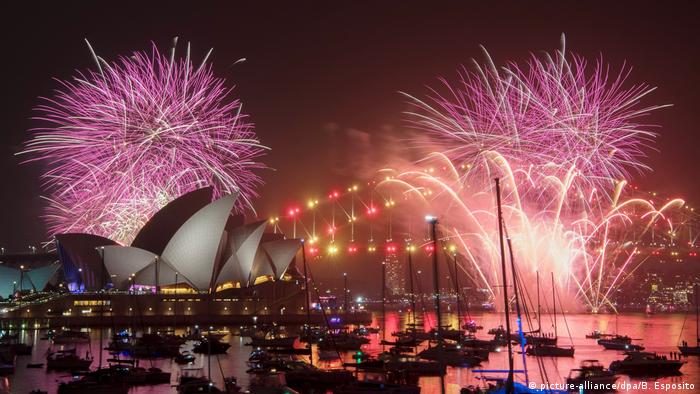 Morrison also said some of the volunteer firefighters who have been battling the blazes in the state of New South Wales will receive financial support.

"In the midst of the challenges that we face, subject to the safety considerations, I can think of no better time to express to the world just how optimistic and positive we are as a country," Morrison added.

Although the AU$6 million (€3.75 million, $4.19 million) display received official approval from the Sydney City Council, the fireworks could still be canceled at the last moment if the situation deteriorates.

The costly display has also come under attack for its environmental impact, as increasing pressure mounts on Morrison to make drastic changes to Australia's climate policy.

The Liberal politician also confirmed that volunteer firefighters will receive up to AU$300 a day and up to AU$6,000 if they fought fires for more than 10 days.

"The early and prolonged nature of this fire season has made a call beyond what is typically made on our volunteer firefighters," Morrison said on Sunday. The funding will be available primarily for those who are self-employed or work for small businesses.

Volunteers make up 90% of the firefighters battling the blazes in New South Wales, the state the most severely affected by the ongoing wildfires. Many of these volunteers have given up paid work to devote most of their time to fighting fires.

"A lot of people are using up their annual leave as well," said Sean Warren, a volunteer firefighter.

"A lot of people are just missing their families. They've skipped Christmas with their families and their grandchildren," he added.

Read more: Germany's firefighters on the decline as aging strikes

The opposition Labor Party has pushed for volunteer firefighters to receive compensation, but Morrison was at pains to stress that this was not a salary: it was merely to cover the loss of earnings.

Over 85 wildfires are still burning across New South Wales, with conditions expected to worsen in the new year as temperatures are predicted to skyrocket to 44 degrees Celsius (111 degrees Fahrenheit).

Nine people have died and over 1,000 homes have been destroyed since the fires began. Volunteer firefighters in other states will also be able to partake in the scheme.

Wildfires have raged around the world throughout 2019, laying waste to plants, animals and trees that store carbon — as well as human homes and lives. (19.12.2019)