Firefighters are using a brief period of cooler temperatures to establish containment lines ahead of a weekend heatwave. Sydney's water supply is threatened by two fires. 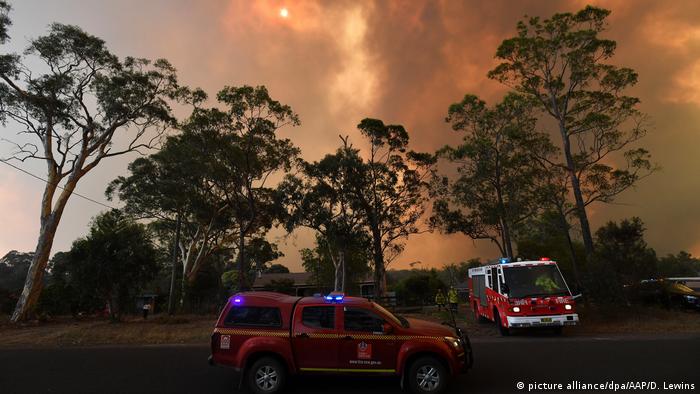 Firefighters capitalized on cooler conditions to establish containment lines but about 70 fires continued to burn across the state of New South Wales (NSW) — half of them uncontained.

Temperatures are expected to rise to 41 degrees Celsius (106 F) in some parts of the state on Sunday and the fire danger remains very high.

Emergency services are focusing on protecting water plants, pumping stations, pipes and other infrastructure from fires around Sydney.

Two fires are burning near Warragamba Dam, which provides water to about 80% of Sydney's 5 million residents. As well as fire damage to infrastructure, it faces contamination risks from ash run-off and debris.

"In recent days up to the cool change, the fires had been a potential threat to supply and assets, particularly in Warragamba and in the Blue Mountains," a spokesman for the state's water authority, WaterNSW, told Reuters news agency. "With the coming very hot conditions the fire situation may escalate in both those fronts and possibly elsewhere."

The dam is 65 kilometers (40 miles) west of Sydney and is at 44.8% capacity due to a prolonged drought. So far, the state's water infrastructure has avoided major damage. The Sydney Morning Herald reported that the lake and dam were almost completely surrounded by the Green Wattle Creek and Ruined Castle fires.

The Australian Defense Force announced on Friday that the army had been called upon to help firefighters. Specialist military personnel will be immediately deployed to 14 Rural Fire Service command centers throughout the state, it said.

Meanwhile, NSW Emergency Services Minister David Elliott was criticized for plans to go on a family vacation to Europe after the prime minister was widely condemned for a holiday in Hawaii while Australia burned.

In the state of South Australia, temperatures hit 42 degrees on Friday after a brief respite over Christmas, prompting authorities to declare a code red. The designation is meant to help protect residents from the heat.

Most of the state had a fire danger rating between high and very high.

Across the country, about 5 million hectares (12.35 million acres) of land have burned this fire season. Almost 1,000 homes have been destroyed.