Bushfires continue to burn in several regions of Australia amid unusually high temperatures. More than 800 homes have been destroyed by blazes in the past few months, and nine people have been killed.

Six fires in Australia's southeastern state of New South Wales (NSW) were rated at emergency level on Saturday, as the country continues to battle blazes that have been burning for weeks, destroying hundreds of homes.

Fitzsimmons said that the fires could not be beaten without the help of rain, which seems a forlorn hope — the Bureau of Meteorology has said no significant rainfall is to be expected in the next couple of months.

Some 3,000 firefighters are working to put out 100 bushfires across the state, with two of the fires classed as emergencies located close to the state capital of Sydney, Australia's largest city. Two members of the firefighting services were killed on Thursday while fighting blazes southwest of the city when their truck rolled off the road after a tree fell. Their deaths brought the death toll from the wildfires in the state to eight since early October.

Some of the fires were generating their own thunderstorms, according to the RFS. 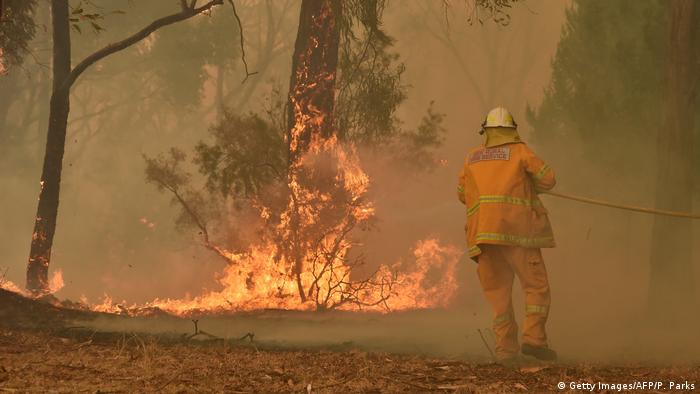 New South Wales is in a seven-day state of emergency

On Friday, massive bushfires raged in the hills near the state capital of South Australia, Adelaide, coming to within some 40 kilometers (25 miles) of the city. Authorities confirmed that one person died and 15 homes were destroyed, with another person critically injured while fighting to save his home. More than 40,000 hectares (98,842 acres) were reported to have burnt across the state.

In the eastern state of Victoria, authorities said 142 fires had broken out since Friday. One was reported to be burning at an emergency level late on Saturday afternoon.

The wildfires in Australia have erupted earlier than usual after an abnormally warm and dry winter. Some 3 million hectares (7.4 million acres) of land have been razed across the country during the past few months.

Meanwhile, Australian Prime Minister Scott Morrison has arrived back in the country in response to the crisis, cutting short a family holiday in Hawaii for which he has been heavily criticized.

On Friday, Morrison said he deeply regretted "any offense caused to any of the many Australians affected by the terrible bushfires by my taking leave with family at this time."

Morrison is also under fire from climate activists, who say he and his government are prioritizing Australia's economic interest in coal exports over the damage to the climate caused by fossil fuels, which scientists say is a likely factor in the current bushfire crisis.

The Australian government has listed the koala as endangered in huge swaths of the country, upping its conservation status from vulnerable.

Australians warned against surge in snakes and spiders 17.12.2021

A weather phenomenon in the Pacific means people in New South Wales are being plagued by snakes. The ambulance service is warning people to watch out.