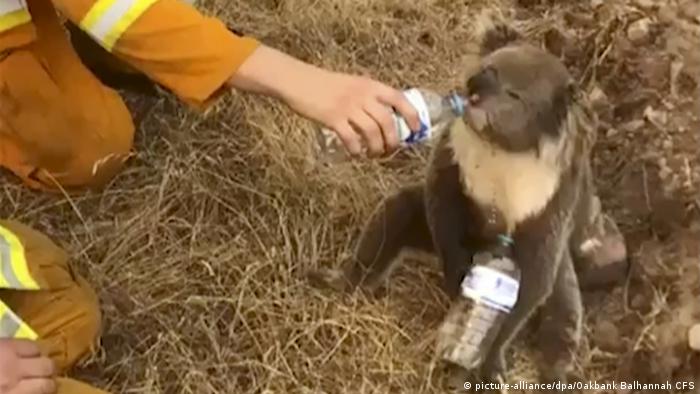 A thirsty koala suffering from the soaring temperatures in South Australia was helped out by a group of cyclists who stopped to offer it a drink from their water bottles.

A video posted on Instagram by cyclist Anna Heusler shows the desperate marsupial climbing onto the frame of a bicycle to get a better sip.

The cyclists, who were riding towards Adelaide in 40°C (104°F) heat, spotted the koala as they came around a bend on the road. "Naturally, we stopped because we were going to help relocate him off the road," Heusler told Australia's 7 News, as reported in the New Zealand Herald.

"I stopped on my bike and he walked right up to me, quite quickly for a koala, and as I was giving him a drink from all our water bottles, he actually climbed up onto my bike.

"None of us have ever seen anything like it."

The pictures are heartwarming, but the incident also shows the dangers posed to the animals' existence by the current fire situation in the country. At least 2,000 koalas died in devastating and widespread bushfires across South Australia and the east coast of the continent, a parliamentary inquiry heard earlier in December.

The animals died either in bushfires or from starvation and dehydration afterwards, North East Forest Alliance president and ecologist Dailan Pugh told the inquiry.

Director of the Total Environment Centre Jeff Angel warned that the risk to koalas' survival was at emergency level due to the bushfires, which have caused loss of habitat for the marsupials. "We urge the government to do more, and quickly," Angel told News Ltd on Saturday.

The Earth is entering 2020 facing "the greatest extinction event since the dinosaurs," the World Wide Fund for Nature (WWF) is warning. In 2019, some endangered species made gains and others suffered setbacks. (27.12.2019)