High temperatures and strong winds are fanning bushfires in Australia. Residents in some areas have evacuated as a precaution. 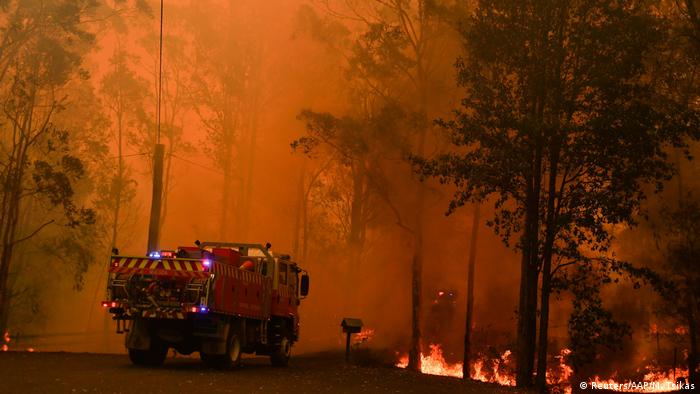 Australians braced for a fresh wave of bushfires on Tuesday as high temperatures and strong winds were expected to worsen conditions.

Sydney and other cities were blanketed in thick smoke, disrupting transportation and prompting warnings from health authorities.

More than 100 fires are burning in New South Wales and Queensland, some since November.

To the northwest of Sydney, several fires burning for weeks have formed a "megafire" along a front of 60 kilometers (37 miles).

Temperatures were forecast to soar to above 40 degrees Celsius (104 Fahrenheit) and winds were expected to strengthen under low humidity conditions, raising fears fires could spread to more populated areas.

While no official evacuation order was given, some residents in parts of eastern Australia fled their homes as a precaution.

How satellites will help solve the climate crisis

As the world grapples with a climate emergency, scientists are exploring satellite technology solutions to help us combat climate change. DW visited two space innovation events in Bremen and Cologne to find out more. (05.12.2019)

The "deoxygenation" of oceans is having disastrous consequences for sea life. It will "affect hundreds of millions of people," environmental experts warn. (07.12.2019)

New Zealand Prime Minister Jacinda Ardern has confirmed that many people remain unaccounted for after a volcano erupted on an island off the coast. Police say they don't expect any more survivors. (09.12.2019)