The oceans are losing oxygen due to climate change, with dire consequences for marine life and vulnerable communities and fisheries, a nature conservation report revealed Saturday.

This is the "ultimate wake-up call" for humanity on ever-increasing carbon emissions, according to the report, published at the UN Climate Change Conference in Madrid.

The authors say the report, "Ocean deoxygenation: Everyone's problem," is the largest ever peer-reviewed study into the causes and impacts of, and possible solutions to, the ocean's oxygen loss.

"With this report, the scale of damage climate change is wreaking upon the ocean comes into stark focus. As the warming ocean loses oxygen, the delicate balance of marine life is thrown into disarray," said Dr Grethel Aguilar, acting director general at The International Union for the Conservation of Nature (IUCN), a body composed of governmental and civil society groups. 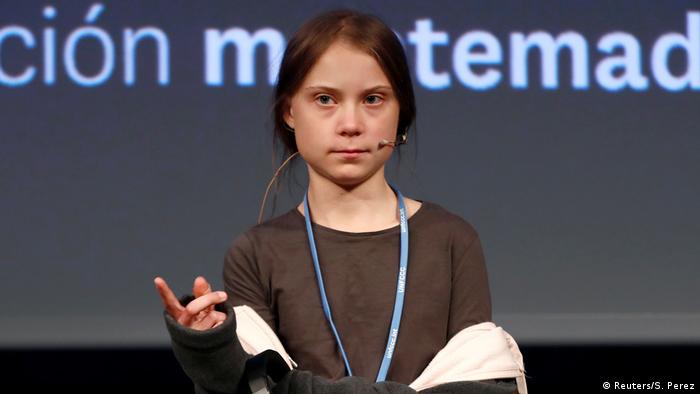 Pointing the way: Swedish activist Greta Thunberg has been leading protests across the globe as she tries to get world leaders to "listen to the science"

"The potentially dire effects on fisheries and vulnerable coastal communities mean that the decisions made at the ongoing UN Climate Change Conference are even more crucial. To curb ocean oxygen loss alongside the other disastrous impacts of climate change, world leaders must commit to immediate and substantial emission cuts."

According to the report, areas of water with low oxygen concentrations are expanding, with roughly 700 ocean areas across the globe now affected by low oxygen conditions — up from only 45 in the 1960s. Over the past five decades, the areas completely depleted of oxygen have quadrupled.

"This is perhaps the ultimate wake-up call from the uncontrolled experiment humanity is unleashing on the world's ocean as carbon emissions continue to increase," said Dan Laffoley, senior adviser on marine science and conservation in IUCN's Global Marine and Polar Programme and a co-editor of the analysis. "Ocean oxygen depletion is menacing marine ecosystems already under stress from ocean warming and acidification. To stop the worrying expansion of oxygen-poor areas, we need to decisively curb greenhouse gas emissions as well as nutrient pollution from agriculture and other sources."

Disaster for sea-life, consequences for humanity

The effects of the oceans' lack of oxygen is beginning to alter the balance of marine life, favoring low-oxygen tolerant species (e.g. microbes, jellyfish and some squid) at the expense of low-oxygen sensitive ones (many marine species, including most fish).

Tuna, marlin and sharks are particularly vulnerable to the changes. The species are starting to be driven into increasingly shallow surface layers of oxygen-rich water, making them more exposed to excessive fishing.

The report predicts that the ocean will lose 3-4% of its oxygen inventory globally by the turn of the next century. Most of the losses are anticipated to be in the upper 1000 meters (3300 feet) of the water column, which is richest in marine biodiversity.