Thousands of people marched in Madrid to demand immediate action to protect the planet. World leaders are meeting nearby, but experts called their plans insufficient to fend off climate change's catastrophic effects. 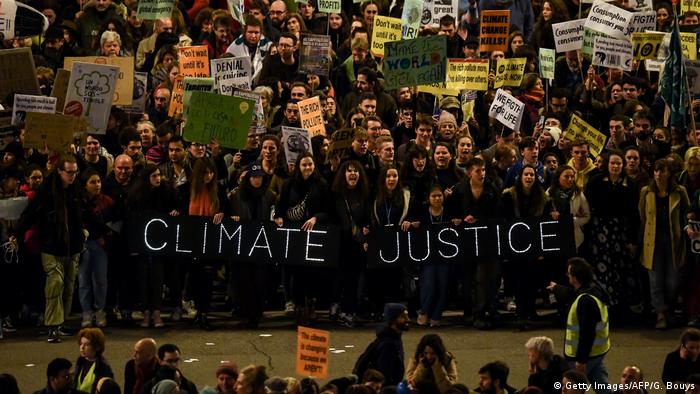 "Time for Action" is the motto of the United Nation's COP25 climate conference and the demand made by thousands of protesters as they took the streets in the center of Madrid on Friday.

Environmental activists dancing and playing music were joined by grandmothers and families with children as people from all different walks of life came together to protest in an atmosphere akin to a festival.

But the message was much more serious and very clear: "Climate Action Now!," read one sign. "One Earth = One Chance," said another. 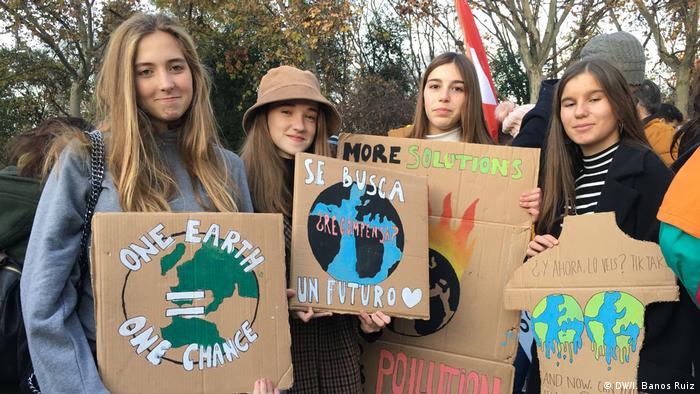 Read more: Climate change near 'point of no return'

"Governments are ignoring the climate. They're only interested in their own interests and not in the common interest — the interest of the next generations," 15-year-old Danny, who traveled from Colombia with her parents to take part in the protest, told DW.

Her comments echoed those of Swedish environmental activist Greta Thunberg.

"People want everything to continue like now, and they are afraid of change and change is what we young people are bringing," she said. "That is why they want to silence us, and that is just the proof that we are having an impact, that our voices are being heard, that they try so desperately to silence us."

Friday's protest took place just miles away from where representatives from all over the world are meeting over two weeks at the United Nation's COP25 climate conference to discuss measures to decrease carbon emissions as part of the Paris Agreement.

Under the accord, ratified by almost 200 countries, nations have drawn up their own targets to reduce carbon emissions with the aim of limiting global warming to well below 2 degrees Celsius compared to pre-industrial levels by the end of the century.

In the four years since the agreement was made in 2015, negotiators have been working on the so-called "rule book" — a set of regulations that will govern the implementation of the Paris agreement set to take place next year.

But clashes among countries over how to monitor their emissions and proposed carbon markets have hindered the process.

"We have to unite as a global team, otherwise we won't manage to solve this climate crisis, which is the biggest crisis humanity has ever faced," said Jenny, who came from Germany to participate in the Madrid demonstration. "Governments are not doing enough, so we as civil society have to take the lead."

Funding to help developing countries to adapt to climate change and pay for the damage that has already been inflicted is also another sticking point in negotiations. 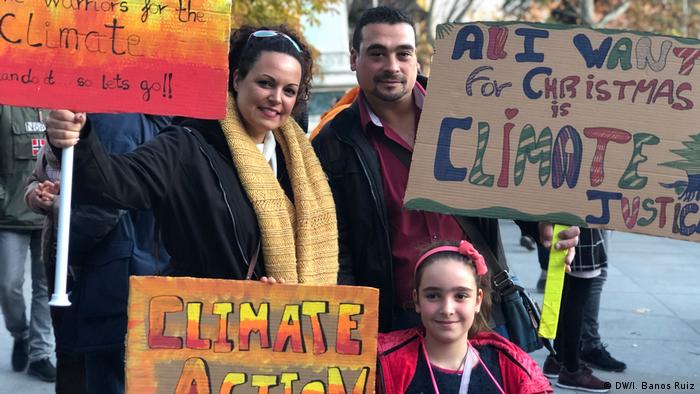 The world will need to pull together for real change to happen, protesters said

Meanwhile, experts have said that national targets to reduce their emissions are not ambitious enough to be in line with the Paris Agreement and would potentially see a temperature rise of at least 3 degrees Celsius.

"We can achieve a change if we act all together, but we need to really engage," said Spanish protester Pilar, who was at the protest with her husband and daughter. "We need money to stop being the most important thing, to have companies that only seek economic benefit with no limit. If we unite, we can achieve the necessary change."

Global leaders are set to descend on the COP25 climate conference for the second week of negotiations, but whether their attendance will lead to higher ambitions and the change protesters are calling for remains to be seen.

What is clear is that for protesters like 15-year-old Danny, only action will give her the life that others have had before her and that she desperately wants her own children someday to enjoy.

"I want to offer a bright future to my children," she said. "I want them to be able to drink clean water and breathe clean air."

The teenage Swedish climate activist has arrived in Lisbon after making her second boat trip across the Atlantic in four months. She is expected to attend a demonstration at the COP25 climate conference in Madrid. (03.12.2019)