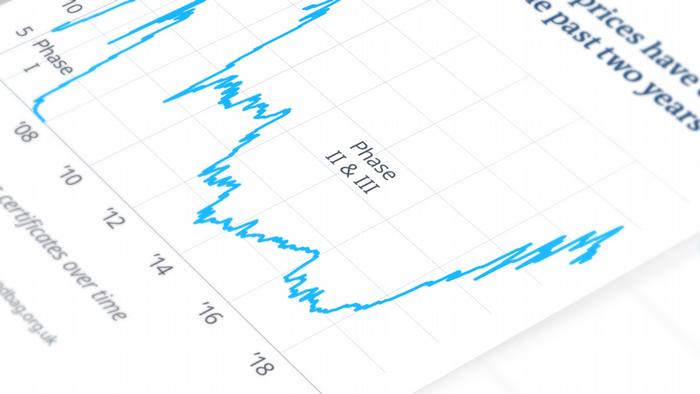 World leaders are gathered in Madrid at the moment to discuss how to tackle the climate crisis and limit global warming to 2 degrees Celsius. As the third-biggest polluter in the world after China and the US, the European Union’s approach to the climate crisis will be crucial. One possible strategy is to put a price on carbon, as the EU has been doing for the past 15 years through its cap-and-trade system.

The idea is to create an incentive for polluters to voluntarily lower their emissions. But the EU’s cap-and-trade system has had problems from the start: The cap on emissions has been too high, and cost on emissions too low to have an effect. Cutting the maximum volume of emissions faster and setting a minimum price could help the EU go carbon-neutral by 2050.

1. How does the EU emissions trading work?

The EU sets a cap on how much greenhouse gases the companies with the highest emissions can produce. The system currently covers 11,000 power plants and other high-energy installations, as well as aircraft operators in the EU. Together, they produce around 45% of the EU’s emissions. The hope is, as the biggest emitters go green, the rest of the economy will follow.

For every metric ton of CO2 (or an equivalent amount of other greenhouse gases, like methane) a company is allowed to emit, it gets a certificate. If it emits less than its allowance, it can sell off its surplus certificates; if it exceeds its limit it must buy additional certificates to cover its extra emissions. This establishes a carbon market, with the cost of emitting carbon set by the laws of supply and demand. Over time, the EU issues fewer and fewer certificates, forcing companies to emit less and less, and pushing up the cost of certificates.

Carbon trading system are seen as a cost-effective way to cut emissions. Companies have a choice between investing in carbon reduction measures and buying emissions certificates, meaning the market will find the most economical ways of reducing emissions. "Politically, they are often easier to establish than direct bans," adds Oldag Caspar, a carbon policy analyst at Germanwatch, a development NGO.

The overarching goal is a carbon-neutral EU by 2050. The emissions trading system is one of the major tools by which the European Union is trying to reach that goal. In contrast to a direct CO2 tax, a cap-and-trade system puts a fixed limit on the amount of emissions allowed. That makes it easier for the EU to keep track of progress toward its climate goals, and whether these goals are in accordance with international efforts like the Paris Agreement.

The trading system set out to ensure that, by 2020, the companies covered emitted 21 percent less CO2 than they did in 2005. By 2030, emissions should be down 43 percent compared to 2005. But the EU’s long-term goal, in which the trading system plays a huge part, is to go entirely carbon-neutral by 2050.

The 2020 goal has already been reached ahead of time. Still, "to reach the EU’s long-term goals, the last certificates would need to run out in the 2040s," says Caspar. The EU’s plan is to reduce the number of new certificates issued by 48 million each year between now and 2030. But at this rate, the cap will only reach zero in 2057. And that’s ignoring other certificates floating around the system – those leftover or stored up in previous years, or issued under various exemptions that mean many companies are issued extra certificates not counted under the overall cap. 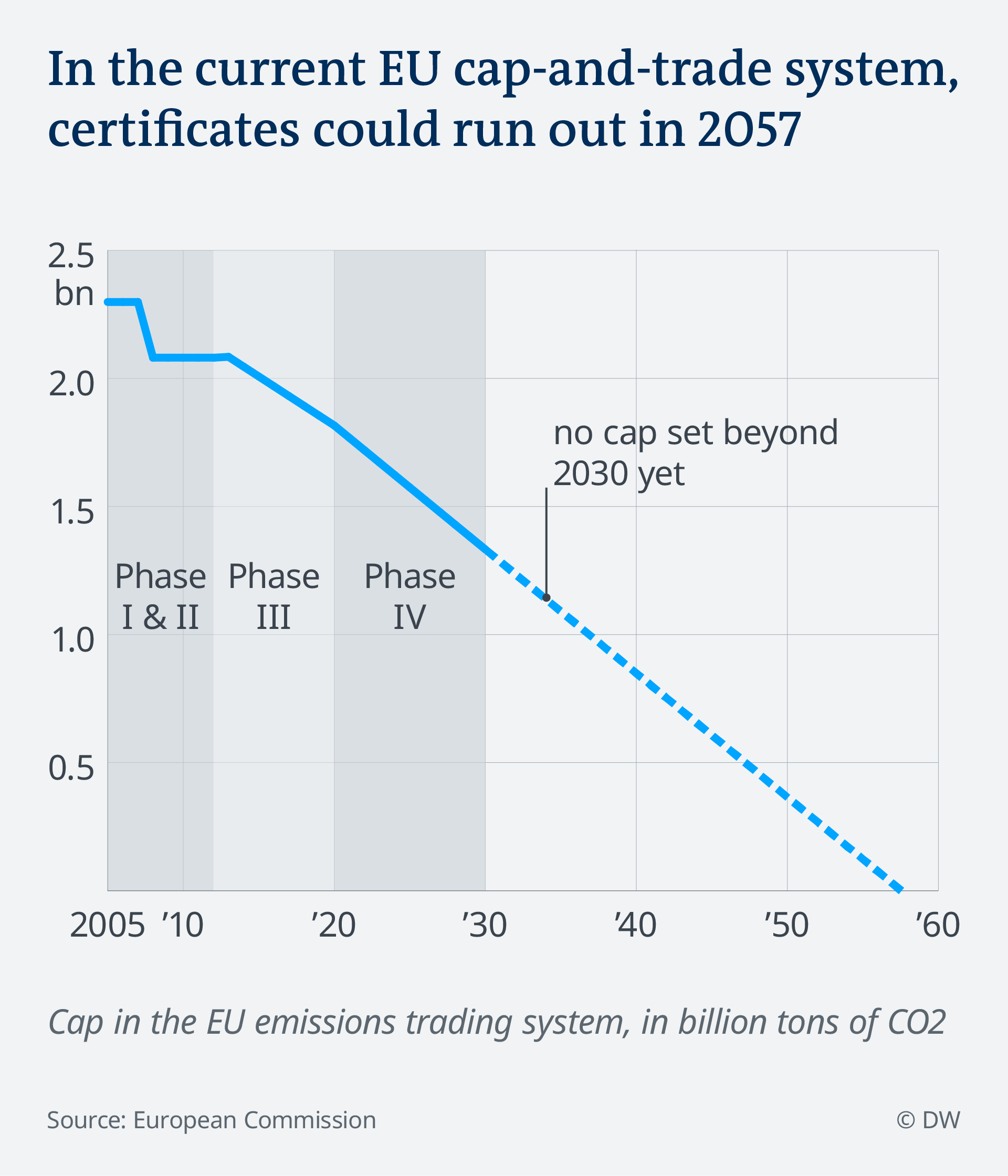 3. How much is being traded?

In 2018, the EU issued around 1.7 billion new certificates, meaning companies were allowed to emit at least 1.7 billion tons of CO2. Setting the appropriate cap is one of the most important challenges of an emissions trading system. If you put too many certificates on the market, there won’t be any incentive to cut emissions. If you put out too few, some fear companies might move production to a country without trading systems. Once a plan for the cap is set, it can’t easily be changed either, or companies won’t be able to plan ahead.
"The EU was too cautious about the cap in the beginning," says Caspar. In fact, it issued more certificates than the companies already produced in emissions. And the 2008 recession also slowed production, contributing to a fall in emissions that might have happened even without cap-and-trade. 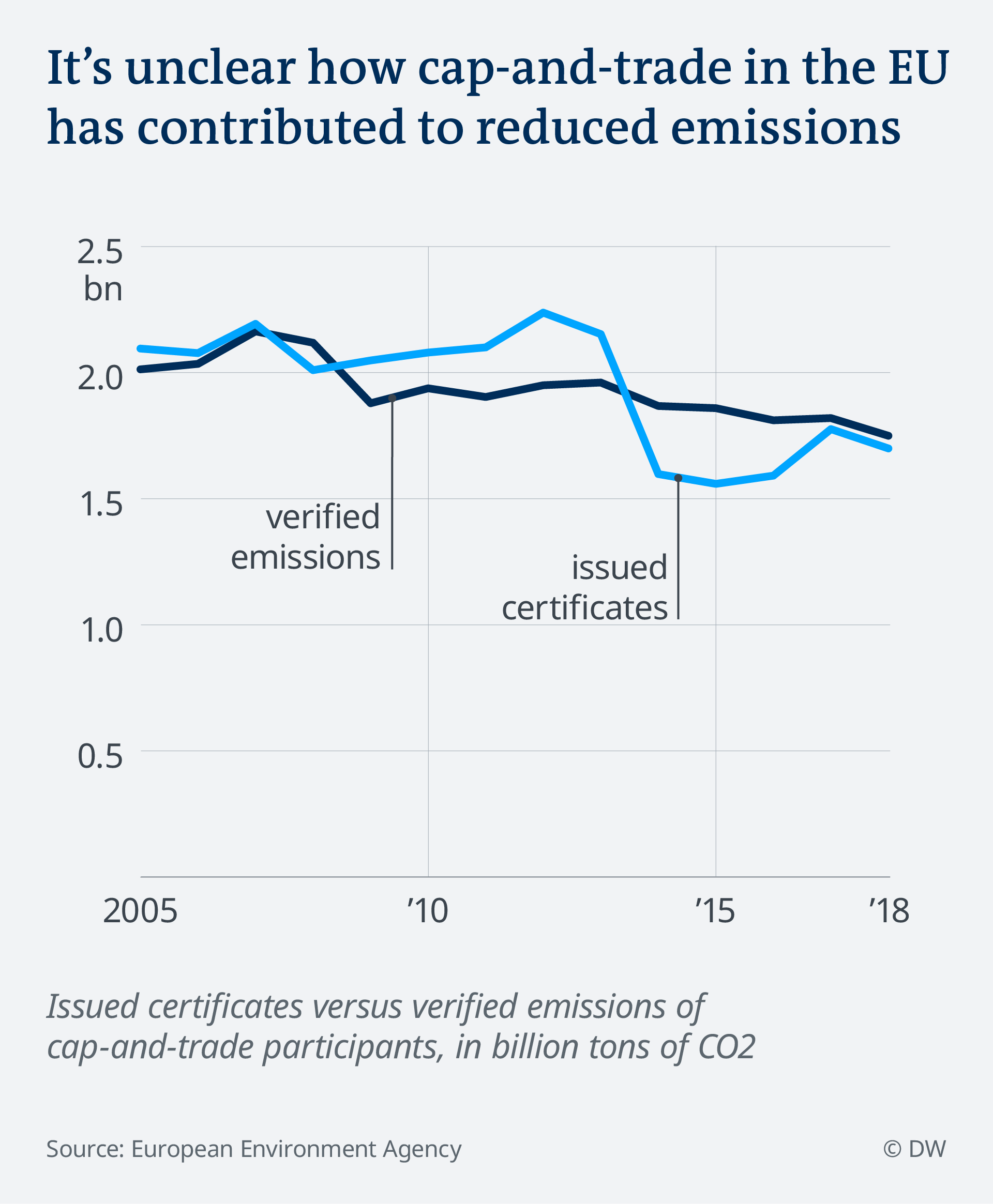 With an oversupply of certificates on the market, their cost was far too low to prompt companies to cut emissions any further. Even more recently, it’s unclear how much of the actual emissions reduction is due to the ETS.

The EU itself, as well as Germany’s Federal Environmental Ministry and multiple studies have argued that the oversupply in certificates has weakened the system from the start.

The price was far too low for many years. By the end of the system’s first phase (from 2005 to 2007) the price of emitting a ton of carbon had fallen to zero. After a restart with phase two, the price quickly fell again and hovered around only 5 euros from 2011 to 2017. That’s not much in comparison to, for example, the 23 Euros German non-profit Atmosfair currently charges its users if they want to offset emissions from flying. 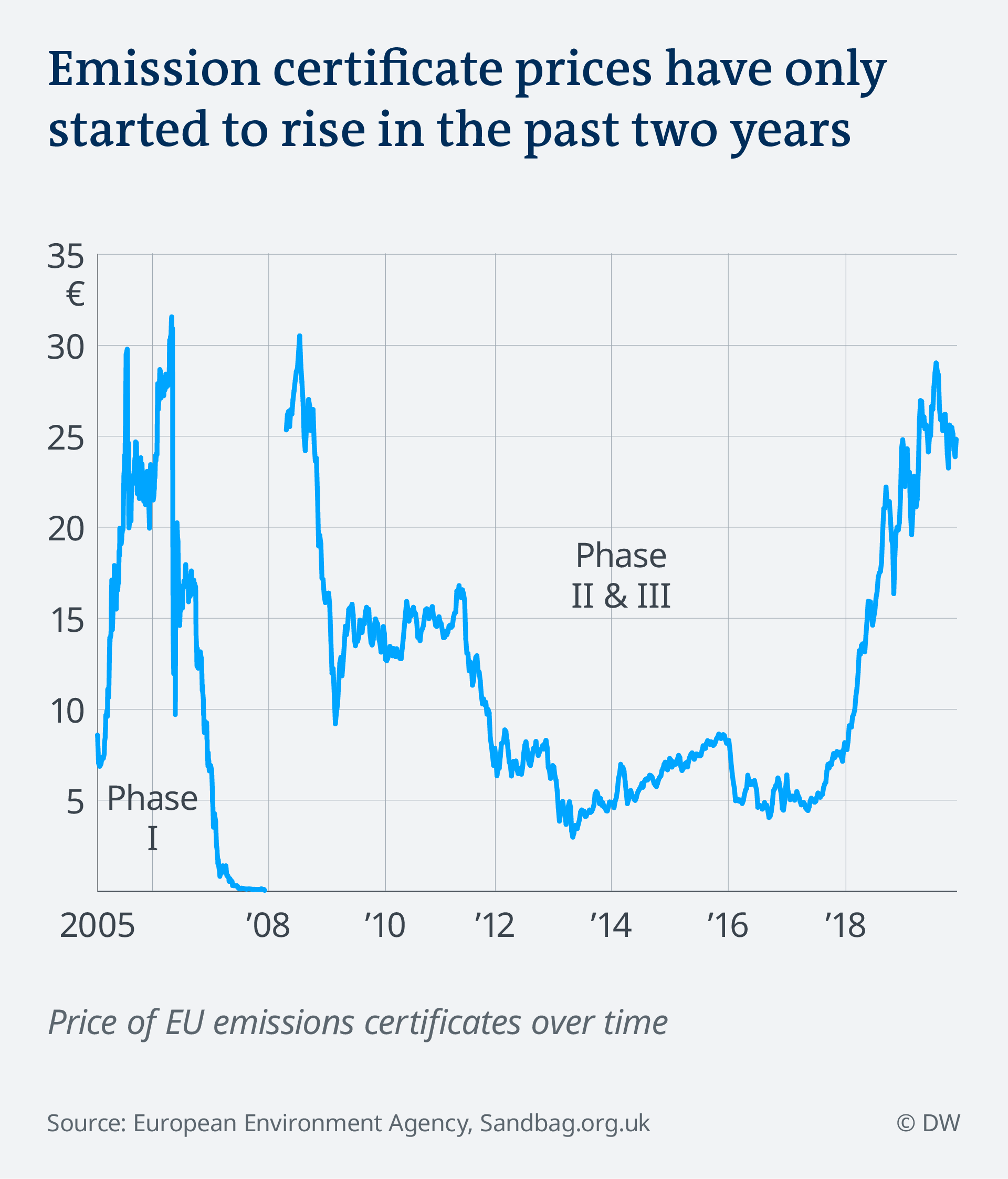 In the past two years, though, certificate prices have risen to around 25 euros. The reasons why are complex, but a major factor was likely that the EU took action to boost the carbon price by removing some of the hundreds of millions of excess certificates already on the market.  "It was a signal to participants that the EU is introducing reforms and taking care of its system," says Christian Flachsland, professor of sustainability at Hertie School and an expert on carbon markets.
Flachsland says the main problem with the system has been a lack of credibility. The EU has a track record of bowing to pressure from business to weaken the system, and many are skeptical it will push the carbon to price to a point that has a real impact on industry.

If investors expect the carbon price to rise, they have an interest in buying up certificates now. But without faith that the EU will lower the cap as promised, there is no guarantee those certificates will hold their value.

5. How does the system need to change?

It is widely agreed that lowering the cap more quickly and introducing a minimum price would help strengthen the trading system. To make the system more effective and work toward a carbon-neutral EU by 2050, the cap needs to fall faster. From 2021, it will shrink by 2.2 percent of the 2013 cap – or 48 million tons of CO2 – per year. Caspar recommends speeding that up to at least 3 percent, or 66 tons per year, as soon as possible. That would mean the last certificates would be issued in the mid-2040s instead of 2057. 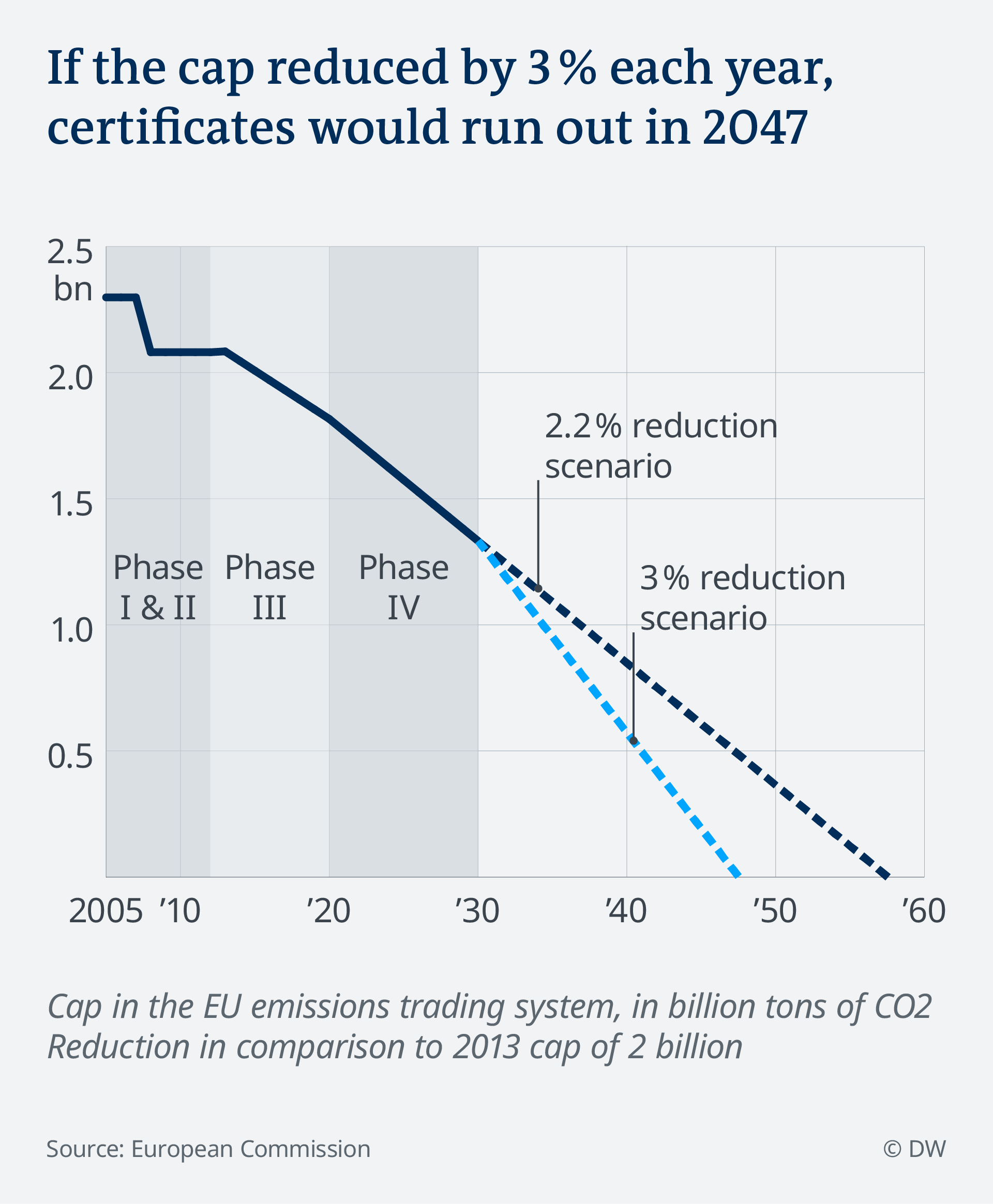 Brigitte Knopf, secretary general of the Mercator Research Institute on Global Commons and Climate Change whose work focuses on international climate agreements, believes other adjustments to the system are needed: "We talk too much about goals," she says, "and too little about their implementation." An expertise co-authored by Knopf and Flachsland recommends introducing a guaranteed minimum price for certificates. It would provide security for investors, as well as strengthening long-term trust in the system and providing a stable incentive to cut emissions, argues Flachsland.

Knopf recommends a minimum price well above 20 euros. Additionally, she recommends other measures that would put a price on carbon: raising taxes on non-renewable energy, favoring climate-friendly businesses in EU tenders and grants, or removing subsidies for fossil fuels.

Europe isn’t the only place with an emissions trading system. Australia, California, South Korea or China all have their own versions of cap-and-trade. "China, for example, has been watching the European system for years," Caspar says. Whether cap-and-trade succeeds or fails in the EU will send a signal to the international community.