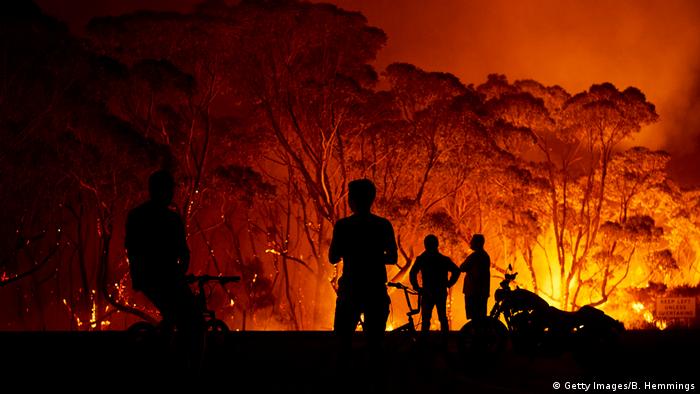 Australian Prime Minister Scott Morrison has deflected blame and stood by the government's stance on climate change on Sunday, as the country's devastating bushfires claimed another life, raising the death toll to 24.

Morrison, who has been severely criticized for his "slow" response to the fires, told a press conference on Sunday that it was not the time to blame anyone.

"There has been a lot of blame being thrown around," Morrison said. "And now is the time to focus on the response that is being made. Blame doesn't help anybody at this time and over-analysis of these things is not a productive exercise," the premier added.

"There is no dispute in this country about the issue of climate change globally and its effect on global weather patterns and that includes how it impacts in Australia," said Morrison, who was earlier slammed for downplaying the link between climate change and Australia's escalating threats of drought and wildfires.

The Australian prime minister also defended his government's performance on climate change. "I have to correct the record here. I have seen a number of people suggest that somehow the government does not make this connection. The government has always made this connection and that has never been in dispute.''

Cooler weather brought some relief to fire-ravaged Australia on Sunday after an "awful day" of blazes claimed another life, bringing the death toll to 24. But authorities have warned that conditions remained volatile.

Thousands of firefighters were battling almost 200 blazes, many of them still burning out of control, in the southeastern states of New South Wales (NSW), Victoria and South Australia.

"The weather conditions have improved in NSW and Victoria, but there are still many fires raging and there's a significant firefighting effort continuing,'' Prime Minister Scott Morrison, who has faced heavy criticism for his handling of the crisis, told a news conference.

A massive police and military effort is also ongoing to carry out evacuations and get supplies to communities trapped by the fires.

Thousands fled their homes on Saturday as soaring temperatures and strong winds produced some of the most dangerous conditions seen this bushfire season.

A 47-year-old man died trying to protect his friend's property in rural NSW, while in Victoria six people remained unaccounted for.

"It's not something we have experienced before," said NSW Premier Gladys Berejiklian. "The weather activity we're seeing, the extent and spread of the fires, the speed at which they're [moving], the way they are attacking communities that have never seen fire, is unprecedented."

Sydney experienced its highest-ever temperature of 48.9 degrees Celsius (120 Fahrenheit) on Saturday, along with winds of up to 80 kilometers (50 miles) per hour, prompting fears a fast-moving blaze could reach the city's outskirts.

"We are getting reports that the property losses, the damage and destruction, is likely to be numbering in the hundreds as a result of yesterday's fire activity and fire spread."

A southerly change overnight brought cooler air and some light rain to parts of NSW and neighboring Victoria, as well as hope that firefighters will be able to bring some of the blazes under control.

Australia's deadly fires have burned through more than 5.25 million hectares (13 million acres) of land since September, causing catastrophic damage to property and wildlife.

Prime Minister Morrison took the unprecedented step on Saturday of calling up 3,000 of Australia's army reservists to support firefighters — a move RFS Commissioner Fitzsimmons, who is leading NSW firefighting efforts, says he only found out about from the media.

"It was disappointing and [there was] some surprise to hear about these things through public announcements in the middle of what was one of our worst days this season," he said. "We spent a fair amount of the day yesterday trying to seek clarity."

Britain's Queen Elizabeth II, who is Australia's head of state, has said she was "deeply saddened" by the bushfire crisis.

"My thanks go out to the emergency services, and those who put their own lives in danger to help communities in need," the 93-year-old monarch said in a statement on Sunday. "Prince Philip and I send our thoughts and prayers to all Australians at this difficult time."

Celebrities have also praised firefighters and pledged money to help affected communities. US singer Pink tweeted Saturday that she was donating US$500,000 (€450,000), a pledge that was matched by Australian actor Nicole Kidman.

"Our family's support, thoughts and prayers are with everyone affected by the fires all over Australia," Kidman posted on Instagram. "We are donating $500,000 to the Rural Fire Services who are all doing and giving so much right now."

"If you don't need to be in the area, you need to leave," the New South Wales premier has said. Westerly winds and soaring temperatures are set to stoke fires across southern Australia and bring more devastation. (03.01.2020)

Experts have warned the death toll is expected to rise as bushfires continue to engulf the southeast coastal region of the country. Tourists have been told to leave the area. Smoke has reached as far as New Zealand. (01.01.2020)