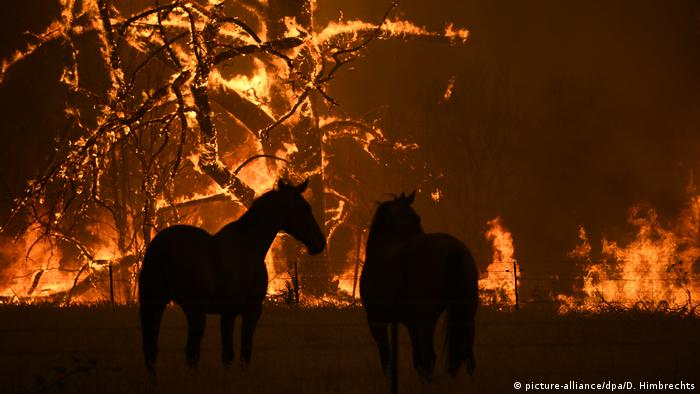 The announcement was made the same day two people lost their lives to the fires.

Mass evacuations have been taking place in preparation for the weekend as Australia braces itself for one of the worst days of the disaster thus far.

"Today's decision puts more boots on the ground, puts more planes in the sky, puts more ships at sea," said Morrison, who has been heavily criticized for his response to the monthslong crisis.

"The scale of the fires is stretching resources on the ground and there are clearly communities that need additional help,"  Morrison said. The reserve brigades will assist in delivering supplies to rural communities, evacuating people threatened by the fires, and helping reopen roads.

Defense helicopters and planes are being deployed to help with logistics support and evacuations. A further €12.5 million ($14 million) will be spent to lease four firefighting planes. Morrison also said defense force bases will be used to provide temporary accommodation.

In Australia, managing bushfires is normally the responsibility of state governments and fire services, but due to the scale of the disaster, a national response is required, Morrison said.

Authorities confirmed that two people died due to wildfires on Kangaroo Island off the coast of South Australia, bringing the overall nationwide death toll to at least 23.

The island, popular with tourists and famous for its wildlife, also lost large parts of its Flinders Chase National Park to the blazes. Fires began on December 20 and have now burnt more than 1,000 square kilometres (386 square miles) of land.

"There will be very significant wildlife losses on the island," said South Australia Premier Steven Marshall. The park is home to kangaroos, koalas and echidnas.

Local authorities say the fires are "virtually unstoppable" and will continue to burn for several more days.

A state of emergency has been declared across much of the country's southeast and more than 100,000 people have been told to leave their homes across three states.

New South Wales Premier Gladys Berejiklian called on residents in areas threatened by fires to leave as quickly as they can as the state braces for "another terrible day."

"All of the major road networks are still open but we can't guarantee that beyond the next few hours. So there are still windows for people to get out," she urged.

New South Wales Rural Fire Service Deputy Commissioner Rob Rogers warned that residents were "likely to lose homes" and that it would be "a success if no lives are lost."

"There is potential for the fire to break out, cross the (Warragamba) dam and move into the western suburbs of Sydney," he said. "That fire is burning. It has the potential to come out into more populated areas this afternoon,'' Rogers added.

"Leaving it until today is cutting it fine. The sooner you make that decision the better and I would say do it now. Don't leave it any longer because the window will shrink and will shrink very quickly."

More than 130 fires are burning in New South Wales and almost half of those are out of control.

Temperatures in parts of the state are predicted to soar in the mid-40s Celsius (113 Fahrenheit) with low humidity and strong winds.

In the state of Victoria, a total of 48 fires were burning across almost 320,000 hectares (791,000 acres). Conditions are expected to worsen with a southerly wind change.

On Saturday morning, the first of thousands of rescued residents and holiday-makers, who were stranded on a beach in Mallacoota due to raging bushfires, docked near Melbourne after a 20-hour journey by ship.

Around 4,000 people escaped to the waterfront on New Year's Eve as fires ripped through the southeastern town.

"For someone who's never been in a fire, it's very, very, frightening. I'm so happy to be here," said 16-year-old Emily Wellington from Melbourne who had visited Mallacoota for a two-week holiday with family friends.

Australia's summer bushfire crisis has already destroyed about five million hectares of land and destroyed or damaged more than 1,400 homes.

A torrential downpour along Australia's populous eastern coast has forced thousands to flee the worst flooding in decades. Even as the rains ease, waters may recede slowly.

Australia's largest city has been hit hard by a major outbreak of the highly contagious delta variant in recent weeks. Despite strict lockdown measures, the spread of the virus has continued.

Australia is set to declare a state of national emergency after floods on the country's east coast claimed 22 lives. The new status means flood victims can receive aid quicker.