Thousands of people have evacuated to a beach in southeast Australia as raging fires encircled communities and cut off roads. A firefighter was killed when a "fire tornado" lifted a fire truck into the air.

More than 4,000 people were trapped on a beach by advancing fires in southeast Australia on Tuesday as devastating blazes encircled the seaside town of Mallacoota, where sea or airborne evacuation was being planned.

"Mallacoota is under attack, it is pitch black and very scary," Andrew Crisp, emergency management commissioner of the state of Victoria, said. "We have 4,000 people on the beach and nearby who are protected by our firefighters."

Some people took boats out to sea for fear that the fire would move closer to the beach.

For days, authorities have been warning tens of thousands of holidaymakers to leave popular seaside towns and seek shelter elsewhere.

Victorian Premier Daniel Andrews said there were plans to evacuate those trapped on the seaside by boat. There was also concern about four missing people. "We can't confirm their whereabouts," he said.

Fires are raging across many parts of the country, and 100,000 people were evacuated from the suburbs of Melbourne on Monday.

Massive fire fronts continue to blaze across other states. Sixteen "emergency fires" were designated in New South Wales and Victoria on Tuesday. 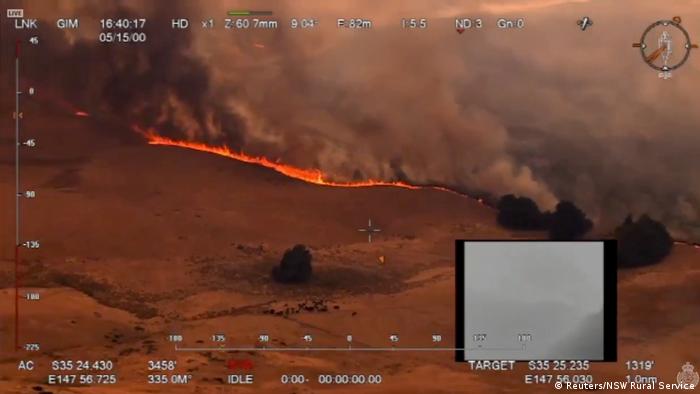 Aerial view of an approaching fire in New South Wales

In the seaside town of Batemans Bay, New South Wales, residents also fled to beaches for safety as fires encroached upon the town.

Authorities have not yet confirmed whether buildings have been affected, but Youtuber Chloe Morello, a resident of the town, tweeted "We lost our home" after documenting herself fleeing from her house.

Three people have been confirmed dead in small towns in New South Wales.

"These fires moved quickly this morning," the New South Wales Rural Fire Service said in a warning to residents. "They pose a serious threat to life. Do not be in their path. Avoid bushland areas. If the path is clear, move to larger towns or beaches to take shelter."

Police were checking drivers' licenses for people entering and exiting the areas affected by fires, redirecting those who were not residents.

The fire service tweeted a warning about a fire in Shoalhaven, New South Wales.

Firefighter Samuel McPaul became the 12th confirmed fatality since the fires broke out weeks ago. His 12-ton fire truck was lifted into the air and spun around in a "truly horrific" incident on Monday.

"It was a fire tornado or a collapsed pyro convective column that had formed above the main fire front. That resulted in cyclonic winds that moved across the fireground," Rural Fire Service Commissioner Shane Fitzsimmons said. 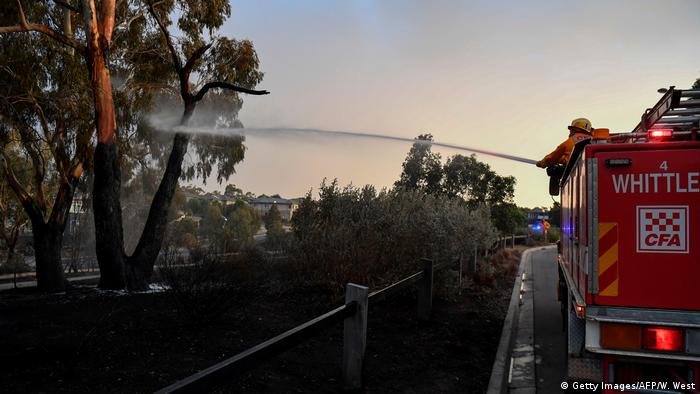 Two other firefighters in the truck were seriously burned and are being treated in hospital.

The "freakish" weather incident resulted in the fire truck being lifted and dumped on its roof.

Over 34,000 square kilometers (13,100 square miles) of land have been razed since the fires began in October and more than 1,000 homes have been destroyed.

Conditions are expected to worsen with high temperatures and no rain in the forecast.
Despite major criticism, Sydney's environmentally impactful New Year's Eve firework display went ahead on Tuesday.

Firefighters are using a brief period of cooler temperatures to establish containment lines ahead of a weekend heatwave. Sydney's water supply is threatened by two fires. (27.12.2019)

Bushfires continue to burn in several regions of Australia amid unusually high temperatures. More than 800 homes have been destroyed by blazes in the past few months, and nine people have been killed. (21.12.2019)

As a record-breaking heat wave and strong winds stoke bushfires across eastern Australia, the government has enacted new measures to contain the flames. Firefighting officials have described "dangerous circumstances." (19.12.2019)

Koalas eat toxic leaves but humans are their biggest threat 30.09.2022