The Australian government has listed the koala as endangered in huge swaths of the country, upping its conservation status from vulnerable. 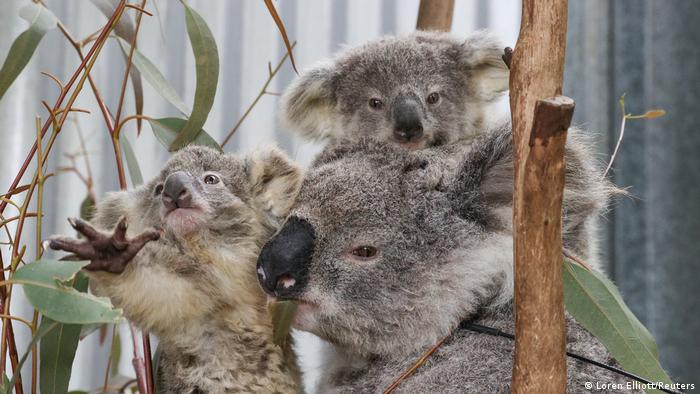 Australian Environment Minister Sue Ley on Friday announced that the conservation status of koalas was being raised to endangered across much of the east of the country.

Devastating bushfires have exacerbated an already bleak situation, with animal numbers already plunging due to habitat loss through land-clearing, as well as drought and disease.

What does the status change mean?

Ley said the latest change would boost protection for the marsupials under the Environment Protection and Biodiversity Conservation Act.

"The new listing highlights the challenges the species is facing and ensures that all assessments under the act will be considered not only in terms of their local impacts but with regard to the wider koala population."

The new conservation status underlines a swift decline in numbers. It was only in 2012 that the animal — a globally recognized symbol of Australia and its unique wildlife — was deemed to be vulnerable.

Estimates by an independent government advisory body — the Threatened Species Scientific Committee — show koala numbers having slumped from 185,000 in 2001 to 92,000 in 2021.

The change in status applies in New South Wales, Queensland, and the Australian Capital Territory.

Three environmental organizations — the World Wide Fund For Nature, the International Fund for Animal Welfare, and the Humane Society International — submitted a joint nomination for the upgrade.

WWF Australia welcomed the news, saying that koalas and their forest homes should be provided with greater legal protection as a result.

"This is a bittersweet outcome, but a critical step towards reversing the decline of koala populations," the organization said.

"This decision is a double-edged sword and we should never have allowed it to get to this point."

The Australian Koala Foundation (AKF) in September said the koala population was in rapid decline, with a 30% drop in numbers nationwide over three years.

Figures from New South Wales were the worst, with a 41% decline. But a decline was noted across all parts of Australia, with no upward trends in that time.

Devastating bushfires in 2019 and 2020 were thought to have seriously contributed to the fall in numbers, though drought and heatwaves were also to blame.

Chlamydia, a sexually transmitted disease that can be debilitating and lead to infertility, has also spread widely among Australian koalas, affecting half the animals in some areas.

Triumph the koala was rescued with only three legs. Now, he climbs and runs with his new prosthetic foot and is "exhausted" from all the attention it is bringing him.

Australia is grappling with its worst bushfire season to date. The nation has been forced to reckon with a rising death toll, mass evacuations and suffering animal populations.