Armenia PM calls for Russian troops on border with Azerbaijan

Armenia has previously accused Azerbaijan of making incursions into its territory, and is looking to Moscow for help in securing its side of the border. 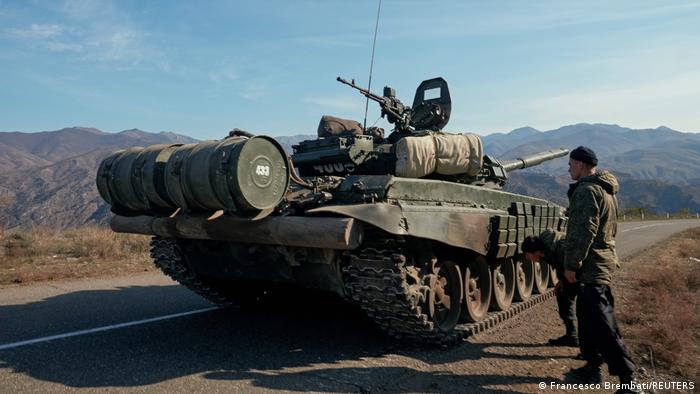 Russian peacekeepers have been deployed to monitor Nagorno-Karabakh

The request comes after three Armenian soldiers were killed in cross-border fighting with Azerbaijani forces on Wednesday, with both countries later agreeing to a ceasefire proposal from Russia.

Soldiers from both Armenia and Azerbaijan were wounded in the clashes.

Why does Pashinyan want Russia involved?

"I think it makes sense to consider the question of stationing outposts of Russian border guards along the entire stretch of the Armenian-Azerbaijani border," Pashinyan told Cabinet members.

The Armenia leader believes the deployment of Russian forces will help the two countries "carry out work on demarcation and delimitation of the border without the risk of military clashes."

"We are planning to discuss the matter with our Russian colleagues," Pashinyan added.

The Kremlin has not yet agreed to the border proposal, but spokesperson Dmitri Peskov said discussions with Yerevan would continue on the matter.

Armenia has also previously accused Azerbaijani troops of making incursions into its territory in May. Baku denies the claims.

Tensions have escalated between the countries after they fought a six-week war over the breakaway region of Nagorno-Karabakh last year, which killed around 6,500 people.

Pashinyan signed a Moscow-brokered truce in November to end the fighting, which gave parts of the enclave to Azerbaijan. Many Armenians regarded the move as capitulation by Pashinyan, yet the Armenian prime minister managed to secure another term during parliamentary elections in June.

Russia has deployed thousands of peacekeepers to monitor potential hostilities in Nagorno-Karabakh.

Russia is a key partner of Armenia, with both countries being members of the Collective Security Treaty Organization (CSTO) military alliance.