Armenia accuses Azerbaijan of failing to withdraw from its territory

Tensions between the countries are simmering again after they fought a war last year over the breakaway region of Nagorno-Karabakh. Azerbaijan denies the new allegations from Armenia. 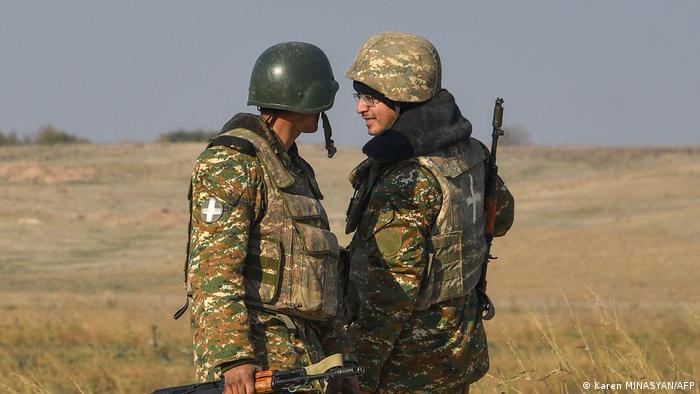 Armenia said on Friday that Azerbaijan had failed to withdraw troops that had crossed the border in a disputed incident from the day before.

The latest tensions come after both countries last month accused the other of opening fire in Karabakh and their shared border. Last year, the two countries fought a brief war over the breakaway region of Nagorno-Karabakh.

The border incident this week underlined the fragility of a Russian-brokered ceasefire six months ago that halted the worst fighting in decades between Azerbaijani and ethnic Armenian forces.

Protests erupt in Armenia over peace deal with Azerbaijan

Azerbaijan's Foreign Ministry said the leadership of its border guards had met with the Armenian side on Friday to discuss tensions at the border. It gave few further details.

While such a meeting would not be extraordinary, as border guards from the two sides met as recently as Wednesday, it would be a sign that communications remain open.

US, Russia urge an end to provocation

The United States has urged Azerbaijan to withdraw its troops immediately.

"We expect Azerbaijan to pull back all forces immediately and cease further provocation," she told reporters.

Armenia earlier Friday appealed to Russia for military support, and also said that France was considering putting the issue on the agenda of the UN Security Council.

The Kremlin said that Russian President Vladimir Putin was calling on both countries to respect peace agreements, adding that Russia would continue "active mediation efforts". "The Armenian side expressed extreme concern over the situation at the border,"

Emmanuel Macron, France's president, called on the United Nations Security Council to resolve the matter, and urged Azerbaijan to withdraw its troops from Armenian territory.

The United States, which along with France is part of the Minsk Group brokering diplomatic talks on Nagorno-Karabakh, said that it was "closely following" the recent tensions.

How is Azerbaijan responding?

Meanwhile, Azerbaijan said that Pashinyan's claims were provocative and that Armenia's border troops were "taking positions that belong to Azerbaijan" in the Lachin and Kalbajar districts.

Armenia had handed these districts over to Azerbaijan last year as part of a ceasefire agreement.

"Azerbaijan is committed to defusing the tensions in the region and urges to take steps in that direction," said the country's foreign ministry. The country dismissed the accusations and said that it was enforcing its own border.

It said that Armenia's reaction to the development was "inadequate" and "provocative."

Pashinyan claimed Azerbaijani forces advanced 3 kilometers (2 miles) into southern Armenia in an act of "infiltration." He said that Armenia's soldiers had responded with an "appropriate tactical maneuver."

"It is an encroachment on the sovereign territory of Armenia," Pashinyan said. "This is an act of subversive infiltration."

Armenia's prosecutor general has reportedly opened a criminal case into this "infringement" of territorial integrity by Azerbaijan.

Armenia's leader accused Azerbaijan of attempting to "lay siege" to Sev Lich lake, which is divided between the two countries.

A look at the Armenian genocide