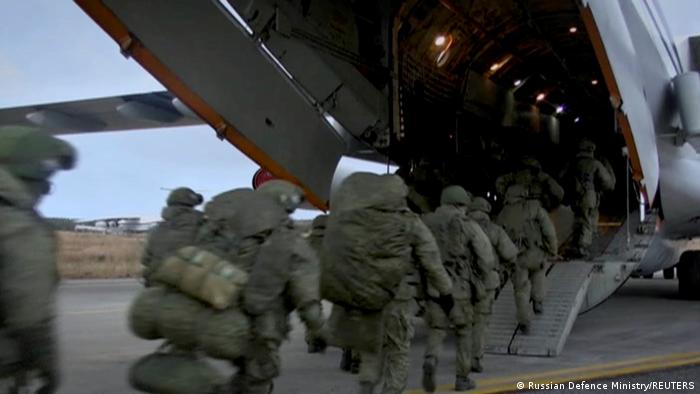 Russia began deploying 2,000 peacekeepers to the disputed region of Nagorno-Karabakh on Tuesday, after Armenia and Azerbaijan signed a pact to end fighting over the region.

Russia intends to send 1,960 peacekeepers, 90 armored personnel carriers and 380 vehicles to the mountainous region, where Azerbaijan has had major territorial gains in vicious fighting over the past month and a half.

The agreement spurred celebrations in Azerbaijan but fury in Armenia, where demonstrators took to the streets and stormed government buildings to denounce their leaders for losses in the territory, which broke from Azerbaijan during a war in the early 1990s.

After the ceasefire, Azerbaijan will retain control over areas seized in the fighting, including the key town of Shusha, while Armenia agreed to a time frame to withdraw from large parts of the region.

Armenian Prime Minister Nikol Pashinyan called the agreement as "unspeakably painful for me and for our people," while Azerbaijani President Ilham Aliyev said it amounted to a "capitulation" by Armenia.

Meanwhile, Turkish President Recep Tayyip Erdogan said Ankara and Moscow would together supervise the ceasefire at a "joint center to be designated by Azerbaijan in its lands saved from Armenia's occupation."

'Calm is being maintained'

The deal came after Russia's military revealed on Monday that one of its attack helicopters had been shot down in Armenian territory near the border with Azerbaijan, leaving two crew members dead. Azerbaijan's military accept responsibility for the incident and apologized to Russia.

Russia has maintained close ties with both Armenia and Azerbaijan since the end of the Soviet era. Upholding the ceasefire deal, Armenia reported that "relative calm is being maintained from 6 am GMT," according to a statement made by the Armenian military.

"Active combat operations on the whole front line are suspended," the statement said.

Fresh fighting over the territory erupted in late September. More than 1,400 people have been confirmed killed, including dozens of civilians, but the death toll is believe to be significantly higher.

UN chief Antonio Guterres' spokesman Stephane Dujarric has said "the secretary general is relieved that the deal has been agreed to a cessation of hostilities."

"We are very grateful to Russian authorities for what they have done," said Dujarric. "The sense of relief is really about the hope that this will end the suffering of civilians."