Authorities in Nagorno-Karabakh have said Azerbaijan attacked residential areas in two of their largest cities with rockets and artillery shells. Azerbaijan has denied targeting civilian areas. 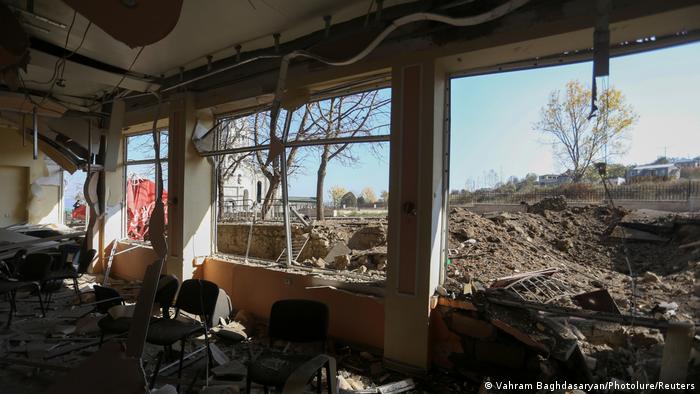 At least three civilians in Nagorno-Karabakh's largest city were killed during overnight shelling by Azeri forces as Baku pushed its offensive to gain control over separatist territory for a sixth week.

Local authorities said a woman and her two grandchildren died in the same house in the regional capital, Stepanakert, after rockets and artillery shells hit residential areas.

The strategic city of Shushi, 15 kilometers (9 miles) to the south of Stepanakert and the enclave's second-largest city was also attacked overnight. Several houses were on fire, the territory's Emergency and Rescue Service reported.

"The Azerbaijani-Turkish forces opened intense gunfire at the town of Shushi and the city of Stepanakert during the entire night," Armenian state news agency Armenpress reported.

Independent observers said fighting appeared to be moving deeper into the mountainous enclave.

Azerbaijan's Defense Ministry has denied the reports of targeting civilian areas, calling the allegations "misinformation." Azerbaijan has accused Armenia of targeting the city of Terter and nearby villages in Azerbaijan.

At least 1,000 people have died in and around Nagorno-Karabakh, an enclave internationally recognized as part of Azerbaijan but populated and controlled by ethnic Armenians backed by Armenia since a war ended there in 1994. The latest outbreak of conflict began on September 27.

According to Nagorno-Karabakh officials, 1,177 of their troops and 50 civilians have been killed. Baku has reported at least 92 civilian deaths and more than 400 wounded.

According to the UN children's agency UNICEF, over 130,000 residents have been displaced since fighting escalated.

The conflict, which also threatens the security of Azeri oil and gas pipelines, has continued despite two Russia-brokered cease-fires and a US-negotiated truce failing instantly after it took effect.

A week ago, France, Russia and the United States called on Armenia and Azerbaijan to make a mutual agreement not to target residential areas, but the accord failed within hours.

Azerbaijani President Ilham Aliyev has said that Armenian forces must withdraw from Nagorno-Karabakh for the conflict to end.