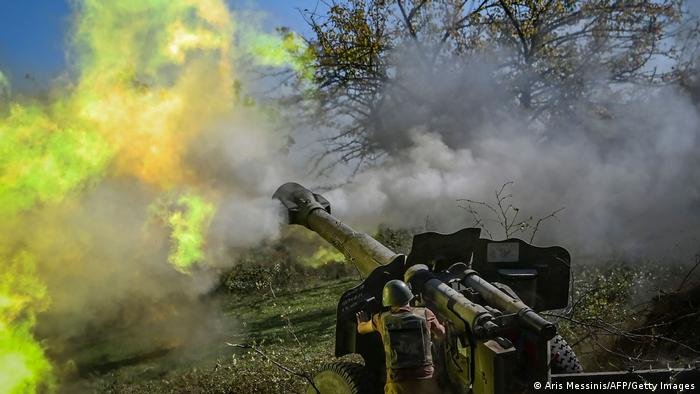 Top diplomats from Azerbaijan and Armenia began fresh peace talks in Geneva on Friday to try to resolve the conflict over Nagorno-Karabakh, the Armenian Foreign Ministry said in a statement.

The ministers are meeting envoys from France, Russia and the United States, co-chairs of the Organization for Security and Cooperation in Europe (OSCE) Minsk Group.

The mediation team was created to end the longstanding conflict over the territory that is internationally recognized as part of Azerbaijan but is ruled by ethnic Armenians.

What is the latest on the fighting?

The regions to which he referred are in the southern part of the conflict zone, close to the border with Iran.

Nagorno-Karabakh's Defense Ministry, meanwhile, said it had thwarted Azeri offensives and that shelling of residential areas of towns in the enclave had resumed. It also said it had captured a fighter from Syria.

Human rights groups have warned about the use of cluster munitions during the conflict, including an attack on the Azeri city of Barda on Wednesday which killed more than 20 people.

Rights group Amnesty International and New York-based Human Rights Watch (HRW) called for an immediate halt to the use of banned weapons.

What is the Nagorno-Karabakh conflict?

The two neighbors have been locked in a bitter dispute since Armenian separatists backed by Yerevan seized control of the mountainous province in a 1990s war that left 30,000 people dead.

The bloodiest clashes in years flared-up again on September 27 and more than a thousand people have been killed.

Three previous ceasefire agreements brokered by Russia and the United States in recent weeks have failed.

What's standing in the way of peace?

Aliyev has rejected any solution that would leave Armenians in control of territory claimed by both countries as part of their historic homeland.

Meanwhile, in comments published on the prime ministerial web site, Armenian Prime Minister Nikol Pashinyan, responding to questions from foreign media, said he believed "the principle of 'remedial secession' should be applied" to the disputed region.

Remedial secession refers to the secession of a subgroup from its parent state as a remedy of last resort.