Civilians suffer amid Nagorno-Karabakh conflict | Europe | News and current affairs from around the continent | DW | 26.10.2020 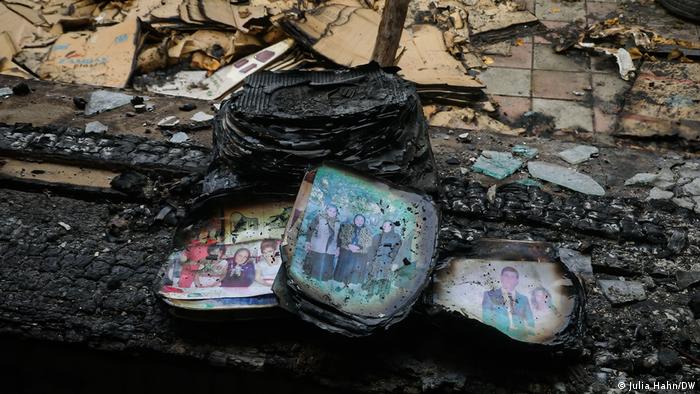 In early October, a missile struck Ilgar Farzaliyev's home. The ensuing fire burned his house to the ground, and with it went most of his possessions. His silverware, glasses, family photos and much else — gone forever.

Standing in what was once the entrance hall, Farzaliyev glances around the ruins of his former home, where he had lived for 35 years. 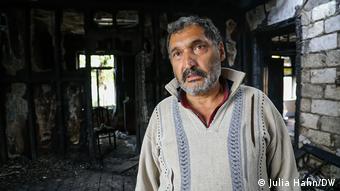 ''The whole family was sitting here, watching TV. Suddenly there was an explosion in the backyard and everything started burning,'' he says, recalling the fateful day. ''We ran outside and called the firefighters, but when they arrived it was already too late.''

Farzaliyev lives in Barda, a small town in Azerbaijan some 20 kilometers (12.5 miles) from the Nagorno-Karabakh front line. He is convinced Armenian forces are responsible for the destruction of his house, and says there have been many Armenian attacks on civilian targets in the surrounding area in recent weeks. This claim, however, is impossible to independently verify at this stage.

Fighting broke out between Armenia and Azerbaijan over the disputed Nagorno-Karabakh region in late September, reigniting a decades-old conflict. While Nagorno-Karabakh is part of Azerbaijan under international law, it is under de facto administration by Armenian separatists. Both sides have accused each other of escalating tensions and targeting civilians. Both also claim to be making military advances. 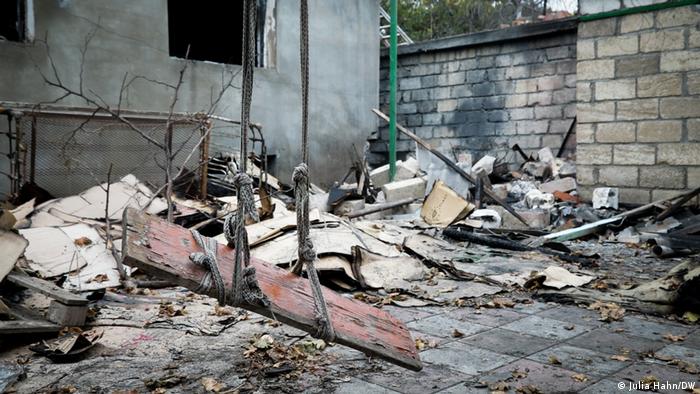 Two Russian-brokered cease-fires have failed. A third, mediated by the United States in recent days, has already been broken. Now, after one month of fighting, at least 100 civilians have already been killed. Armenia reports that 970 of its soldiers have died so far, while Azerbaijan has so far reported no official military death toll.

Both Armenia and Azerbaijan have been at pains to convince the public they are justified in their fight and have been disseminating their respective version of events on social media and television.

Human rights organizations say Azerbaijan, which is governed by authoritarian President Ilham Aliyev, stifles free speech. Martial law has been in place since late September: Citizens face a curfew between 9 p.m. and 6 a.m., and internet access is heavily regulated and censored. Social media platforms like Twitter, Facebook and various messaging services have been blocked. Propaganda and warlike slogans are omnipresent. Azerbaijani authorities restrict the free movement of foreign journalists wishing to cover the conflict, which means journalists only see what they are supposed to see.

Today, this means a visit to a junior high school in Barda that was transformed into a temporary refugee shelter when fighting erupted one month ago. Now almost 100 families live here. Most of them are originally from the nearby town of Tartar on the Nagorno-Karabakh front line, where Armenian and Azerbaijan artillery units have been shelling each other for weeks. Most Tartar residents fled when fighting began, though a small number have chosen to stay behind and hunker down in their cellars.

The heavy thud of artillery fire can be heard all the way over at the Barda school. At the entrance to the building, children have laid red carnations before a black-and-white picture there. It's a memorial to an Azerbaijani soldier who was killed almost three decades ago in fighting over Nagorno-Karabakh.

The Nagorno-Karabakh conflict dates back to the collapse of the Soviet Union, when Azerbaijan lost control over the region. In 1994, Azerbaijan and Armenia agreed to a truce brokered by the Organization for Security and Cooperation in Europe (OSCE) under the leadership of France, the United States and Russia. The deal did not, however, provide a long-term solution for the territorial dispute and the conflict has continued to linger.

Everyone at the school in Barda is convinced that Azerbaijan is on the right side of history. The deputy director of the school, Musella Musayeva, is also of this view. She does not believe that her country's forces are attacking Armenian civilians, that they are also being killed and driven out of their homes.

''I don't know much about what's happening on the Armenian side. I only know what I see on TV here,'' she says. ''But I can say that the Armenians are losing and must retreat. They don't have any other options. We are not trying to take Armenian territory — we are fighting for what belongs to us." 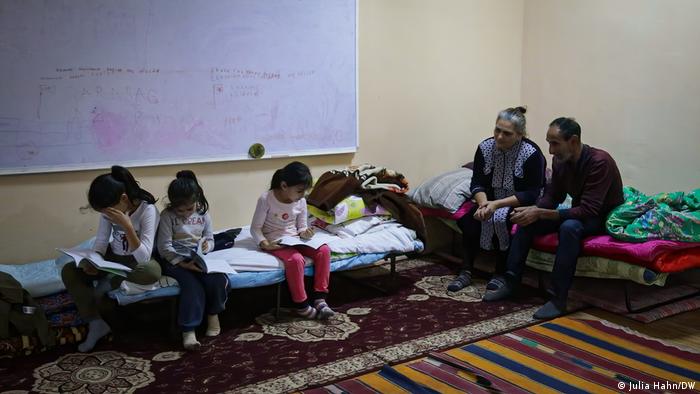 Zabil Aliyev (right) wishes his granddaughters could go back to school

Will refugees be able to return home?

Zabil Aliyev sees things much the same way. He took refuge at the Barda school several weeks ago with his wife, Nahide, and three granddaughters. The five, who are also originally from Tartar, have taken shelter in a former classroom. Cups and plates cover the school tables, and a gas cooker sits on the floor.

''I am worried about the girls, they are just kids. They were so scared of the fighting,'' Aliyev says as he sits on a camp bed watching the children. ''How are they supposed to know what explosions are? They should go to school and study. But they shouldn't have to learn what bombs and missiles sound like."

Aliyev doubts cease-fire agreements and diplomatic talks will lead anywhere. His namesake, Azerbaijan's president, is relying on his army's advances — diplomacy or no diplomacy. ''Nobody can break our resolve,'' President Ilham Aliyev recently told senior military figures in a televised situation report. He added that the enemy would be driven back until Nagorno-Karabakh is retaken.

Nobody can foresee what price Armenian and Azerbaijan civilians will have to pay for the ongoing hostilities. And as for the refugees at the Barda school — will they be able to return home, or will it become too dangerous even where they have found temporary shelter?