Leaders of the three countries have signed an agreement to end the the war over the disputed region of Nagorno-Karabakh. The pact is expected to take effect on Tuesday. 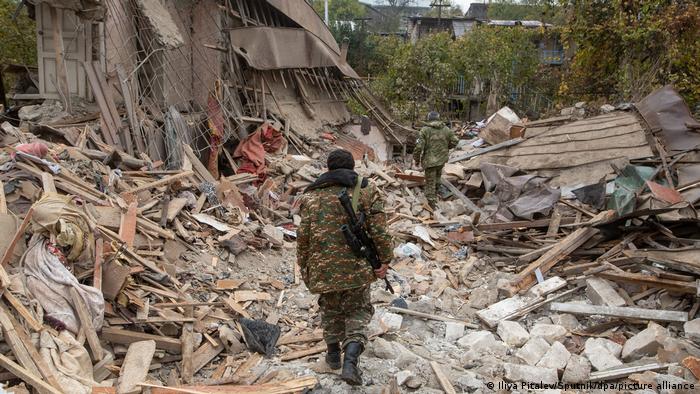 Armenia, Azerbaijan and Russia on Tuesday said they have signed a deal to end the military conflict over the disputed region of Nagorno-Karabakh.

"I have signed a statement with the presidents of Russia and Azerbaijan on the termination of the Karabakh war," Armenian Prime Minister Nikol Pashinyan said in a statement posted to his Facebook page. He also called the move "unspeakably painful for me personally and for our people."

"The signed trilateral statement will become a [crucial] point in the settlement of the conflict," he said later in a televised online meeting with Russian President Vladimir Putin.

"We believe that the achieved agreements will create the necessary conditions for a long-term and full-fledged settlement of the crisis around Nagorno-Karabakh on a fair basis and in the interests of the Armenian and Azerbaijani people," Putin said.

The Russian president added that the two sides were already engaged in the exchange of prisoners of war and bodies. The pact also includes a "total ceasefire" beginning from midnight on Tuesday Moscow time (21:00 UTC)

Araiyak Harutyunyan, the leader of the Nagorno-Karabakh region, said on Facebook that he agreed "to end the war as soon as possible."

"The brotherly Azerbaijan has achieved an important gain on the battleground and table. I sincerely congratulate this sacred success," Turkey's Foreign Minister Mevlut Cavusoglu said on Twitter. "We will continue to be one nation, one spirit with our
Azeri brothers."

'An era of national unity'

The declaration followed six weeks of heavy fighting and advancement by Azerbaijani forces. Azerbaijan said on Monday it had seized dozens more settlements in Nagorno-Karabakh, a day after declaring victory in the battle for its second-largest city.

"The decision is made basing on the deep analyses of the combat situation and in discussion with best experts of the field," said Pashinyan. "This is not a victory but there is not defeat until you consider yourself defeated. We will never consider ourselves defeated and this shall become a new start of an era of our national unity and rebirth."

He later said he had signed the deal on the insistence of the Armenian army.

Read more: Russia to 'assist' Armenia if conflict with Azerbaijan spreads beyond Nagorno-Karabakh

Azerbaijan says it has retaken much of the land in and around Nagorno-Karabakh, which it lost in a 1991-94 war that killed an estimated 30,000 people and forced many more from their homes. Several thousand people are feared killed in the conflict, and three ceasefires have failed in the past six weeks.