The president of Azerbaijan has said his troops have captured the strategically important city of Shushi — a claim refuted by Armenia. At least 1,000 people have died in Nagorno-Karabakh since fighting broke out. 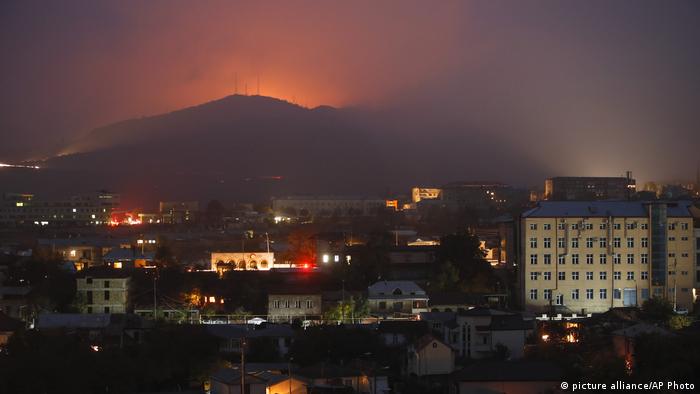 Azerbaijan has seized control of Shushi in Nagorno-Karabakh, according to the country's president on Sunday, after six weeks of fighting with Armenia.

Armenian officials denied Shushi had been captured, however, insisting fighting is still ongoing over the strategically key city in the region.

In a televised address to the nation, Azerbaijani President Ilham Aliyev said troops had taken control and that: "Shusha is ours. Karabakh is ours,'' using the Azerbaijani version of the city's name.

"(This day) will become a great day in the history of Azerbaijan," Aliyev said.

Armenia: The fight is not over

In the aftermath of Aliyev's comments, Armenian Defense Ministry spokesman Artsrun Ovannisian took to Facebook and said that "fighting in Shushi is continuing. Wait and believe in our troops."

Shushi is of significance because it lies about 10 kilometers (6 miles) south of the region's capital — Stepanakert — and is situated along the main road connecting Nagorno-Karabakh with Armenia.

The landlocked disputed territory of Nagorno-Karabakh is within Azerbaijan but has been under the control of local ethnic Armenian forces since 1994.

The latest outbreak of conflict, which has left at least 1,000 dead, began on September 27.

Azerbaijan's chief ally Turkey welcomed the development. "The joy of our Azerbaijani brothers who liberated their occupied cities and Karabakh step by step is also our joy,'' Turkish President Recep Tayyip Erdogan said at a rally in the northwestern city of Kocaeli.

Meanwhile, locals in Baku took to the streets to celebrate the capture of Shushi, waving flags and chanting slogans, while drivers sounded their car horns.

Authorities in Nagorno-Karabakh have said Azerbaijan attacked residential areas in two of their largest cities with rockets and artillery shells. Azerbaijan has denied targeting civilian areas.