Armenia-Azerbaijan prisoner swap begins | News and current affairs from Germany and around the world | DW | 14.12.2020

The neighboring countries are allowing prisoners from each side return home as part of an "all for all" deal. The prisoners were taken during intense fighting over the contested Nagorno-Karabakh region. 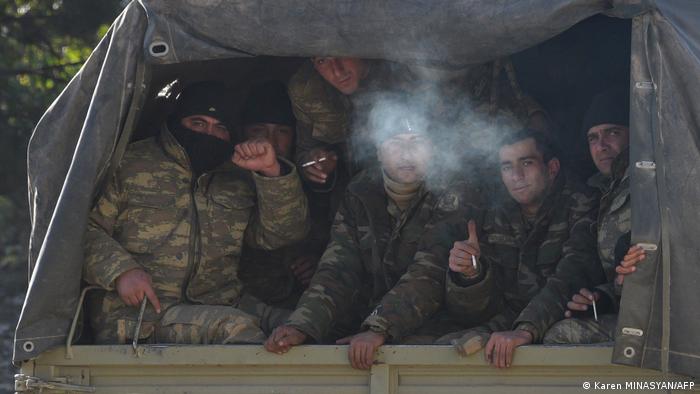 A prisoner-swap between neighbors Armenia and Azerbaijan kicked off on Monday, Azerbaijan has confirmed.

The exchange began a just about a month after a Russian-brokered cease-fire began, following deadly clashes that broke out in late September over the contested Nagorno-Karabakh region.

Officials in Azerbaijan's capital city Baku listed two prisoners who had been returned to Azerbaijan.

Returns began under an "agreement... on the exchange of prisoners and hostages on an 'all for all' basis," according to Azerbaijan's State Commission on Prisoners of War, Hostages and Missing Persons in a statement on Monday.

It is not known how many prisoners will be exchanged in total.

Armenia has recently accused Azerbaijan of delaying the start of the transfer.

What is going on between Armenia and Azerbaijan?

The Caucasus countries have for decades been engaged in a simmering conflict over Nagorno-Karabakh.The enclave is inhabited largely by ethnic Armenians but is officially part of Azerbaijan. It broke away from Baku in a 1990s war which claimed some 30,000 lives.

The fighting that broke out in September has seen the heaviest clashes since a 1994 truce. Around 5,000 people were killed on both sides during this six-week conflict.

A cease-fire was eventually brokered by Russia on November 10.

It prompted protests in Armenia calling for Prime Minister Nikola Pashinyan to step down. Pashinyan described the deal as necessary to prevent Baku from taking over the whole of Nagorno-Karabakh.

But the deal has not entirely put an end to the violence: both countries have accused the other of violating the cease-fire.

Russia, which has deployed peacekeepers to Nagorno-Karabakh to monitor the peace accord, has confirmed this.

Azerbaijani President Ilham Aliyev warned that Armenia ''shouldn't try to start it all over again.''