Armenians in Nagorno-Karabakh left upended by peace deal | Europe | News and current affairs from around the continent | DW | 22.11.2020 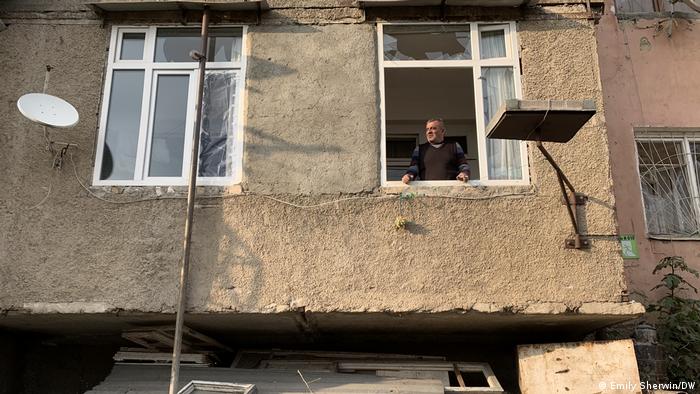 Vachagan Melkumyan's apartment no longer has any windows. Only a few shards of glass remain. He's using a knife to remove them, working diligently, before carefully taping sheets of plastic to the white frames. The 65-year-old wants the apartment in Stepanakert, the biggest city in Nagorno-Karabakh, to be safe when his family comes home.

Vachagan leans out of the window looking at a mountain range in the distance. He says that is where the bombs came from during the recent fighting. He explains that he and his neighbors lived in the basement of the building for around 25 days, sheltering from the explosions.

For six weeks, Armenia and Azerbaijan fought a fierce war on his doorstep over disputed territories in and around the breakaway enclave of Nagorno-Karabakh, which is inhabited mostly by ethnic Armenians. On November 10, a peace deal brokered by Russia handed several regions to Azerbaijan: a chunk of Nagorno-Karabakh itself and three territories around it. The region was already considered part of Azerbaijan under international law but has been under de-facto Armenian control since fighting in the 1990s, after the collapse of the Soviet Union.

"Last time we had machine gun fire back and forth," Vachagan says. "This time it was really scary weapons." Outside, the metal fins from the back of a rocket lie on the ground in between glistening pieces of glass.

"My wife, my kids, grandchildren and great grandchildren will live here. We'll take things as they come," he says with a small shrug, gesturing into his home. "We have to start over now. But we're going to do our best to live well."

But as demarcation lines in the region shift, not everyone knows where home is anymore. Every day now, hundreds of people arrive in the center of Stepanakert in buses. Many of them have fled the territories now being handed over to Azerbaijan. Stepanakert's mayor, David Sarkisyan, tells us he expects as many as 25,000 people to arrive in the coming days and weeks. Stepanakert currently has a population of just over 50,000 people.

"I have prepared several big hotels — so that people can live there for now, while we start building more houses." Sarkisyan believes the city will also have to send some people on to villages in the surrounding area in order to cope with the influx.

According to the Armenian government, around 90,000 ethnic Armenians from Nagorno-Karabakh were displaced by the recent war and temporarily fled to Armenia. On the Azeri side, officials say the conflict displaced around 40,000 people. 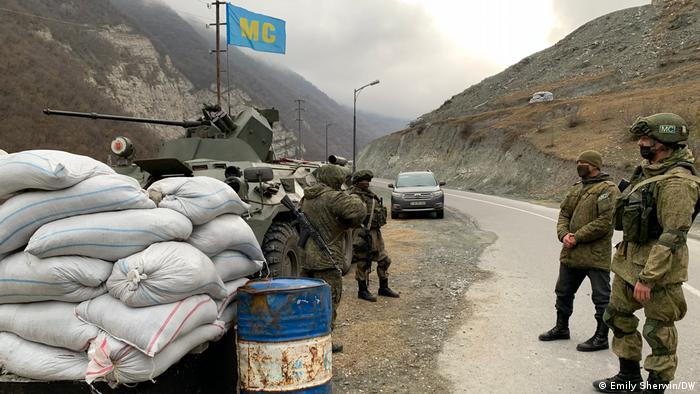 Russian peacekeepers have been deployed to the region

On Stepanakert's main square, Anahit Grigoryan and her elderly mother Arega have just gotten off one of the buses from Yerevan. They lived in refugee housing for one-and-a-half months. Now they stand in between plastic holdalls of belongings, as the Russian peacekeepers stationed in the city look on.

Anahit rubs her forehead in despair as she looks around. "We don't know what we will do and where we will live," she says, explaining that staying as guests with local relatives is not a long-term solution.

Before, the two women lived in Shushi, a nearby city, which is called Shusha in Azeri. The town is located on a hill, which made it a decisive military prize in the recent war and in the previous one 30 years ago. Last time, it was the Azeris who had to flee the city. Now fates have been reversed. 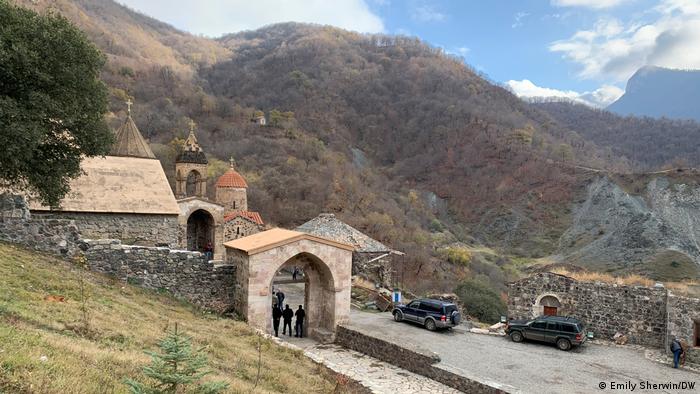 With the Dadivank Monastery now in Azeri-controlled territory, its unclear how worshippers will reach it from Armenia

A heavy peace to bear

"I left everything behind in Shushi, a two-bedroom apartment with everything in it, all done up, " Arega Grigoryan says as her daughter looks on. She says she has been wearing the same clothing for over a month. After a pause, her indignation suddenly prompts an outburst of broader political anger. "I hope Pashinyan dies like a dog!" she says of the Armenian prime minister.

Many across the region and in Armenia itself share this anger at Nikol Pashinyan. For days, there have been protests calling for him to resign. In the capital, Yerevan, protesters chant "Pashinyan — traitor!" and boo at the mention of his name. Many see Nagorno-Karabakh as a rightful part of Armenia. And many in the breakaway region say Pashinyan sold off part of their homeland by signing the recent peace agreement.

Thick fog can settle at a moment's notice in the mountains of Nagorno-Karabakh. The contrast between the picturesque natural beauty of the landscape and the traces of the recent violence is harrowing. Roads across the region are littered with burnt-out cars and drivers steer around potholes left by bombing. The huge shaft of a rocket jaggedly sticks out of the street in the north of the disputed territory.

And the uncertainty hangs as thick as the fog here. In many villages, people tell us they aren't quite sure where the lines of Armenian-controlled areas will ultimately be drawn, and which side of the conflict their homes will end up on.

In the Kalbajar District, not even the Dadivank Monastery's medieval stone walls feel like a sure thing. The district will be under Azeri control from November 25. Though the monastery itself is under the protection of peacekeepers now, and Azerbaijan's president, Ilham Aliyev, has vowed to protect Christian churches in the region, it's unclear how worshippers will be able to reach the holy site from Armenia. The fate of the road leading here is still being negotiated, a priest at the monastery tells us. For days, Armenians have been coming to say goodbye. People stand in stillness, staring blankly as they take pictures outside the stone arches.

Ahead of the district's handover, the area surrounding Dadivank monastery is now almost deserted. Many Armenians fleeing the Kalbajar district have been setting their own houses on fire as they go, saying they don't want to leave anything behind. It's a dramatic act of willful destruction that perhaps allows people to feel a sense of control over their home.

But just beneath the veneer of that defiance, there is often not just grief, but desperation. In the nearby village of Verin Khoratak, Sergei Arakelyan shows us his empty concrete house. His furniture is already in Yerevan. He has decided to leave, even though his particular village will remain Armenian. A tattoo of a Christian cross flashes on his hand as he takes drags of his cigarette. 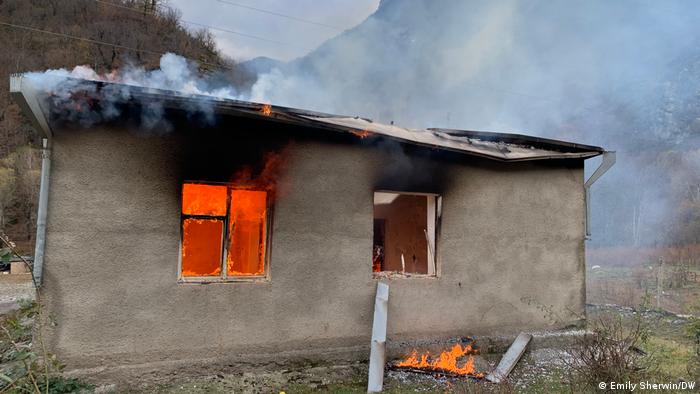 "I was born in this village, my grandfathers and great grandfathers were born here. I built a new house on top of the old foundations of my father's house," he says, adding that he built two more houses for his sons. "My hope was that this is our homeland, that we would live here. Then in one day they sold our land and the people along with it. They just gave it all away."

Repeated conflict in the region was not what drove him away, Sergei says. Instead, it was the peace deal. "That's when we realized that there was no life here. Until then we hoped there was."