Armenians call Nagorno-Karabakh cease-fire a ′capitulation′ | Europe | News and current affairs from around the continent | DW | 11.11.2020

Protests have broken out in Yerevan after a Russian-brokered peace deal was signed by Armenia and Azerbaijan. Many Armenians want the prime minister's resignation for agreeing to a cease-fire agreement. 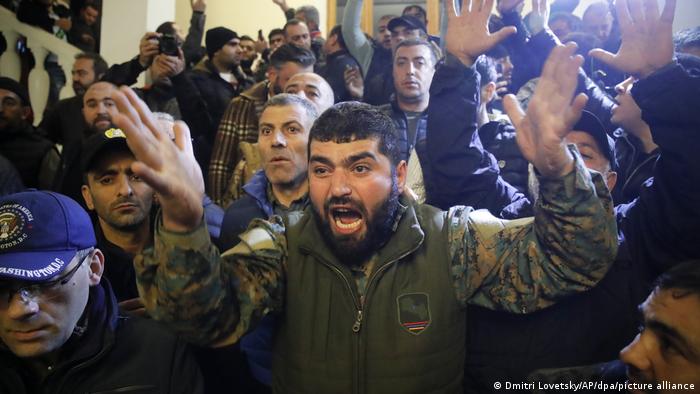 After Armenian Prime Minister Nikol Pashinyan and the presidents of Azerbaijan and Russia had signed a cease-fire agreement to bring an end to weeks of fighting in Nagorno-Karabakh, thousands of people poured out onto the streets of the Armenian capital to protest. Some demonstrators managed to force their way into a government building, occupying rooms and smashing furniture in the prime minister's office.

The situation had not calmed down by morning. Representatives of the Defense Ministry and military brass called on people to refrain from actions that would "undermine the foundations of the state" and destabilize the situation in the country. They said that "an incomparably strong and efficient army" should be built up.

Pashinyan's exact whereabouts are currently unknown, although he said live on Facebook that he had not left Yerevan. Pashinyan appeared three on Facebook live videos during the night and appealed to people to rally around the state.

However, protesters instead called for his immediate resignation and for Armenia to withdraw from the cease-fire agreement.

Some protesters managed to enter parliament and occupy the plenary hall. Armenian parliament speaker Ararat Mirzoyan was beaten up and taken to hospital, local media reported.

Read more: 'No place like home' for Nagorno-Karabakh's displaced

Many protesters said the felt Pashinyan betrayed the people who elected him two and a half years ago by signing the cease-fire agreement.

Kamo, a taxi driver from Yerevan, said he had come to parliament because "nobody expected this!" He said the young men who were fighting and dying at the front had ended up being stabbed in the back. No reasonable Armenian would have signed the document, he said, adding that he wanted Pashinyan to step down so "someone who can cleanse our people of this disgrace and humiliation could take his place."

"Apparently, everyone in this war got what they wanted," said the cameraman Levon Grigoryan. "Everyone except Armenia, which has only lost out!" 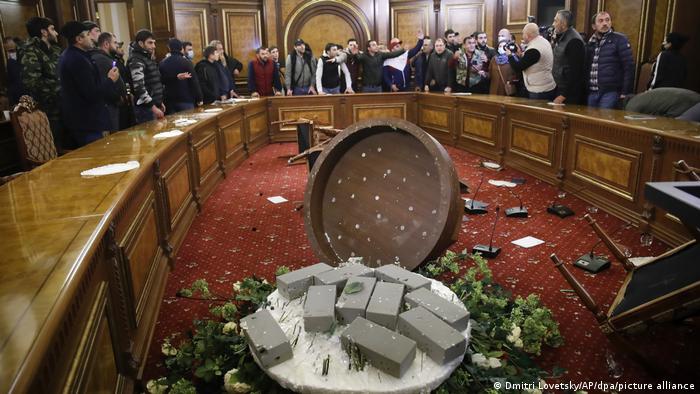 For him, Azerbaijan gained control over almost all of Nagorno-Karabakh and Turkey was happy its strategic partner had achieved its goal, and Russia was pleased that it had brought an end to the conflict. But Armenia had got an explosive peace: "Pashinyan basically signed a capitulation!"

Argishti, who also took part in the protests, agreed and said the prime minister had had no right to sign the cease-fire deal.

"In reality, he has buried our whole people's national liberation movement and scrapped all the achievements since our victory in the first Karabakh war," Argishti added.

Read more: Opinion: In the Caucasus a new war for old reasons?

Argishti said an emergency parliament meeting should demand Pashinyan's immediate removal but agreed this might not be so easy as the government still enjoys majority support. "We just have to persuade members of parliament to vote for this," he said.

But lawmakers did not hurry to parliament to remove the prime minister even though protesters promised "not to touch" them. There is currently no quorum for a vote in parliament as only lawmakers from the opposition parties Prosperous Armenia and Bright Armenia are in attendance.

Armenian political expert Manvel Gumashyan told DW that many Armenians considered the cease-fire agreement to be a capitulation. He said the deal had done significant damage to the government and the prime minister's ratings.

"The main question now is whether the opposition will be able to use this crisis and remove Pashinyan from power," he told DW, adding the most recent attempt to storm parliament would likely not be the last time the opposition tries to unseat the prime minister.