Protesters marched on Armenian parliament after Prime Minister Nikol Pashinyan agreed to a peace deal with Azerbaijan over Nagorno-Karabakh. Meanwhile, the Azeri president told soldiers that they had won in the conflict. 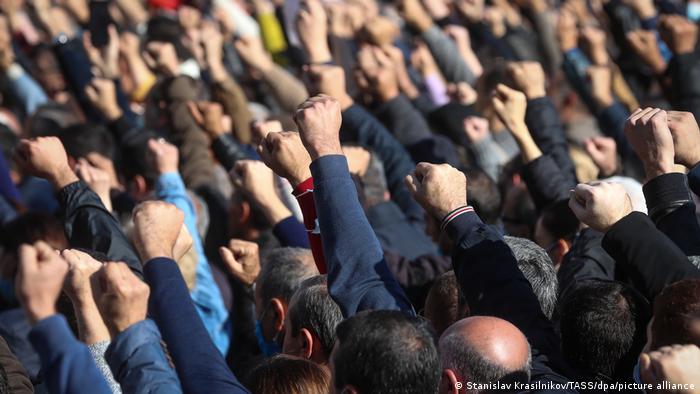 Thousands of Armenian protesters demanded Prime Minister Nikol Pashinian step down over a cease-fire deal that saw territorial concessions to Azerbaijan in the disputed Nagorno-Karabakh region.

Protesters shouted "Nikol is a traitor" in Liberty Square in central Yerevan. Several hundred demonstrators marched on parliament but were blocked by police in riot gear.

Police said that 135 people were arrested and later released. Among them was Gagik Tsarukyan, the leader of the opposition Prosperous Armenia party — the second biggest faction in Armenian parliament. 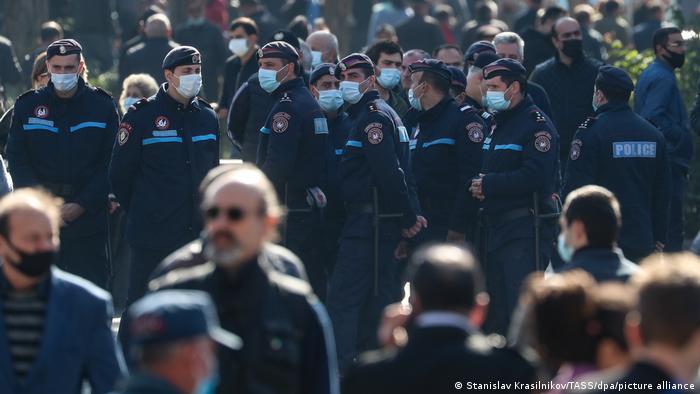 It was the second day of protests in Armenia since the Nagorno-Karabakh peace deal with Azerbaijan was reached. Protesters stormed government buildings on Tuesday demanding that parliament invalidate the agreement.

Pashinian agreed to the peace deal with Azerbaijan and regional power Russia on Tuesday. The accord ended six-week conflict in the disputed region, which is internationally recognized as part of Azerbaijan but run by Armenian inhabitants.

The fighting was the worst the area had seen since a war in the early 1990s. More than 1,400 people, including many civilians, were confirmed killed in the clashes since the end of September. However, the real death toll is believed to be much higher.

According to the cease-fire, Armenia was to cede control of several areas in the disputed region that Azerbaijan seized during the fighting. Russia, which has a defense pact with Armenia, would also send peacekeepers to stay in the region for five years.

In weeks leading up to the accord, Azerbaijan had claimed several territorial gains and separatists admitted that Armenia had risked losing control of much more territory given the pace of the conflict.

Armenian Prime Minister Nikol Pashinian said it was "extremely painful for me personally and for our people," and described the situation as a "catastrophe."

Azerbaijan President Ilham Aliyev declared victory in the Nagorno-Karabakh conflict on Wednesday at a meeting with military members.

The Russian army said that peacekeepers had arrived in Nagorno-Karabakh and were patrolling the Lachin corridor, which connects the region with Armenia.

Meanwhile, Turkey, Azerbaijan's main ally, announced an agreement with Moscow to coordinate efforts to monitor the cease-fire, which President Recep Tayyip Erdogan hailed as the end of a 28-year Armenian occupation of Azeri land.

"Turkey will take part in the joint peace force to be formed to monitor the cease-fire along with Russia," Erdogan told members of his AK Party in parliament on Wednesday. "The relevant agreement on the formation of the joint Turkish-Russian center to monitor the ceasefire was signed this morning. It will be formed on Azeri lands liberated from occupation."