Armenians torch their own homes outside Nagorno-Karabakh

Armenians have been setting their homes on fire as they flee the district of Kalbajar. Azerbaijan is set to take control of the area as of November 15 under the Nagorno-Karabakh ceasefire brokered earlier this week. 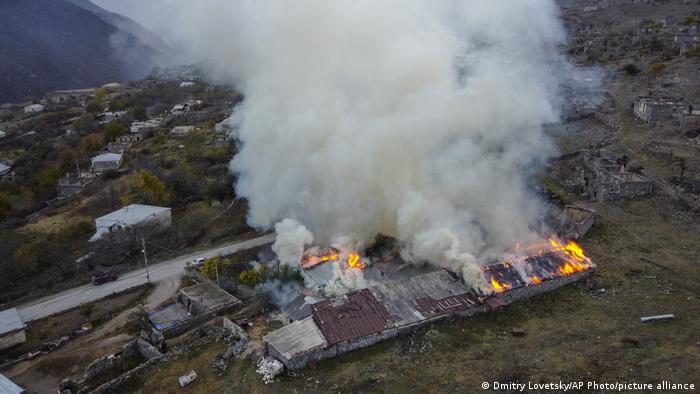 Outraged Kalbajar residents set their houses alight and fled to Armenia Saturday on the eve of a deadline that will see the disputed area just outside of Nagorno-Karabakh handed over to Azerbaijan.

The town of Kalbajar and its surrounding district are to be returned to Azerbaijani control on Sunday under the ceasefire which was signed on 9 November by Azerbaijan President Ilham Aliyev, Armenian Prime Minister Nikol Pashinyan and Russian President Vladimir Putin.

After the ceasefire agreement was signed thousands of people poured out onto the streets of the Armenian capital of Yerevan to protest. Some demonstrators managed to force their way into a government building, occupying rooms and smashing furniture in the prime minister's office.

In Charektar, a mountainous village on Kalbajar border, at least six houses were on fire Saturday morning with thick smoke rising up over the valley.

In addition to Kalbajar, Armenians are set to cede control of two other regions to Azerbaijan by December 1.

Fighting between the separatists backed by Armenian troops and the Azerbaijan army erupted over the Nagorno-Karabakh region in late September.

Armenia said on Saturday that 2,317 of its troops had been killed in the fighting, an increase of almost 1,000 on the last confirmed death toll.

Azerbaijan has not revealed its military casualties.

Earlier this week Vladimir Putin said the combined death toll was higher than 4,000 and that tens of thousands of people had been forced to flee their homes.