Armenia: Pashinyan wins election with over half the votes

Prime Minister Nicol Pashinyan's main challengers, the newly formed Armenia Alliance, lagged behind with 21% of the vote, according to the election commission.

Nicol Pashinyan and his Civil Contact party won the Armenian parliamentary election with 53.92% of the votes, according to the country's electoral commission on Monday.

The win came after Pashinyan himself proclaimed victory in an earlier Facebook post, saying that the voters gave the mandate to his party and "personally to me to lead the country as prime minister." 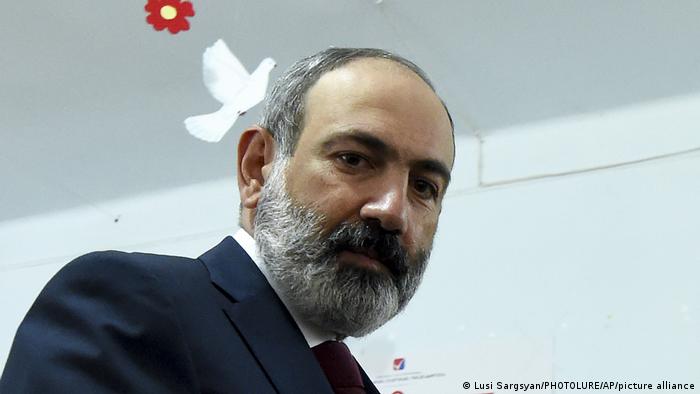 Kocharyan's party had earlier disputed the incomplete results, saying there were numerous reports of electoral violations.

"Large opposition rallies ahead of the elections, small events organized by the government, the trust crisis in the country indicate a completely different mood," the party said.

Observers from the Organization for Security and Co-operation in Europe (OSCE) declared the "overwhelmingly positive" election to have been "competitive and well run". Its report released on Monday said "fundamental freedoms key to democratic elections were generally respected" in Sunday's "highly transparent" polls.

Just one other party, led by businessman Gagik Tsarukyan, was likely to clear the 5% threshold and get seats in parliament, according to early results on Sunday evening.

Why were Armenians voting?

Pashinyan called the election after thousands of protesters took the streets over a peace deal he had signed in November.

The deal, brokered by Russia, ended a six-week conflict between Armenian and Azerbaijani forces.

But Azerbaijan managed to take control of large parts of Nagorno-Karabakh that Armenian forces had held for more than a quarter-century.

The disputed territory lies within Azerbaijan but had been under the control of ethnic Armenian forces — backed by the Armenian government — since 1994.

The results will be closely watched by other key players in the region, such as Russia and Turkey. More than 2,000 polling stations were taking part, with nearly 2.6 million people eligible to vote.

Who were the candidates?

The ballot included 21 political parties and four electoral blocs, but only two key political forces: the ruling Civic Contract party, led by Pashinyan, and the Armenia Alliance, led by Kocharyan.

Pashinyan, a 46-year-old reformist, swept to power in 2018, having pledged to get rid of corruption and forge closer ties between Armenia and the West.

Yet he has lost popularity among many Armenians after signing the Moscow-brokered peace deal to end last year's war with Azerbaijan over the disputed region of Nagorno-Karabakh.

Pashinyan said the truce was necessary to prevent further losses of territory and life, but stepped down from the premiership to allow the election to take place.

Opponents say he failed to carry out promised reforms, and that he surrendered territory to Azerbaijan under last year's peace deal.

Kocharyan served as Armenia's president from 1998 to 2008. He is closely tied to Russian President Vladimir Putin, and faces a corruption investigation from his own time in office. IIn a recent interview on Russian state broadcaster RT, he said he would engage in negotiations on Nagorno-Karabakh's borders if elected. Kocharyan, a former head of state, currently trails in second place, according to initial results

The 66-year-old has accused the government of rigging the vote against him.

A venomous election campaign saw candidates exchange insults and threats, and both front-runners were expected to stage protests after the vote.

President Armen Sarkissian has decried attempts "to incite hatred and enmity" and urged a peaceful election.

DW's correspondent Nick Connolly said Russia's influence will continue to be felt long after the election.

"In terms of the big picture, in terms of where Armenia goes from now, it's really just a choice of different degrees of closeness to Russia. There is really no other game in town for Armenia. Russia is the international guarantor of Armenia's borders."

"No Western power is willing to offer those sort of guarantees, so it's a question of total alliance with Russia or some engagement with the West, with Europe still dependent on Russia and its soldiers to protect this country from its much bigger neighbors," said Connolly.

Armenian Prime Minister Nikol Pashinyan has called a snap election, seeking to defuse a worsening political crisis. His firing of a military chief had deepened a rift caused by last year's conflict in Nagorno-Karabakh.

Nagorno-Karabakh: Returning to a new reality