After Nagorno-Karabakh conflict, uneasy calm prevails at new border | Europe | News and current affairs from around the continent | DW | 12.06.2021 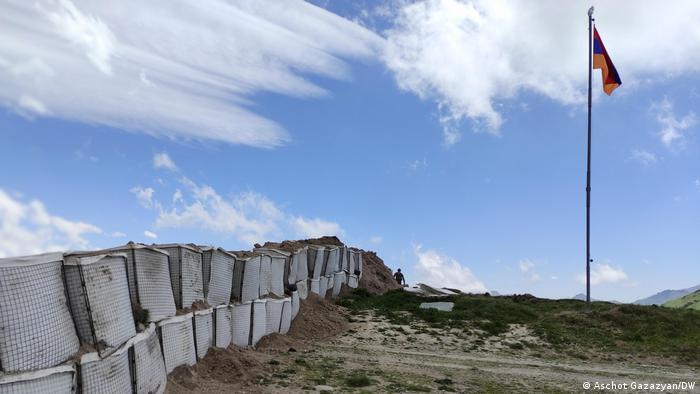 It's 170 kilometers (106 miles) from the Armenian capital, Yerevan, to the mountainous region of the Armenian province of Gegharkunik. Since the last clashes over Nagorno-Karabakh, it has become the border area between Armenia and Azerbaijan.

According to Yerevan, the Azerbaijani military advanced up to 4 kilometers into the new border area as recently as mid-May. In the process, it occupied more than a dozen heights near the Armenian villages of Kut and Verin Shorzha and began building fortifications. Both Armenian and Azerbaijani posts can be seen on the hills, sometimes with less than 15 meters (50 feet) between them.

During the Soviet era, Nagorno-Karabakh, inhabited predominantly by Armenians, was an autonomous region in the Republic of Azerbaijan. In the late 1980s, a bloody ethnic conflict broke out there, and the Caucasus region declared itself independent. The self-proclaimed republic also controlled parts of the surrounding Azerbaijani districts. In the 1990s, the situation was referred to as a "frozen conflict."

But in late September 2020, war flared up again, and an estimated 6,000 people died in fighting. The conflict ended after barely a month and a half through a cease-fire agreement announced by Azerbaijan, Armenia and Russia. Azerbaijan restored control over large parts of its former province of Nagorno-Karabakh and surrounding districts.

A struggle for survival

The village of Kut lies on the way to the outposts of the Armenian military. Today, fewer than a hundred people live there; only 18 children attend the local school. There are more Armenian soldiers in Kut than residents. The village has turned into a virtual fortress to guard against a possible Azeri attack.

The head of the village administration, Sima Chichyan, said the people here live as if on a powder keg. "We can no longer let our cattle graze in the meadows because danger now lurks at every turn. We have planted potatoes only in fields that are out of the line of fire. And now it's time for the hay harvest, but we probably won't be able to prepare fodder for the winter," she said. 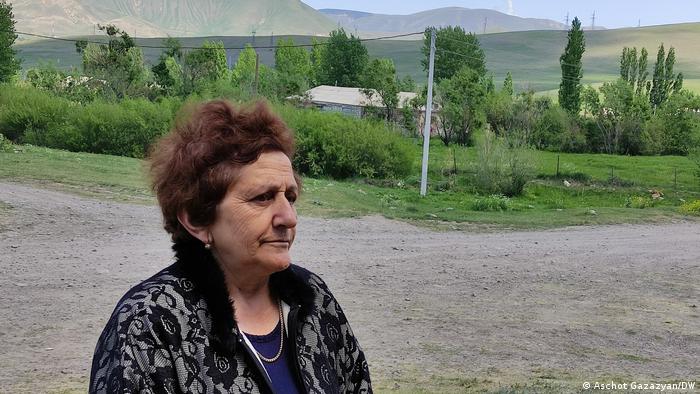 Sima Chichyan is worried about what the winter may bring

A resident of Kut who did not want to be named advised driving to the already fortified border between Gegharkunik and the Kalbajar district now controlled by Azerbaijan. "In the trilateral cease-fire agreement of November 9, there was a point about opening roads and communication links. But see for yourself what this looks like in practice," he said, clearly disgruntled.

Two roads connecting Gegharkunik with Kalbajar and further with Stepanakert in Nagorno-Karabakh are completely closed. On the road, in several rows, are hundreds of large wire baskets filled with stones and poured round with concrete. On the other side, fortifications of the Azerbaijani army are visible. Armenians say the Azerbaijanis already consider this section of the border delimited (legally agreed) and demarcated (physically designated). Soldiers watch each other, but there are no armed conflicts here. But the closures are affecting the region's economy. There are also no more bus lines to Nagorno-Karabakh, which is why tourists are staying away.

Dangers lurk at every corner

The next village in the border area on the Armenian side is called Verin Shorzha. Only a few families still live here. They only stayed because there are several soldiers in the village, the Armenian military said. The village was largely destroyed during the first war over Nagorno-Karabakh.

Since the latest fighting, the inhabitants of Verin Shorzha are also afraid to shepherd their cows and sheep to their usual pastures. They don't know where the respective military positions are located and where danger lurks. They now graze their cattle near their village and even in it — for example, in an old Armenian cemetery from the 10th century where tombstones have long been overgrown with red moss.

There is an increasing lack of grass here, but for inhabitants, livestock is almost the only source of income. Many say that recently, the Azerbaijanis fired on a herd and injured several animals. The residents claim they then chased them over the next hill, into their own territory. 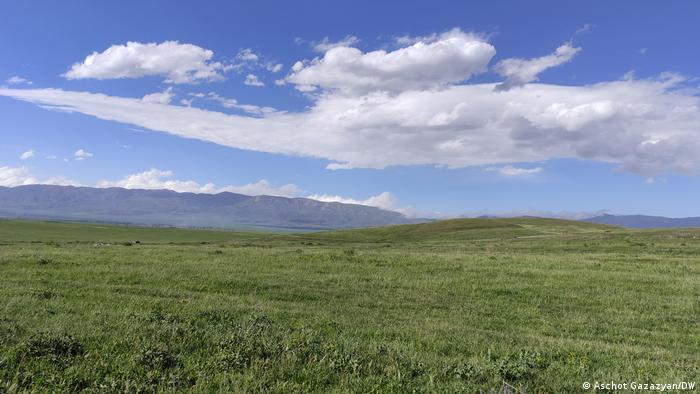 In the cemetery, several shepherds are playing cards. When asked how they assess the situation, they said, "Everything will be fine, our army is here ..." But actually, the villagers are just reassuring each other this way. In reality, what worries them is that the Azerbaijani positions are only 400 meters away from the fields and reservoirs. "We don't understand who is negotiating with whom, but the situation is getting worse. There is hardly any bloodshed, but that may change, and then open confrontation is inevitable," they say.

Not shooting, but some rough negotiations

The road from the village to a position of the Armenian army leads by car through high grass to a hill. There's a tent with a flag and fortifications made of old car tires, tree trunks and stones. Soldiers stand around, armed with machine guns and wearing protective vests and black masks. Only 10 meters away, Azerbaijani soldiers are stacking stones to build a wall. And on the neighboring hills are the firing positions of the Azerbaijanis, who are watching the events below closely. "We are military. But there are no orders to obstruct the Azeris in this area," an Armenian officer tells us. At all posts, soldiers confirm: Orders are not to open fire, but to try to resolve all disputes through negotiations. Warning shots in the air, however, are allowed.

From time to time, representatives of both sides meet at the contact line to discuss the situation and outstanding issues. In the process, the situation often gets out of hand, soldiers say. Representatives of both sides then allegedly poke and hit each other with rifle butts, shoot in the air and curse. Often, they sustain injuries such as bruises and cuts. Videos of such brawls keep surfacing on the internet. In one recent video, an Armenian soldier was even killed.

Where is the Russian military?

Today, it's difficult to track who controls which area in the mountainous region of Gegharkunik. Since the cease-fire agreement, there have been frequent border incidents in Nagorno-Karabakh. There has been no mutually recognized determination of the exact course of the border between the two countries. According to the Armenian side, that can happen only after the Azerbaijani military withdraws to its original positions. Meanwhile, Yerevan has turned to Moscow for military assistance.

However, despite the complex situation in the Gegharkunik region, there are no Russian troops here. They have established several posts in Armenian Zyunik and Goris right on the border with Nagorno-Karabakh. A group of the Russian 102nd Military Base stationed in Gyumri is housed there. The number of Russian border guards has also been increased. Additional Russian soldiers now control the airport in Sissian, Armenia.

This article has been translated from the German. The original was written in Russian.