Antisemitism in the Bundesliga: Don't call it racism 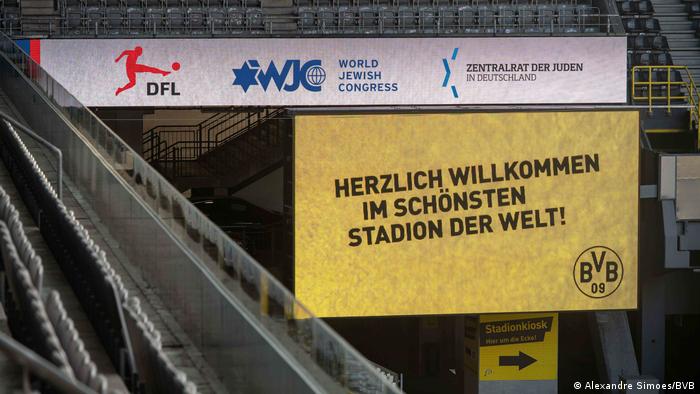 "Welcome to the most beautiful stadium in the world": Borussia Dortmund played host to an antisemitism conference.

Borussia Dortmund's Westfalenstadionplayed host to a conference this week to discuss the topic of antisemitism in German football and the fight against it.

The conference, titled "Antisemitism and Professional Football: Challenges, Opportunities and Networking," was organized by Borussia Dortmund in cooperation with the German Football League (DFL), the World Jewish Congress (WJC) and the Central Council of Jews in Germany (ZDJ).

It included workshops on various aspects of the ongoing battle against antisemtism, as well as on modern Jewish life in Germany in football and beyond.

The 150 attendees included representatives of 26 Bundesliga and Bundesliga 2 clubs, as well as high-ranking German politicians such as Felix Klein, the German government's commissioner for Jewish life in Germany and the fight against antisemitism.

The topic at hand had added relevance after a man was arrested on charges of producing a Nazi salute during the German men's national team's friendly against Israel in Sinsheim last Saturday.

Difference between antisemitism and racism discussed

One of the main points raised at the conference was an acknowledgement of what antisemitism actually is and how it differs from other forms of discrimination such as racism — a key distinction.

Pavel Brunnsen, an academic and author who researches antisemitism in football, said the difference between the two forms of discrimination expresses itself predominantly in the way the discriminator perceives its subject.

"The racist looks at his subject of hate from above, as inferior," he explained. "The antisemite looks above their shoulders, to their sides and above, where they believe there's a conspiracy of secret powers."

He added that expressions of antisemitism can be directed at both Jews and non-Jews, saying: "When fans of a football club portray the symbol of a rival club with a Star of David to mark it as 'Jewish,' there’s no need for actual Jews to be there."

The sanctions resulted in one block of Berlin's Olympiastadion, where Union played its European home games, being closed in order to display a banner with the text "No to racism," despite the fact the incident in question was, in fact, antisemitic.

On the other hand, Union's handling of the incident was also praised by some of the speakers.

Josef Schuster, the president of the Central Council of Jews in Germany, said that, unlike UEFA, the Bundesliga and the German Football Association (DFB) largely do a good job in getting the difference between the two right, and the same is true for many German clubs.

"They all have different characteristics, and the levels of success differ," Schuster said. "But there is indeed success."

Thanks to initiatives taken by clubs, supporter groups and education professionals at Germany's pedagogical Fan Projects in recent decades, there is an ever-increasing awareness of the topic of antisemitism in German football. Antisemitic chants are mostly a rarity at Bundesliga grounds.

It is no coincidence that the conference took place in Dortmund.

BVB's educational program against antisemitism has become an integral part of the club's social-responsibility department. In addition to offering educational trips to concentration camps in Poland, with fans, club employees and employees of the club's sponsors all taking part, the club also donated one million euros to the Yad Vashem Holocaust Museum in Jerusalem in 2019.

Moreover, the club was among the initiators of the Changing the Chants conference, which took place close to the Auschwitz concentration camp.

UEFA acknowledged the club's work by awarding it the Equal Game award in 2019. 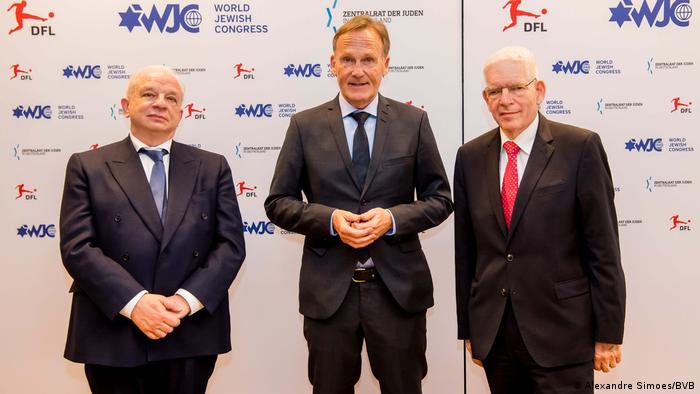 Borussia Dortmund CEO Hans-Joachim Watzke told DW that the fight against antisemitism became part of "BVB's DNA." He, too, made a point of distinguishing hatred of Jews from other forms of racism.

"Everyone knows that, when they identify with Borussia Dortmund, antisemitism is a complete taboo — otherwise, they don't belong here," he said.

Watzke said the need to be creative and find new ways to reach more people was something his club took into account.

"We always try things out. We won't run out of ideas in the next few years," he told journalists at the conference.

"Borussia Dortmund has 10 million fans in Germany alone — that's every eighth German," Schuster said. "I believe it sends out an important signal when such a club says a fan is only welcome if they distance themselves from antisemitism and racism."

Schuster said such statements could help fans reconsider their views. "If you feel left out as a fan, a thinking process could then begin," he said.

Football fans part of the solution

Many German fan groups — including hard-core ultras — have taken a clear stance against antisemitism in recent years, with some coordinating research into the stories of Jewish players, executives and fans who were murdered by Nazis.

Schuster said the many initiatives by supporter groups in Germany were a reason for optimism.

"When you look at Bayern Munich, it's the fans who have been heavily protesting against the club's deal with Qatar, where there's also a lot of antisemitism," Schuster said. "I believe this is a positive signal."

Brunnsen offered a similar take. "In the '80s, when hooligans dominated Germany's stadia, antisemitism was a thing of normality," he said. "But, since the 2000s, many ultras have been taking a stand against antisemitism.